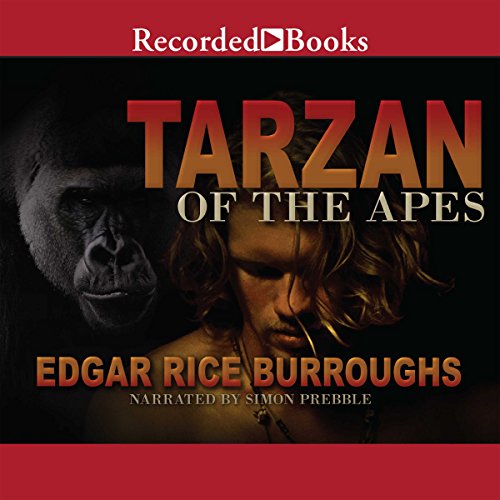 Tarzan of the Apes

By: Edgar Rice Burroughs
Narrated by: Simon Prebble
Try for £0.00

When Tarzan is orphaned as a baby deep in the African jungle, he is saved from certain death when he is adopted by a she-ape. Raised as one of her own, Tarzan learns the way of the Kerchak - the tribe of great apes who rule the jungle. They teach him how to survive, to hunt, to swing through the trees, and to communicate with the other animals of the jungle. By the time he is a young man Tarzan has the courage and strength of 10 men. But it is his human brain that allows him to be the King of the Apes. And Lord of the Jungle. But when his jungle domain is disturbed by the arrival of "civilized" men, Tarzan begins to wonder about his true identity.

What listeners say about Tarzan of the Apes

I truly enjoyed listening to Tarzan of the Apes. After sampling all the versions currently available I ended up choosing this version, narrated by Simon Prebble, and I am so glad I did. The narration was just perfect and my only disappointment was that he does not narrate the other books and I had to choose another narrator for book 2.

As for the book itself...it is a lot of fun. Edgar Rice Burroughs is becoming one of my favorite authors, having also enjoyed the John Carter books. Tarzan has a lot of different adventures and he doesn't meet Jane until well into the story...but EVERY adventure Tarzan has both before and after meeting Jane is interesting and fun to listen to. Due to the length...I was not able to listen to this all in one sitting but I REALLY wanted to and had a hard time turning it off.

The ending was rather sad and left me wanting more...so I have already downloaded and listened to the second book. You will not be disappointed in continuing this story if you enjoyed this first book.

Wonderful story well read by the narrator. I recommend it to those who love adventure.

all these years after it's release, Tarzan is still compelling. if you've seen the movies and think this anything like them, you will be surprised.

One of the Best Reads\Listens EVER!

I love Burroughs’ writing style. I’ve ‘read’ the entire series, plus all the John Carter series. I was an avid reader as a youth, throughout my teens, and into college. In adulthood, I easily solved problems, created efficiencies & offered improvements in processes, systems, projects. In grad school, it was noted that I had higher than average intelligence. I believe it was the reading of the great writers, which I attribute to it all!

Loved the pace of the book and will certainly read the next. great rendition of that time of exploration.

Such a Great Story

So much better than any Hollywood movie. It's very savage and violent and that's how it should be when you think about it. Brilliant narration and perfect pacing that moves the story right along very smoothly. I can't recommend this audiobook enough. I absolutely loved it.

Awesome book, great reading! The narrator was amazing! For those looking for the Disney version, this is not it, but leaves me wanting to really find the sequel books!

I'm very fussy about narration and this performer is as good as they get. I am not writing more because I'll die if I don't download book 2 immediately.

The narrator is perfect. The prose is succinct yet expansive. The conjured imagery is beyond modern silver screen technology. Don't miss this.

I tried to hang in there for the story--which had great potential--but the ending stuck.