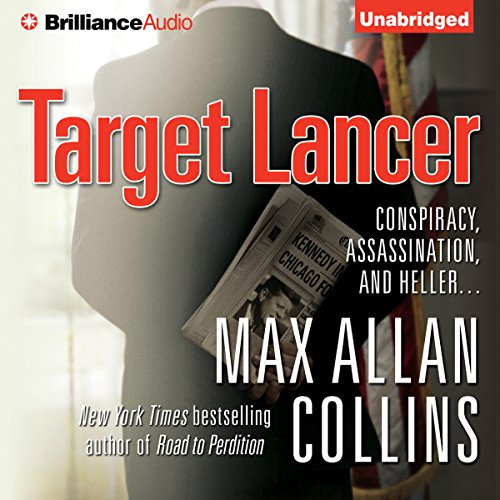 1963: John Fitzgerald Kennedy is a lightning rod for public opinion. The handsome, youthful leader, who is prepared to take America into a brighter future, earns love from cheering crowds. But those who oppose his political agenda - including some who consider themselves betrayed by the Kennedy clan - dare to think the unthinkable: kill an American president.

Nathan Heller is Chicago’s most celebrated private detective, hobnobbing with Hugh Hefner, getting written up in Life magazine, enjoying the fruits of a long career that began in a one-room office and now is a coast-to-coast agency. When he does a small favor for a friend - who handles PR for the Teamsters - Heller runs into an old West Side mob crony, a small-time hustler named Jack Ruby. And when that friend is found dead, warning signals start to flash.

Suddenly Jimmy Hoffa wants to talk to Nate...and so does Hoffa’s arch enemy, U.S. Attorney General Robert F. Kennedy. Back in ’61, Heller acted as the reluctant matchmaker in the ungodly marriage between the Mob and the CIA that created the ill-fated, JFK-sanctioned plot to assassinate Fidel Castro. Now JFK is coming to Chicago and Cuban assassins have been reported in the Windy City. RFK appoints Heller as a "consultant" to the local Secret Service, knowing that Nate understands why conspirators might well target the man code-named "Lancer".

It’s a big job for a PI. But with a murder to avenge and a mystery to solve, Heller’s up for the challenge.

Rigorously researched, fleshing out a little-known but vital piece of the JFK assassination puzzle, Target Lancer is charged with the electric suspense of real events, and is far more truth than fiction.

The Best Nate Heller Yet

Well, maybe it's the best yet because it's the latest.

Every one of the books in the Nathan Heller series has been excellent: meticulously researched and expertly written by Max Allan Collins, and narrated with perfect pitch and atmosphere by Dan John Miller.

Foremost on my mind when I downloaded this book the day it was released were the recent disappointments I had suffered with other latest books by my favorite authors. John Grisham brought me to tears with The Broker: it was that bad. Hordes of fans stood in virtual lines to download Michael Connelly's latest Harry Bosch, only to find a so-so story read by a blah narrator.

This book sure wasn't a disappointment. It has everything we've come to expect from Nathan Heller and the A-1 Detective Agency: mobsters, famous politicians, petty crooks, labor union thugs, cops, and fan-dancers, all combined in a wonderful period piece set in 1963 Chicago. It's the month before John Kennedy's assassination and the town is crawling with made men, mad Cubans, and an ex-Marine who bears a strong resemblance to Lee Harvey Oswald. Nate gets recruited by Attorney General Bobby Kennedy to help out with the protection of the president during his upcoming visit to Chicago. The presidential motorcade route goes right through a warehouse district (where the ex-Marine works) where the cars have to slow for a turn onto a downtown street. Brush up on the history of Kennedy's assassination before you read this one: lots of familiar players pop up.

Dan John Miller has the perfect voice for the wise-cracking but tough as nails Private Eye. When he talks you see trenchcoats and snap-brim fedoras and smell unfiltered Camels. He does the rest of the cast just as well. Mob killer Chuckie Nicoletti sounds suitably menacing, and his sidekick "Mad Sam" DiStefano sounds as crazy as his Wikipedia picture looks. Miller does a suitable female voice, and there's no suspension of disbelief required when Sally Rand speaks.


This book was really hard to put down. At a little over eight hours in length, it can be finished in one serious session, or in a few days if you have to go to work. If you do read it straight through you'll wish you could forget what you heard and start all over.

Newcomers to Nathan Heller can feel free to start with this or any other book in the series. I'm not sure, but I believe they were written and published well out of the chronological order of the events portrayed. Each is a standalone work, with references to other books provided but not essential to the plot. So when Nate goes to see Bobby Kennedy, a reader of the whole series would know there is bad blood here (over that Marilyn Monroe thing), but Collins clears that up with a few lines and the action moves on.

I think Collins mixes up his service academy football schedules a little. I thought I heard him say at one point that the President was going to attend the Army-Navy game during his visit. That would have been Army-Air Force, on 2 November. Army-Navy was 7 December (and featured Heisman winner Roger Staubach - I was there!)

It's a great book in a great series. Don't miss it.