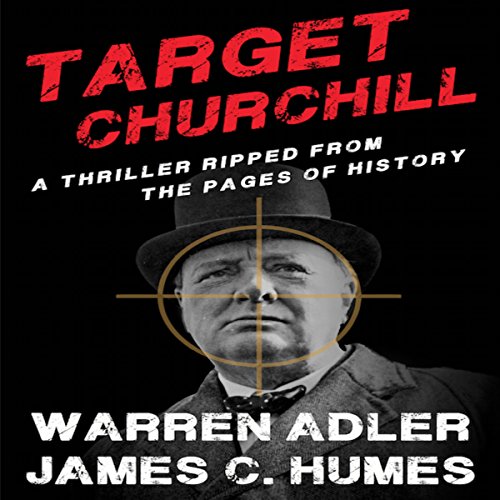 Target Churchill is an Amazon best-selling historical thriller written by Warren Adler (The War of the Roses) and Churchill biographer James C. Humes. Target Churchill has consistently ranked higher than 10,000 on Amazon's Best Sellers rank and is currently in development as a movie with Grey Eagle Films and sales-financing company The Solution Entertainment Group.

As Great Britain and the United States celebrate a victorious end to WWII, Joseph Stalin's relentless Soviet Union is creeping across Eastern Europe, leaving a trail of devastation and murder in its wake. Winston Churchill, the cigar-puffing icon of the British fighting spirit, embarks on a crusade to lift the veil of secrecy that hangs over Stalin's mission. Westminster College in Fulton, Missouri sets the diplomatic stage upon which the world's political players grapple for supremacy as Churchill delivers his fated Iron Curtain speech on March 5, 1946.

Soviet operatives have infiltrated British and American governments at the highest level. As Churchill prepares to launch the Cold War, Stalin unleashes his trained mole, an American Nazi who served in Hitler's SS. His mission: assassinate Winston Churchill. Churchill travels with a lone bodyguard, W.H. Thompson, a former British police officer who protected Churchill faithfully through the turbulent years of war. Thompson alone senses danger, but will his trained instincts and vigilance be enough to protect the former Prime Minister from a ruthless killer?

In this gripping historical thriller, battles are fought not on the beaches, on the landing grounds, in the fields, on the streets or in the hills, but behind closed doors in the shadows of espionage.

Captivating narration of an intriguing story

Masterful use of character voices draws you in to a throughly believable and compelling story.

"To give it up for him would be an honour.'

What made the experience of listening to Target Churchill the most enjoyable?

Mr.Adler is a very versatile writer, not being bound by any genre. But all of his books share three things in common: great story, well written and wonderful three dimensional characterisations. This historical thriller is no exception. Blending known facts and personalities with creative fiction, he creates an atmosphere of immediate post world war attitudes as we are introduced to several of the main players of the time including Churchill himself and his immediate family, Baria's subordinate and supporter of Stalin, and President Truman. The other main protagonists include Churchill's longtime bodyguard and friend, Donald MacLean, the first secretary at the British Embassy in Washington, and a young American nazi S.S.officer, captured by the Soviet army and spared death to be a sleeper in the U.S.A. All are so perfectly sketched they come alive.
This reality is increased by the narration of Nick Howden-Steenstra who both gives separate voice to each individual as well as a pretty good impersonation of Churchill's most memorable way of speaking. Between the dialogue, his pleasant reading is clear and easy on the ear.
The storyline follows three intertwined main themes: Winston Churchill, himself, and his fears for the future of the free world; the Soviet hopes of increasing power, both nationally and personally;and the life of the young, brash American born nazi recruited into the soviet's service. All strands come together at the tense and exciting ending.
A most enjoyable, well executed book: my congratulations to both authors.
And my thanks to the right's holder who sent me a complementary review copy, via Audiobook Boom.

Let me start by saying that I didn't know very much about Winston Churchhill when I started reading this book. At the end of the book I found myself doing a lot of research about the man. I would recommend target Churchill to anyone who is interested at all in history. Although it is a historical fiction novel you can not help but to be interested in the actual characters in the book. Take for example Sarah Churchill her character was so interesting and intriguing I found myself doing research on her. Needless to say I loved the book and would recommend it to anyone who enjoys reading. I received this book at no cost to me from the author narrator or publisher for an honest review

I liked this book. I am a history fan who likes to learn more about WWII when I can. Somehow, though, I have neglected to focus on Churchill in my reading, usually preferring to know more of the nazi and jewish side to the war.

It was definitely worth listening to and I appreciate the seamless way the fiction is merged in with the factual throughout the book. So many people know who Churchill was and his 'Iron Curtain' speech but do not know the man. This book is worth the time spent listening. It is well written and well read and thoroughly gratifying.

If you could sum up Target Churchill in three words, what would they be?

Which character – as performed by Nick Howden-Steenstra – was your favorite?

I loved the way the narrator performed this audiobook. He had a quintessential zeal, and feeling in this voice that made it a worthwhile listen. He made the characters come to life and did a great job with difficult names too!

Yes, narration did the book justice, making it a good listen.

narration was the best part. it seemed like it could happen in the real world.

A superb and well-written book

This was a really well-written book - highly enjoyable and face-paced. I enjoy historical fiction and this story takes place during a time that I didn't know much about. I thought the characters were interesting, and I liked learning more about Winston Churchill's private life and family, as well as other important historical figures (Truman, etc.). I listened to the Audible audio version of this book narrated by Nick Howden-Steenstra. This is the first book I have heard him narrate, and I was thoroughly impressed. He is quite versatile when it comes to characters and he is quite adept at accents. I was even impressed with his Russian name pronunciations. Most narrators I have heard use the Americanization of the name, which is annoying (ex. Ivan = I-van). This narrator actually used correct pronunciations (ex. Ivan = ee-VAHN). It sounds so much better to the ear. I think I would actively look for books narrated by Howden-Steenstra because I was really impressed by him. And I am already a fan of Warren Adler's books. Though I haven't read many by him, each one I've read has been excellent. I highly recommend this book.

NOT a REHASH OF "The Eagle Has Landed"

Where does Target Churchill rank among all the audiobooks you’ve listened to so far?

This isn't a retelling of the excellent "The Eagle Has Landed". It takes place in a later, still factually accurate era. That's as far as I will compare it. It's well written entertainment, and as far as other Warren Adler audiobooks, the best story, so far. It's an historical action thriller.

What other book might you compare Target Churchill to and why?

The aforementioned Jack Higgins work only in regards to historical figures - Winston Churchill and his enemies who perceived him a threat for his abilities to rally for Democracy.

Have you listened to any of Nick Howden-Steenstra’s other performances before? How does this one compare?

I have not. I'm a bit on the fence about the narration. On one hand Howden-Steenstra has a very clear resonant voice. Adding a lot to the audio book as a whole. On the other hand, he has to voice for Winston Churchill, one of the most recorded, recognizable voices of the Twentieth Century. And for FDR and Harry S. Truman, other oft recorded and heard voices. Just didn't QUITE succeed.

Without spoilers, when the would be assassin finds something to divert his plot. Or for awhile anyway.

This is my favorite Warren Adler book I've listened to out of four or five. Though there were shortcomings regards narration, overall, it too was well done. I'm a Churchill fan so may be more familiar with his voice than others may be.

Thank you for the opportunity to enjoy and review Target Churchill.

I received this audible edition for free for my honest review.. gritty and real. highly recommended for true fans of great novels.. believable characters, should be a movie. expertly written with exquisite narration.