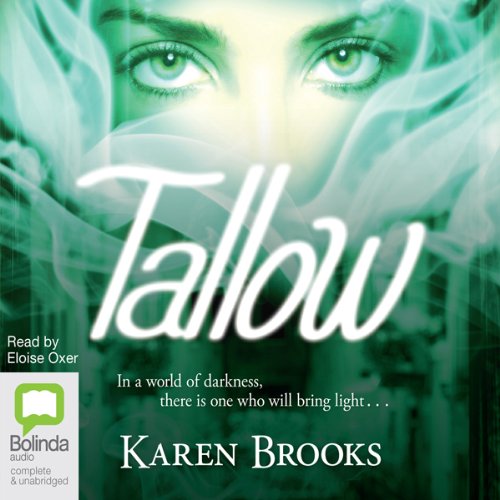 By: Karen Brooks
Narrated by: Eloise Oxer
Try for £0.00

On the edge of a mystical border called the Limen, close to a beautiful canal-laced city, a humble candlemaker rescues a child, whom he raises as his apprentice. Years pass and the child's unusual talents are revealed, the gentle art of candlemaking slowly transforming into something far more sinister. Lingering in the shadows, enemies watch and wait - a vengeful aristocrat, an exotic queen and the lethal creatures known only as the Morte Whisperers.They hunger after the child's ancient magic and will do anything to control it - betray, lie, manipulate. Even murder.

A story of intrigue, deadly magic, and a love so deep it transcends life.

What listeners say about Tallow

A sad yet hopeful story

Would you listen to Tallow again? Why?

Yes. It left me wanting to know more.

Eloise Oxer did a very good job with this story. I will be looking forward to the other books in this series.

A sad, and yet, hopeful story. Tallow lives with much angst, deception and loneliness. She learns she is of a race which has been hunted for the past several centuries and is the reason she must go about as unnoticed as is possible... as a boy.

Fear of self - being noticed - getting caught - loosing friendships. Dressing and living as the opposite sex, for safety. Learning to use magical abilities, learning self confidence. Selflessness, selfishness, greed, friendship, love, family, adventure, good vs. evil, a city much like Venice, imbuing emotion into wax - happiness - love - comfort - etc, merchants and guilds, mentor, secrets, a boy and a dog.

The tale is left with somewhat of a cliff hanger. If your one who despises this, then have the next book available to read.

A great fantasy read. All of the characters are believable and presented in a story that you can feel yourself being part of the action... of which there is plenty! The story of a young boy (or is he?) who finds himself in a struggle for survival while unknowingly is a pawn for some and the source of redemption for others.

This first in a series is well worth your time and money. Well written, excellent narration and one in which you will find yourself identifying with the characters and their struggles.

Interesting characters whose true motives are slowly discovered. a little predictable at times but twist and turns more than make up for it.