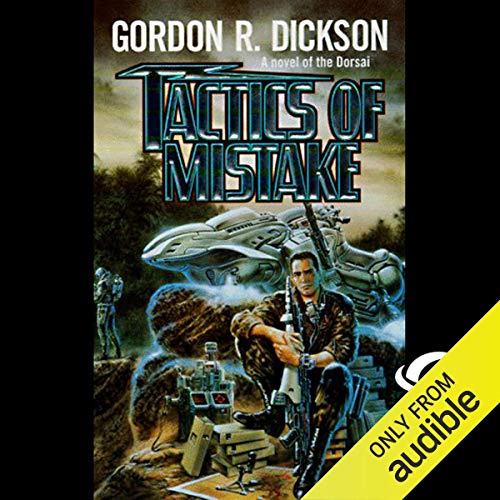 It's obvious that Cletus Graeme - limping, mild-mannered scholarly - doesn't belong on a battle field, but instead at a desk working on his fourth book on battle strategy and tactics. But Bakhalla has more battlefields than libraries, and Graeme sees his small force of Dorsai - soldiers of fortune - as the perfect opportunity to test his theories. But if his theories or his belief in the Dorsai lead him astray, he's a dead man.

this is the first of the Dorsi books I read ant it remains my favourite.

I was totally surprised by Dickson. I had never heard of him or his series but the combination of action and deductive reasoning kept me eager to get to the next sequence of events throughout the the book. Always careful of honor, loyality and leadership to win the hearts of those around him.

These, in the day when heaven was falling,
The hour when Earth's foundations fled,
Followed their mercenary calling
And took their wages and are dead.

Their shoulders held the sky suspended;
They stood, and earth's foundations stay;
What God abandoned, these defended,
And saved the sum of things for pay.

"Epitaph on an Army of Mercenaries" by A.E. Housman

Unfortunately for us the series is not complete the author died before finishing the series without leaving any notes about his view of Dorsai universe.

This means we will never get the full picture, but it gives us an opportunity to read only the best!!!!

IMHO only two of the books worth reading :
1. "Dorsai"
2. "Tactics of Mistake"
and maybe "Necromancer"

the other books in the series do not match the high standards of these two.

Tactics of Mistake is a Prequel and tells about the time before the Dorsai, the time when the colonization only began and dorsai tactical doctrine and training just began it's long way to be the best.

The Origin of the Dorsai is fascinating

You never know the time line is in these Dorsai novels. You hope for recurring favorite characters but that rarely happens. What does happen consistently are well thought out stories that are thoroughly enjoyable. Yes, thus far they are very Male based novels and the treatment of women is disappointing but the overall story does make up for that. I am hooked on this universe.