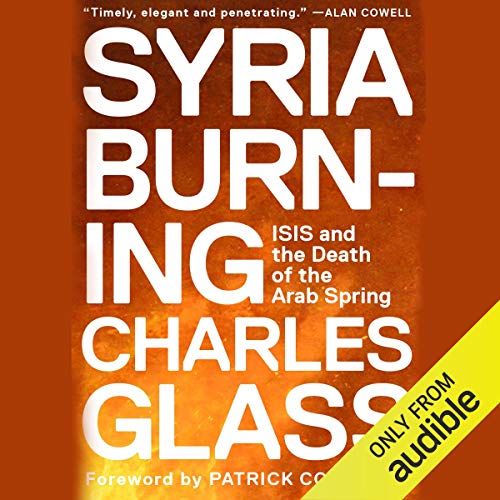 ISIS and the Death of the Arab Spring
By: Charles Glass
Narrated by: Joe Barrett
Length: 2 hrs and 55 mins
Categories: Non-fiction, World Affairs
4 out of 5 stars 4.0 (7 ratings)

Since its commencement in the upsurge of the Arab Spring in 2011, the Syrian civil war has claimed in excess of 200,000 lives, with an estimated eight million Syrians, more than a third of the country's population, forced to flee their homes. A stalemate now exists in the country, with the government of Bashar al-Assad maintaining its grip on most of the cities in the west while large swathes of the countryside in the north and east are under the control of the Islamic fundamentalist groups ISIS and the Nusra Front.

The caliphate announced by ISIS in the summer of 2014 occupies some 35 percent of the country as well as vast territory across the border in Iraq. The nuances of this conflict have never been well understood in the West, least of all, it seems, by governments in the US and Europe, who, anticipating Assad's sudden departure, made it a condition of any negotiated settlement. The consequences of that miscalculation, Charles Glass contends in this illuminating and concise survey, have contributed greatly to the unfolding disaster that we witness today.

Glass has reported extensively from the Middle East and travelled frequently in Syria over several decades. Here he melds together reportage, analysis, and history to provide an accessible overview of the origins and permutations defining the conflict, situating it clearly in the overall crisis of the region. His voice, elegant and concise, humane and richly informed, is a vital antidote to the sloganizing that shapes so much commentary and policy concerning the civil war.

War reporting is extremely important in understanding the complexities of today's global conflicts. And the only real way to do it is to put yourself in harm's way and embed with people indirectly or even directly involved in the war. Charles Glass is one of the greats because he has always been brace enough to do just that. The stories he tells are moving. The historical context he provides is crucial. And his analysis is spot on. Nobody fully understands the Syrian Civil war, but Charles Glass is about as close as you can be.

Needed Insight into the Real Syria of Today

Definitely. Until recently, Syria was a tolerant country richly blessed with various people groups, productivity and prosperity. Charles Glass does a great job of narrating its’ precipitous decline into chaos and ruin. There was,as usual, a cast of countries with their own self interest at heart as helpers in the decline. Russia,et. al. opened borders and provided weapons and air power to protect Assad. Most f their targets were civilians, silos and hospitals. The rebels, not coordinated or fighting for an established goal, became ISISwith assistance from the US,Saudi Arabia, Quatar,France and Britain. Hillary Clinton said that Assad must go, but never put anything in place to be helpful. Essentially, it boils down to everyone fighting everyone in a country that used to be noted for tolerance.

Mr. Glass used his contacts, established over many years, to form an intelligent assessment of what is really going on..essentially...a lot of dead people for no real reason.

This is not a happy story. As farmers were displaced and had to move towards the cities, they continued their old way of life as much as possible. They threshed their wheat on the sidewalks and continued to live in one room as always. Now, of course, everyone but Assad and his minions are displaced.

I actually had to listen to it twice because I couldn’t really give it my full attention, the first time through when I was mainly trying to imagine what was going on in Aleppo during the evacuation of “rebels” who were usually anti-Assad, but not fighters. So,yes, this is a book where every word counts and continuity of the listening is particularly important.

I think this book helped me to understand a little better why a beautiful country is now in ruins. It began way back when the Ottomans were disestablished in the dawning of the 20th century. It is another proof where the normal people of a country are completely trampled by the interference of other countries”who are sure they know what is best.

The authors bias is insufferable.

Skip this book unless. I'll sum it up for you. The problem is basically the west's fault and Israel is the worst. Save yourself the time and the credit.

2 of 8 people found this review helpful