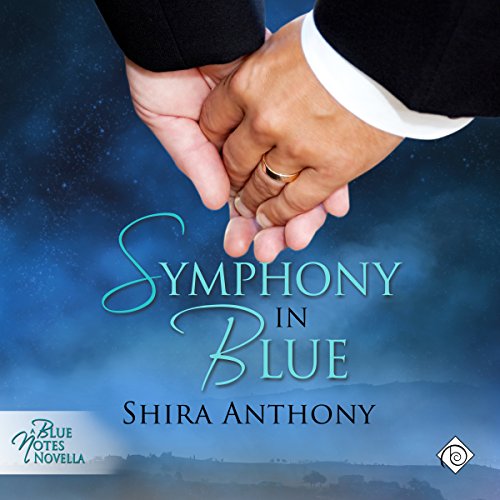 Are you a fan of the Blue Notes series? Would you like to know where the couples from the first four books are now? This is your chance to catch up!

Aiden and Sam are finally getting married. But when Cary and Antonio's baby daughter makes her appearance a bit earlier than planned, the big reception is put on hold. David Somers normally conducts orchestras, but this time he devotes his energy to "conducting" his friends so that everyone can join him at his Milan villa for a reunion at an intimate Thanksgiving dinner.

Sam and Aiden, Jules and Jason, David and Alex, and Cary and Antonio are soon assembled, and each couple shares something they are thankful for. Played out in four movements, this symphony is a celebration of friendship and love, orchestrated by David.

Fans of the series get to see the couples from the first four Blue Notes stories come together in Milan for Thanksgiving. Lighter in angst, the couples reminisce and tell each other why they are thankful for each other. We get a chance to remember how everyone came together, what it is that we love about them, and see how they've been doing in the years since we last got to see them.

another great addition to the series

In books 1-4 we met these characters: Jules and Jason (Jazz musician and manager), Aiden and Sam (Lawyer and Opera Singer), David and Alex (Musician and Conductor) and Tonino and Carey (Lawyer and Cellist). They all had their love stories to tell. This is after. They’ve gathered for Thanksgiving both to celebrate the holiday and to wish Aiden and Sam congratulations on their engagement and to welcome Tonino’s and Carey’s new baby girl to the world.

Each couple has a little something “more” to add – but I’m not telling!

This was a very sweet “epilogue” of sorts and fun for fans of the series. If you haven’t read the books I doubt you’d be as entranced, but I’d recommend reading the entire series to fans of great writing, romance and music.

The audiobook is absolutely amazing! I have loved Peter B Brooke and his narrations of the previous four books, so I was cautious about this one. Why did they change? Will he be as good. There were ways that he was as good and in some areas I think even better. I LOVED it. He really and truly “acted” in the touching scenes like when Carey and Massi have their “moment”. He does all the accents very well and the kids and women too.

I very highly recommend this book and the audiobook and give it 6 of 5 hearts.

I loved catching up with these guys! I happy that the author gave us this snippet into where they are now.