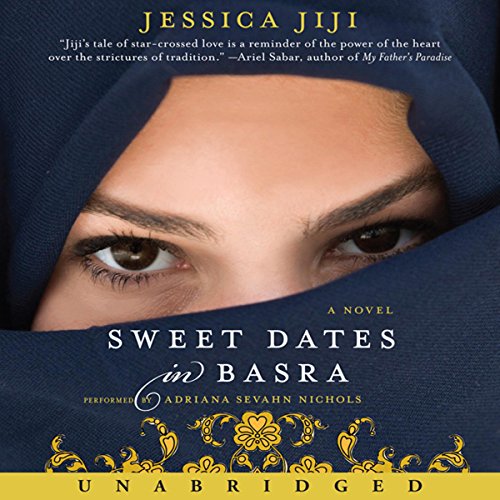 By: Jessica Jiji
Narrated by: Adriana Sevahn Nichols
Try for £0.00

Just when her family should be arranging her marriage, Kathmiya Mahmoud, a young Marsh Arab maiden, is sent from her home in Iraq's idyllic countryside to the unfamiliar city of Basra, where she must survive on her paltry earnings as a servant. Her only asset - her exquisite beauty - brings more peril than peace. Worse, her mother appears to be keeping a secret about her own mysterious past, one that could threaten Kathmiya's destiny forever.

In this lost Iraq of the 1940s, a time of rich traditions and converging worlds, Kathmiya meets Shafiq, a Jewish boy whose brotherhood with his Muslim neighbor, Omar, proves that religion is no barrier to friendship. But in a world where loss of honor is punishable by death, the closeness that grows between Kathmiya and Shafiq becomes dangerous as a doomed love takes root. When British warplanes begin bombing Iraq and the country's long-simmering tensions explode, the power of an unbreakable boyhood bond and a transcendent love must overcome the deepening fractures of a collapsing society.

Set during the tumultuous years surrounding the Second World War, Sweet Dates in Basra is the redemptive story of two very different cultures, and a powerful reminder that no walls can confine the human spirit.

“[T]he cultural perspective and setting are a nice break from the wartime norm, as is the unexpected ending.” ( Publishers Weekly)

What listeners say about Sweet Dates in Basra

There was a lot in this novel - the situation of the Jewish community in Iraq in the 1940s, the struggles endured as a maid coming from a poor background in the Marshes to work in bustling Basra, and the problems of friendships between different cultures and between unmarried men and women.

There are two main charcters, Shafiq, a young Jewish-Iraqi, who starts to feel the effects of anti Jewish sentiment in Iraq as he reaches his teens, and Kathmiya, a beautiful young girl from the Marshes who should be entering into marriage at this age but finds herself shipped off to work as a maid in Basra.
Kathmiya can't understand why she is not getting married like her sister Fathima, and why her father seems to hate her so much. But she makes the best of her life in Basra and works hard.
There she is noticed by Shafiq, who is stunned by her beauty. In this society it would mean certain death for Kathmiya if her friendship with Shafiq were ever discovered and the relationship can have no future.

The other main relationship in the book is between Shafiq and his Muslim neighbour, Omar. Not only are the boys best friends, but the families help each other in numerous ways over the years in a society where such friendships are becoming increasingly problematic.

Jessica Jiji has never lived in Iraq but learned of this time in history from her father who left the country in 1947 as an 18 year old. HIs love for his homeland is reflected in her warm feelings towards this place and time. In spite of all the problems, I felt this affection and became involved in the narrative as it unravelled.

I listened to the unabridged audio version of this book, excellently narrated by Adriana Sevahn Nichols, but I have to admit I struggled with the names of all the secondary characters, which can't be back referenced on audio.
Possibly better to read this than listen to it, but certainly recommended.

Although well written and narrated - I couldn't finish it. I expected it to be more adult oriented - but I think it is better suited for an adolescent audience.