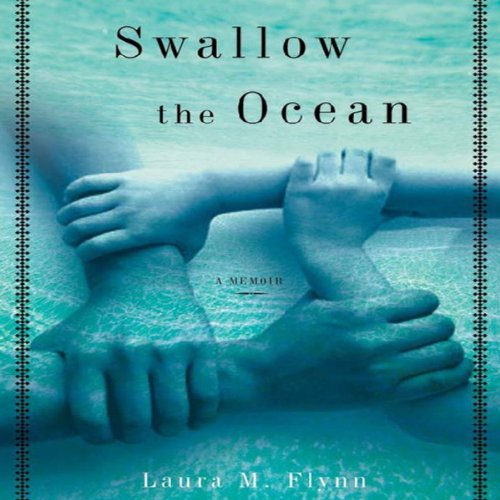 Charismatic, beautiful Sally Flynn was the center of her daughters' imaginations, particularly Laura's. Without warning, life as they knew it changed as paranoid schizophrenia overtook Sally. Whether it was accusing Laura’s father of trying to win her over to the side of Satan, or buying only certain products that were evil-free, glimmers of her mother’s future paranoia grew brighter as Laura’s early years passed. Once her husband left the family and filed for divorce, Sally’s symptoms bloomed in earnest, and the three girls united in flights of fancy of the sort their mother had taught them in order to deflect danger.

Set in 1970s San Francisco, Swallow the Ocean is a searing, beautifully written memoir of a childhood under siege and three young girls determined to survive. In luminous prose, this memoir paints a most intimate portrait of what might have been a catastrophic childhood.

Where does Swallow the Ocean rank among all the audiobooks you’ve listened to so far?

WIthout telling you how you should feel, or interpret her memories on paper, you get a very good insight into the way it is growing up around this illness.
Have read a number of such books, but have always found the adult looking back too navel gazy and retrospective. This is a recollection fo experiences, that is raw and honest.
Great book, especially if you yourself have experience something similar.

Living in the Logic of a Parent's Delusion

In Swallow the Ocean, Laura M. Flynn describes what it was like when, as a child, her world fell apart. Her confident, beautiful mother was overcome by paranoid schizophrenia.

“I lived in her world, and even if none of this was real to other people, the consequences were real to me.”

While there are a lot of mental illness memoirs out there, Flynn’s stands out for her seamless writing, her evocative remembrance of Seventies San Francisco, and her ability to make clear the childhood logistics of having an unstable caregiver.

Narrated by Julie McKay who has a really nice emotive range, and sympathy for the nuances of the narrators emotions.

I enjoyed the author's re-telling of the stories she created with dolls as a child paralleling her confusing and chaotic world as a child. As a psychotherapist, I search out stories that better help me understand diagnoses from a humanistic perspective: a way for me to understand better what my clients or family of clients might be feeling regarding mental illness. It also helps me give insight to clients who may be going through simile situations which has proven to be very therapeutic. Thank you for sharing this heart-felt story about your love for your mother.