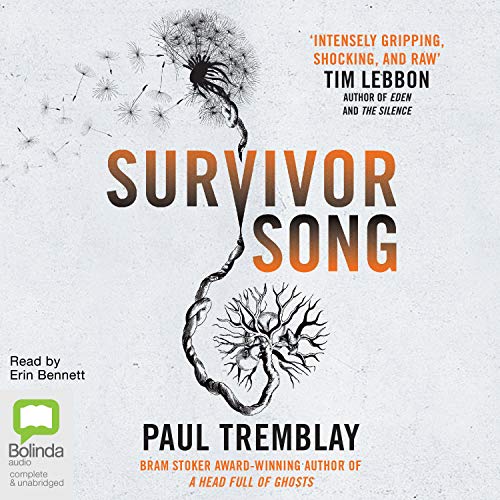 By: Paul Tremblay
Narrated by: Erin Bennett
Try for £0.00

A riveting novel of suspense and terror from the Bram Stoker Award-winning author of The Cabin at the End of the World and A Head Full of Ghosts.

In a matter of weeks, Massachusetts has been overrun by an insidious rabies-like virus that is spread by saliva. But unlike rabies, the disease has a terrifyingly short incubation period of an hour or less. Those infected quickly lose their minds and are driven to bite and infect as many others as they can before they inevitably succumb. Hospitals are inundated with the sick and dying, and hysteria has taken hold.

To try to limit its spread, the commonwealth is under quarantine and curfew. But society is breaking down, and the government's emergency protocols are faltering. Dr. Ramola 'Rams' Sherman, a soft-spoken paediatrician in her mid-30s, receives a frantic phone call from Natalie, a friend who is eight months pregnant. Natalie's husband has been killed - viciously attacked by an infected neighbour - and in a failed attempt to save him, Natalie, too, was bitten. Natalie's only chance of survival is to get to a hospital as quickly as possible to receive a rabies vaccine. The clock is ticking for her and for her unborn child.

Natalie's fight for life becomes a desperate odyssey as she and Rams make their way through a hostile landscape filled with dangers beyond their worst nightmares - terrifying, strange and sometimes deadly challenges that push them to the brink.

Paul Tremblay once again demonstrates his mastery in this chilling and all-too-plausible novel that will leave listeners racing to the end...and shake them to their core.

"Intensely gripping, shocking, and raw, Survivor Song is a visceral ride through a couple of hours of a deadly disease outbreak. Tremblay pulls no punches, but you wouldn't want him to - his characters are real people, and it's the brutal honesty that helps this terrifying song soar." (Tim Lebbon, author of Eden)

"Brutality spreads in this novel as swiftly as the wild epidemic Tremblay has invented. A daring, terrifying work packed with horror, but also with larger questions about what meaningful survival might be." (Idra Novey, author of Those Who Knew)

What listeners say about Survivor Song

A tale of desperation, despair and survival

I really enjoyed this audiobook - if 'enjoyed' is the word, as it's quite a harrowing tale. It takes place over only a few short hours of time (apart from the epilogue), and Paul Tremblay has done a marvellous job in conveying the terror, desperation, hopelessness and determination to survive that is demonstrated by the two protagonists, best friends Nat and Ram. The friends are wonderfully realised characters and I loved them both, which made the trials they go through even more hard to bear. The story is simple and very moving, and very well narrated by Erin Bennett. A little bonus for a native of north east England (like me) is the mention of recognisable local places and landmarks in and around Newcastle!

Audible has this categorised as a horror novel, but I consider it to be more of a thriller. If you go into this expecting to be scared then I think you’ll be disappointed. The plot is reasonably fast paced and is compelling enough that I got through the entire book in a single day.
One thing that may be off-putting for some people is that the book is written in the present tense, which I found rather jarring at first, but I eventually acclimatised to it. That said, I don’t think it really adds much to the story, so I’m not sure why the author made this choice.
I’d say the performance is the weakest aspect of the book. The narrator had a rather flat voice, which kind of reminds me of text-to-speech programs. Her efforts at male voices were particularly immersion-breaking. Of course, you can listen to the sample and come to your own judgement on this point.
Overall, despite this audiobook having its weak points, I found it to be a reasonably well-crafted story that didn’t outstay its welcome.

Was really looking forward to this but I'm so disappointed. Found it boring and struggled to get through it and that's saying something as it's only 8 or so hours. Very poor

Very disappointing. Boring, slow, annoying writing style and characters. To think that I renewed my subscription for this...

I really enjoy Paul's books his writing style is just my cup of tea. I honestly thought I knew what was coming after being surprised in his other books however again he has managed to surprise me. I went on an emotional rollercoaster with these characters I fell in love with them, cry with them and cheer them on in hope. I read this in 2021 and honestly can feel the dread the charters go through of an unexpected virus (I wonder where this idea came from).

If you haven't read Disappearance at Devil's Rock you might want to read or listen to that first as some characters make a return which I won't forgive Paul for (He knows what he did).

Good Story and a quick listen

Listened to this on audio.

Good story which kept me interested throughout despite the dodgy British accent from the narrator which maybe should have been a Geordie/North East accent but whatever.

There’s a outbreak of a new variant of rabies amongst the animal population which seems to progress at warp speed through the stages, particularly when passed onto humans.

Ram (Ramona) a paediatric doctor, is determined to save her friend Nats (Natalie) and her unborn baby in a race against time after Nats is infected.

The seemly short distance to help is paved with obstacles and perils at every turn.

This book felt surprisingly short but not at all rushed. I would recommend for those making journeys and wanting the accompaniment of a good book.

The audio was jumpy and seemed to skip back and forth randomly but didn’t affect my understanding of the story too much.

really well told and gripping story. loved it!
The narrator was really good as well.

I gave this book an overall three stars, I was really looking forward to listening to a Zombie guilty pleasure and eagerly awaited its release. However, the story was a bit wimpy for me, I felt there wasn’t enough detail especially in the “meaty chapters were Nathalie had the baby, okayish for a light hearted listen. Hated the American author trying to replicate an English accent, especially a North East accent.... too cringey.

If you like pregnancy and rabies, this is your book

If you like apocalypse fiction, try a different title. I could barely finish this book

Struggling to finish this one, very slow and full of cliche.

Fixated on the superficial, definitely not my cup of tea.