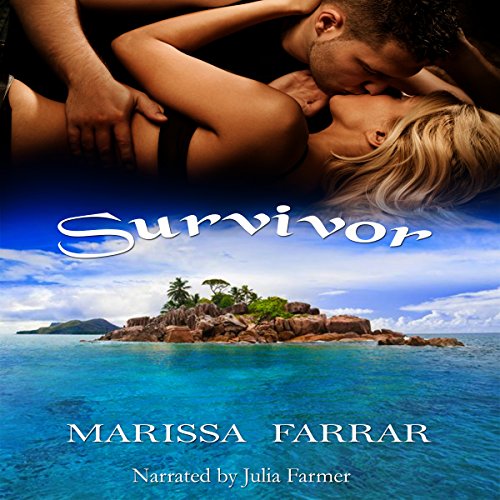 By: Marissa Farrar
Narrated by: Julia Farmer
Try for £0.00

What happens when a spoiled princess and the ultimate alpha male are thrown into a survival situation?

Broke and fallen from grace after her billionaire father is convicted of embezzlement, "it girl" Charlie Charleston has little choice but to accept the offer her agent makes for her to appear on the reality television show Celebrity Survivor.

The thought of being stranded in the middle of nowhere without so much as a scrap of makeup, and all for the general public's entertainment, scares the life out of her. Charlie hasn't even so much as been camping before, never mind existed without any creature comforts and with food she has to catch and kill herself.

Upon being introduced to ex-marine and survival expert Tyler Janson, the man who will be guiding her through all matters to do with surviving in the wild, she wonders if things might have started looking up. The problem is Tyler seems to think she's about as pointless as a pedicure, and nothing she does gets his attention.

But when their plane goes down in the middle of nowhere, Charlie is determined to show Tyler Janson exactly what she's made of.

What listeners say about Survivor

good story with but the sex scenes dont fit.

this would have made a great slow burner romance, and other than the sex scenes that are seemingly thrown in randomly as though maybe the publisher said "more sex" and it ended up being squeezed in wherever it could be, it would have been good. unfortunately the sex scenes where short and not very hot so it kind of failed as a romance as well as erotica.

This started out all roses but then took a tragic turn. I really enjoyed this story and the characters. There is personal growth for each along with the element of danger. Then if they survive how will things change once they get back to civilization.

this book was great but not what i was expecting. i just looked at the name and cover but was very good regrdless

Easy to survive listening to this book

Some of the parts describing their arguments seemed rushed and not thought out .

Have you listened to any of Julia Farmer’s other performances before? How does this one compare?

I have not but she was excellent! Great intonation and style.

Do you think Survivor needs a follow-up book? Why or why not?

Will they be able to really Survive?

This caught my eye because of it's reality show theme. Charlie, the daughter of a rich embezzler, has to recreate her fame after her father goes to jail. Her agent signs her up to go on a Survivor type of show. She is paired up with Tyler, an ex-marine who is to be her shadow and keep her safe during the next five days of her life. Little did they know what they were in for! With the plane about to crash, Tyler takes Charlie and they jump from the plane, landing on a deserted island, where they have to really use those survival skills. Charlie is unsure whether this is really a plot to film her at her worst until her agent's body is washed up on shore. She then realizes how real this is. Tyler is able to teach her some basic skills and between the two, they are able to survive. The attraction between them is sizzling from the start, and only increases as time goes on.

This is my first Marissa Farrar book, and I loved it. Julia Farmer is the narrator and she does a fabulous job. Her voice to me fits Charlie exactly as I would hear her in my head, as the spoiled rich kid. Her performance is enjoyable and makes me want to find others by her.

I rather dug this listen

Kudos to the author and the narrator for making a story, the majority of which takes place on an island, such an enjoyable listen. The characters were well-developed, the story line was a stretch but totally believable, and the ending was very satisfactory. I don't know how they did it, but the author and the narrator were able to put you into this world and make this a very good weekend listen.

Long on passion Short on storyline

If you are wanting a book to kill six hours of mindless time with a few good steamy scenes filled with color this is the book for you. If you like any kind of believable storyline I suggest you pass.