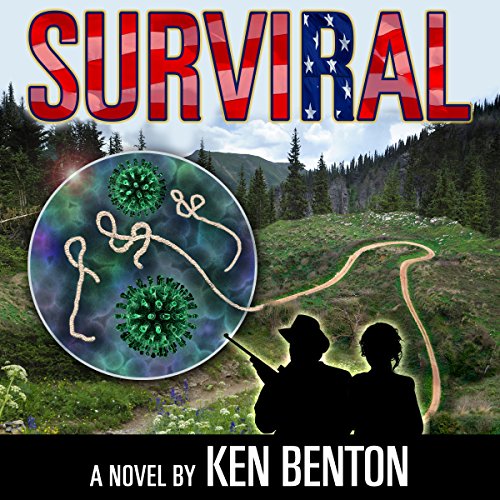 *Audiobook has been updated to fix errors and repetitions*

The deadliest flu season in 100 years is about to turn a whole lot deadlier. When an accident at a famous medical research facility lets a mutated avian flu strain out, a nightmare scenario unfolds. Before authorities can react, millions are infected - and that's just the beginning. The mortality rate exceeds 80%. Leaders and elected officials soon learn the man-manipulated virus respects neither rank nor stature. The resulting chain reaction leads to a collapse of modern society - even in Colorado, where no cases of the killer strain have yet appeared.

Clint Stonebreaker, a happily-married software engineer living in Denver, doesn't like watching the news. He especially doesn't let Jake, his wacky doomsday-prepping brother, watch it when he visits. But when chaos goes viral through the entire country, Clint and his wife Jenny are forced to acknowledge reality. They find themselves hitting the road with their un-enthusiast neighbor to escape the deteriorating city. Their goal? Reaching Clint's hunting cabin in Southeastern Colorado and trying to make a homestead of it.

They don't get far before running into a gauntlet of obstacles. Colorado seems to have become a giant sociological experiment, with dire consequences for making the wrong decisions. The spirit of American resolve is pitted against the ugly realty of criminal opportunism in every direction they turn. Ironically, Clint isn't sure which is worse: being forced to survive in the midst of civil unrest, or knowing he'll have to admit to Jake that he was right. Assuming he can find him....

What listeners say about SurviRal

Worst narration I ever heard......

Terrible narration.......like a 5th grader reading a homework assignment. Riddled with errors, and repeated phrases....didn't anyone proofread this thing. I only finished it as a challenge to my tolerance levels and see how much monotone I could endure........

Liked all the main characters.

Very stilted reading. I got to the end because it was a good story but it was a chore.

A note to the author..Please! If you are going to do any more audio books, get a better narrator!

Skips repeats, monotone reading. Have listened to hundreds of books this one was the worst narration I have heard. At the very very end he tries ... But... Story was ok

Possibly the story is ok but it repeats itself every few paragraphs, at least a sentence or a couple of words.

What was most disappointing about Ken Benton’s story?

Would you be willing to try another one of Roger Lott’s performances?

No, too monotonal... which doesn't help when the editing is so bad.

Where does SurviRal rank among all the audiobooks you’ve listened to so far?

Have you listened to any of Roger Lott’s other performances before? How does this one compare?

please, tell this reader, I enjoyed his reading the script but honestly, I was really put off by his pronunciation of CUP BOARD. Its pronounced cuppboard, one word. Its like he was reading it for the first time and has never heard the word before. Its slightly annoying.
Old mother hubbard went to the cuppoard , etc.. I t think most of you would understand.

The scary thing is how believable and realistic the story is. No unnecessary gore (good). The unfolding of political events is realistic, too. Much suspense later in the story.

Good story, narration not so much

Where does SurviRal rank among all the audiobooks you’ve listened to so far?

Near the top in terms of story and the bottom in narration.

The good news it that BUCK OUT, the other book by this author has a different reader who is much better. Too bad about the narrator choice in this one.

I could not finish the story. The reader was so bad,. no tone changes. no inflection. awful. Hard to know when there was a character change