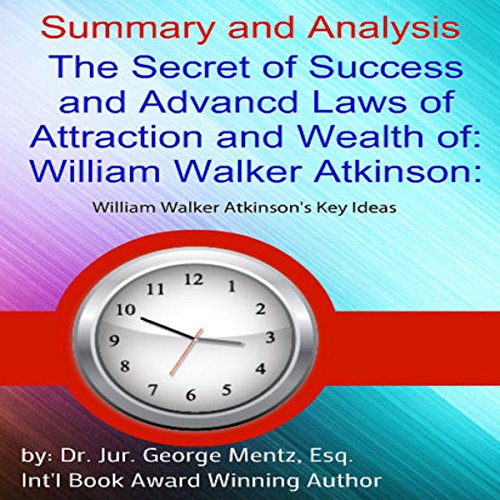 Summary and Analysis: The Secret of Success and Advanced Laws of Attraction and Wealth of William Walker Atkinson

By: George Mentz
Narrated by: Joseph Nuckols
Try for £0.00

Here is a short and to the point summary of key ideas from Dr. Atkinson. This is a VIP overview on Atkinson's views of human potential and prosperity and wealth. Atkinson wrote a multitude of books on New Thought by various names. He wrote nearly a hundred books with many other pseudonyms: Theodore Sheldon, Theron Q. Dumont, Swami Panchadasi, The Three Initiates, Magus Incognito. Originally from Maryland, he married and later became interested in Mental Science and Hinduism. He was admitted to practice as a lawyer in Pennsylvania and Illinois. Around 1916, he began writing articles for Elizabeth Towne's magazine The Nautilus, and from 1916 to 1919 Atkinson edited the journal Advanced Thought, and for a time he was honorary president of the International New Thought Alliance. He is believed to have written the famous book The Kybalion: Hermetic Philosophy also. Atkins is believed to have inspired the movie The Secret and also other famous New Thought writers, such as Rhonda Byrne, Joe Vitale, and many others.

What listeners say about Summary and Analysis: The Secret of Success and Advanced Laws of Attraction and Wealth of William Walker Atkinson

Great recap of the key essential points that anyone requires for success in life, well worth paying the small fee.