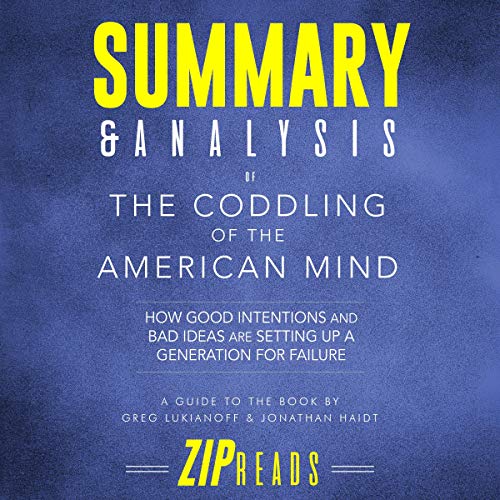 Summary & Analysis of The Coddling of the American Mind: How Good Intentions and Bad Ideas Are Setting Up a Generation for Failure | A Guide to the Book by Greg Lukianoff and Jonathan Haidt

By: ZIP Reads
Narrated by: Satauna Howery
Try for £0.00

In their best-selling book, The Coddling of the American Mind, Greg Lukianoff and Jonathan Haidt explore the culture of fragility and safetyism that has invaded American universities since 2013 and the underlying causes behind it.

What does this ZIP Reads Summary include?

About the original book: In The Coddling of the American Mind, Lukianoff and Haidt explore in detail the rise in the disinivtation of guest speakers at college campuses, the outbreak of violent protests, and the heightened sensitivity of students in a culture of "safetyism" that has spread nationwide. They present three great untruths that have led to this phenomenon, delve into the causes behind them, and provide actionable advice for the future. Whether you're a student, a parent, or a citizen concerned for the political divisiveness taking over the country,

The Coddling of the American Mind provides real answers to the issues facing the nation today.

DISCLAIMER: This book is intended as a companion to, not a replacement for, The Coddling of the American Mind. ZIP Reads is wholly responsible for this content and is not associated with the original author in any way.

What listeners say about Summary & Analysis of The Coddling of the American Mind: How Good Intentions and Bad Ideas Are Setting Up a Generation for Failure | A Guide to the Book by Greg Lukianoff and Jonathan Haidt

The relevant points, with overshadows of possible bias

Ok, it hopefully conveys the pertinent facts/points/ideas of the book. It is also quite apparent that the editors/reviewers (and author being reviewed) are biased. Understanding that, I felt that the book reviewed was insightful and made some good points. Since the editors/reviewers were so opinionated and biased, it makes me want to read the book. Why? Was this just the facts from the book with accurate analysis or were they tainted? Ok, no, I won’t read the book reviewed. I will just stick with this review. I was able to gain the insights of the book they reviewed and I WILL read their reviews of other books.