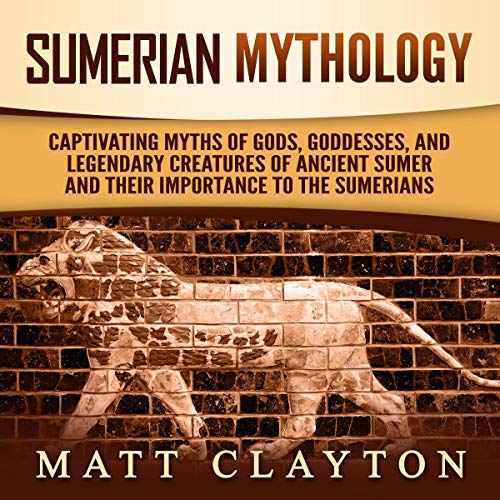 Captivating Myths of Gods, Goddesses, and Legendary Creatures of Ancient Sumer and Their Importance to the Sumerians
By: Matt Clayton
Narrated by: Mike Reaves
Length: 3 hrs and 5 mins
Categories: History, Ancient
5 out of 5 stars 4.8 (25 ratings)

If you're looking for a captivating collection of Sumerian myths, then pay attention!

This audiobook includes tales of gods and goddesses, both major and minor, as well as kings and heroes, both historical and mythical. One such king is the hero of what many scholars believe to be the first written epic: Gilgamesh.

In addition to creating connections between the human world and the divine, Sumerian myths explain how the world came to be in the first place. These myths establish the cosmic order, which places the greater gods, or Annunaki, at the top of the hierarchy, with the lesser gods, or Igigi, below them.

Heroic strength capable of bringing mountains to their knees is the province of both male and female deities in Sumerian myth. The god Ninurta does battle with the evil Asag and rearranges the mountains to allow the Tigris and Euphrates to flow while the goddess Inanna brings down Mount Ebih in revenge for the mountain’s refusal to do the goddess reverence.

In Sumerian Mythology: Captivating Myths of Gods, Goddesses, and Legendary Creatures of Ancient Sumer and Their Importance to the Sumerians, you'll find the following Sumerian myths and topics covered:

So, if you want a captivating collection of Sumerian myths, click the “buy now” button!

This wasn't the easiest book I have read but then you wouldn't expect it to be, for such a dry subject, but it was very interesting to see the comparisons between religious paths and how they have, or may have, incorporated these stories into their own and to extrapolate how these stories have come down into many other cultures not mentioned but be able to see the themes as they may have transformed even up to the present day.

Wonderful stories from a charming culture. Captivating history does a great job of creating this interesting audiobook.

Excellent information! It's not as dry as I thought it would be and I enjoyed it. Very well researched and thorough. I'd recommend this book to anyone that would like to read about Mesopotamian Myths and Legends, and it would be a great reference if you're writing a paper, as sources are well documented.

I am not a Mesopotamian scholar, but I like this book. If you are a fan of Gilgamesh, I would say this is a must. It contains pretty useful information. I will be adding much more to my teaching of Gilgamesh now that I have listened to this book.

This audiobook is very interesting, it gives the source itself as content. Awesome information and well managed.

Great book for Ancient Mythology: East and West. I totally agreed with this author and the research.

If you are interested in where the biblical creation and flood myths come from this is a must-have book.

This book might not include everything, or be the newest and best, but if you are looking to purchase just one book on the Sumerians/Akkadians/Ancient Babylon, it has to be this one. The job is well done by the author.

Ancient myths are one of my favorite topics, and this text satisfied my joy of the topic.

I have been looking for a book like this for a few years, and now I happened upon this one. This has a lot of the myths and stories that I was wanting to read. I highly recommend those who are interested in the subject.

If you are curious as to the myths that spawned a number of the books of the Old Testament, here is the book that explains a lot of the disconnects that you may have thought about.

A beautiful and important book about the Sumerian myths !!! I highly recommend this book to all.

A must for anyone interested in Biblical origins, and the general mythological climate of the Ancient Near East. Nicely laid out, artistic look and feel, so one sees the poetic nature of the myths. Excellent resource.

As an enthusiast of Sumerian mythology, this book has a great translation from the source cuneiform tablets. Very well written.

A scholarly translation of the Creation myth, and other Mesopotamian stories. Solid material, a must-have.

This book serves as an excellent resource for introducing yourself to ancient texts that may very well have influenced Biblical writers in the communication of their God-given inspirations. A must-read for anyone who desiring a clearer understanding of Bible origins.

This is a fascinating look at all of the myths from Sumer and Babylon that have been found and translated. If you are curious about ancient myths this is a great book.

The Sumerians produced the first civilization, and we still use tools, mathematics, etc., created by them. Their impact directly affected Mesopotamia even as they were defeated by others.

This audiobook is very easy to understand and very accessible, very well researched and full of interesting facts. Thanks, Captivating History.

I loved this little book. As a fan of history and ancient civilizations, I found this to be a great introduction to Sumerian civilization. It is also a good resourceful reference.