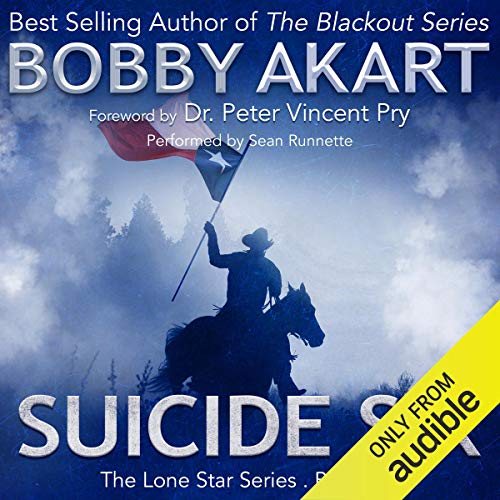 We'll live to fight another day!

With those words, a hero rose to the challenge and a family found the strength within themselves to face the unthinkable. The forces of evil have descended upon Armstrong Ranch. The family had worked this ranch since the 1800s and now invaders from a faraway land had plans to take it away. Will the Armstrongs persevere in the face of a well-trained, deadly enemy which intends to steal their home and end their lives?

The Lone Star Series is a thought-provoking, gut-wrenching look into a post-apocalyptic world devastated by nuclear destruction. Will you be ready to make the tough decisions to protect your family and survive?

Note: The Lone Star Series does not contain strong language. It is intended to entertain and inform audiences of all ages, including teen and young adults. Although some scenes depict the realistic threat our nation faces from a nuclear war and the societal collapse which will result in the aftermath, it does not contain graphic scenes typical of other books in the post-apocalyptic genre. I believe more of our young people need to lead a preparedness lifestyle. Studies show that our millennials do not have any of the basic survival skills. By writing this series free of vulgarities and gratuitous sexual innuendo, I've intended it to be suitable for everyone.

I finished this book in 24 hours. An amazing and satisfying end to a fantastic series. as a prepper in training training I learnt so much whilst enjoying this story.

Not the best ending abit of a let down but nice.
While set of books good for clean living people no real blood and guts and gosh is a swear word but I expected noting more.

What a great way to end the series, and what a series it's been! Akart made me feel things that I don't normally feel while reading normal books - let alone post-apocalyptic ones.  Suicide Six is about as perfect of an ending you can write for a series and I'm glad that Akart picked the ending he did. Over the course of this series, we lost some people - and Akart lets you know that he nor his characters will forget these people.

The name itself made me smile when I realized he named it after a plotline in the book.  I was driving to work and I got this big smile on my face ("oh, that's why he called it Suicide Six!").  He was able to sneak it in there without making it seem overdone or make you react like when a character says the movie title in the middle of a movie.

It's crazy to think back on the first part of this book and realize that all happened during the same story.  Akart splits the book in two and gives you not one, but two battles you won't soon forget.  And then the end he gives you yet another one if you didn't have enough action in the opening.  The final battle and then scenes after (I'm trying so hard not to give anything away) really hit me in the soft spot.  Akart was able to get that gut reaction out of me that most authors strive for.

Overall, Suicide Six might be my favorite book in the series (it's probably tied with the first book, Axis of Evil). The writing is just perfect, it's not in your face with polarizing politics, and has so many heartwarming moments that will be remembered long after the battle scenes are forgotten.  Suicide Six and the entire Lone Star Series will hold a special place in my heart. I requested a copy of this audiobook - it has not affected my review in any way.

Incredible series, love how are time with the Armstrong Family came to a close... The range of emotionalism of the charters, family and US comment and allegiance made this series a can’t put down. Looking forward to our next adventures with Author Bobby Akart!

Great Conclusion to the Series

In a series of epic cliffhangers, Suicide Six gives the reader a most subtle cliffhanger of hope through perseverance. The Armstrong family and Texans will be just fine.

The entirety of the series could have been condensed into fewer books. By the time the story gets to this book the genre digresses from post-apocalyptic to science fiction/fantasy.

I thoroughly enjoyed the Lone Star series and hope Mr. Akart continues the story. The characters are well developed and the plot was suspenseful and very relevant. This is a must read!

If you like long wedding ceremonies and wedding preparation this book is for you. Not what I expected.

I hate paying $90 for six books, however it really was a good series. Bobby Akart does an exceptional job of putting together a story!

In this series Bobby Akart Has really outdone himself. Producing a book a month is a monumental task. The hardest part is to make it all work together, To make it seamless Excellent book excellent series

This is a great series, and makes a heck of. Lot of sense. Rather scary in fact. As a Native Texan, it was even that much easier to identify with the story line as well.

This series is one of my favorites. The work Bobby put into this and all his books is outstanding. Can’t wait to see what he has in store us in the next series.