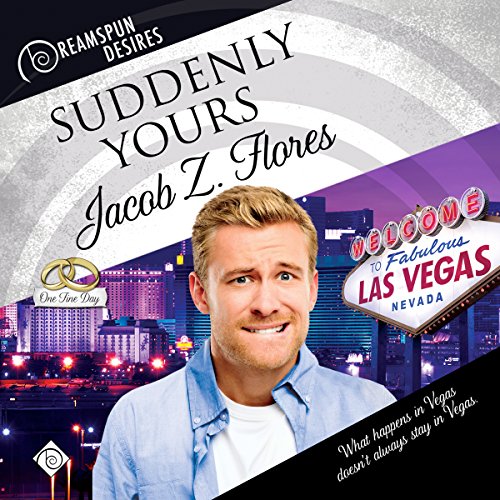 What happens in Vegas doesn't always stay in Vegas.

Cody Hayes is having one epic morning after. The hangover following a Vegas bachelor party is nothing new to him, and neither is the naked man in his bed.

His apparent marriage is a different story.

Carefully plotting every detail of his life carried Julian Canales to a Senate seat as an openly gay man. A drunken night of Truth or Dare isn't like him...and neither is marrying a man he just met. He'd get an annulment, but the media has gotten wind of his hasty nuptials. If Julian's political career is going to survive, he has to stay married to a man who's his opposite in every way.

Now he must convince Cody that all they need to do is survive a conservative political rival, a heartbroken ex, their painful pasts...and an attraction neither man can fight.

What fun this was! Jacob Flores knows how to give us fun characters and even in this situation, a believable and compelling romance.

What I loved about this story was the explanation behind the two staying married felt really “real” to me. Sure, the marriage started as a Very Bad Idea, but when examined in the light of day, it was actually plausible. It made swallowing the whole thing more palatable.

The Dreamspun Desires line is a “light steam” when it comes to sensual times, so I think that influenced how the intimacy was handled between the two MCs. If I could change anything, I’d have changed that. It was the only thing that felt a little forced. To me, I couldn’t see these two denying themselves for any fake time table when their chemistry was so clearly OTT.

I loved Julian’s optimism and Cody’s realism. The two really balanced the other out, and kept them working on their relationship when others would have bailed.

The dialog/banter between the two was fun, and the relative angst felt appropriate and not too much.

I really enjoyed this and think it’s one of the best in this series so far!

John Solo is a good, solid narrator. He does a little bit with the Hispanic accents but they aren’t quite “good”. But it’s a nice attempt. Cody is a hillbilly in terms of accents, but it mostly works. In general, this is a nice way to enjoy this story, though it doesn’t do much to add to the overall experience, it doesn’t detract either.

I enjoyed this book. I think waking up in Vegas stories have been around as long as it's been possible to do that...and I kind of love the trope. What makes this one interesting is that Julian is a congressman and that means that his quickie, drunken marriage has some serious repercussions especially since he's in the middle of a reelection campaign.

And the reason these two decided to get married in the first place is that neither of them believes in love...they are the perfect match...until they aren't...because Cody isn't as jaded or worldly as Julian is. It's not so easy for Cody to just shut down his emotions the way Julian can.

The book was good. I liked the romance and with both of their backstories, I could buy the beliefs that both Cody and Julian have that are holding them back.

Overall this was fun. This was my first read from the Dreamspun Desires line, but I don't think it will be my last. And at 6 hours audio (faster because I listen to them at 1.5 speed, this is an easy audio to pick up and devour during a day cleaning the house).