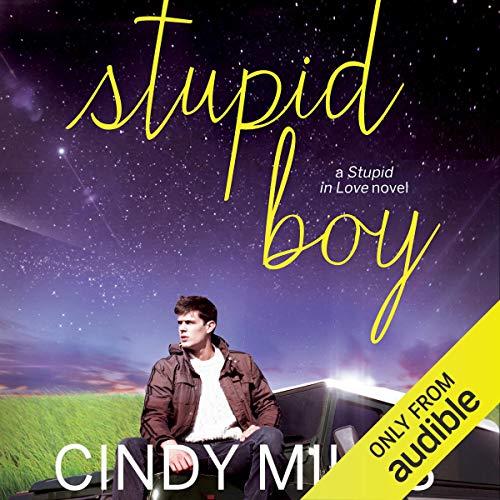 By: Cindy Miles
Narrated by: Elizabeth Evans,Vikas Adam
Try for £0.00

From Cindy Miles, best-selling new adult author of Stupid Girl, comes the next installment of her blockbuster Stupid in Love series - Stupid Boy.

Brax Jenkins and Olivia Beaumont are the most envied couple at Winston University - but the so-called "virginity dare", orchestrated by Brax's old fraternity, almost tore them apart. Now, a new dare is taking shape, and it's sure to set emotions ablaze - more than ever before.

Winston's "It Girl" Harper Belle isn't just president of the Deltas - she's also a master at keeping her ugly past a secret. So, when the Kappas' dare hits closer to home for her more than anyone realizes, she devises a competition of her own as payback. Three sorority sisters will seek out a notorious womanizer on campus and - unbeknownst their "mark" - secretly train him to be the perfect boyfriend. Always up for a challenge, Harper targets the biggest player she can find: Brax's wickedly handsome foster brother Kane McCarthy.

But, Harper discovers there's much more to Kane than girls, games, and partying. His easy smile belies the quiet, old soul reflected in his deep brown eyes. All it takes is one night, one secret laid bare, and one kiss from Kane to shift Harper's world on its axis. Suddenly, the girl who's always walked a straight and narrow path can't think of anything else except losing control.

"Stupid Boy by Cindy Miles is everything I love about a new adult romance - angsty, emotional, and sexy. I couldn't stop reading!" (NYT and USA Today best-selling author Lauren Hawkeye)

What listeners say about Stupid Boy

So I listened to this book. I loved the narrators voices especially when she would through in Brax's Boston accent. This book was great, pulled me in. I loved Olivia and how strong she is and how she put her family before anything else.

What a wonderful book!

This was such a good book. I liked the first one but this was SOOOO much better.. I am now really looking forward to the next in the series!!

At first I wasn't really sure about this book and I didn't know if it would be as good as the first one (which was so good) but i got so hooked and now it's probably my favorite book out of any right now!! Strongly recommend, I just finished and want to listen all over again!!

Again I wish we got more of Kane's POV and I do feel it ends a bit abruptly with loos ends that weren't finished IMHO but overall the narrators did a good job and it was a fairly quick and easy listen.

these stories are wonderful. makes you look at life and be thankful. these two have been through so much and find each other. totally a good read

I ended up stumbling on this book because I really like Vikas Adam as a narrator!
However, I ended up getting drawn into the story and the characters too. It has more depth than your typical “romance” novel (and more childhood trauma).
It was a nice story of two people who had a rough start learning to trust each other. I’m glad I decided to listen to it!

Let me start by saying that the narrator did a really god job!
The book in itself was just meh...
I liked Harper, Kane was just an ok character. Their pasts were interesting and made me really feel sorry for them, unfortunattely their romance was not as good as i wanted.

this is a love story about two unlikely people who meet, and somehow are able to heal the other just by being

great book , I love it. not as good as book on stupid girl. but I still loved it. looking forward to more in this series. I would recommend it to anyone.

only rated 3 stars for performance for male narrator. Female narrator does an amazing job with accents , inflecion, switching between different accents quickly, and acting out the parts. Really good