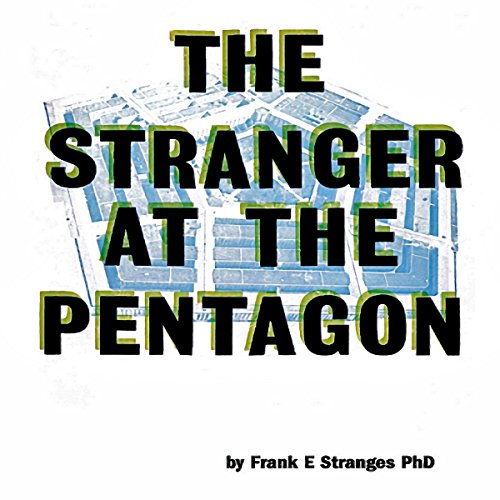 Stranger at the Pentagon

These are the true facts behind the US government's silence on UFO landings, contacts, and its collaboration with an extraterrestrial individual.

Dr. Frank Stranges was born and educated in Brooklyn, New York. He received his Bachelors of Divinity, as well as PhD's in Psychology and Philosophy, from Faith Theological Seminary in Ft. Lauderdale, Florida. Dr. Stranges was a member of the Mayor's Advisory Council of Los Angeles, and a member of the American Association for Social Psychology. He also held a PhD from the National Institute of Criminology, in Washington, D.C., and was an accredited Diplomat of the American Academy of Professional Arts.

Dr. Stranges authored several books on scientific and religious subjects, including his classic The Stranger at the Pentagon, which tells the unusual story of a spaceman named Valiant Thor. Because Thor was a real person, who appeared in public on a few occasions (including at the United Nations headquarters in New York City), the legend of the stranger at the Pentagon has grown, becoming a real head-scratcher for 21st-century UFO researchers. Today, it is still one of the hottest topics in ufology, having spawned various other books, documentaries, and even feature Hollywood films.

What exactly happened to Valiant Thor? Did he get back on his spaceship and return to his home planet, or did he help the US government set up alien-human hybrid experimentation in remote underground bases? Or was he imprisoned - thrown in the clink - by those in the government who have been fighting UFO disclosure all these years?

Since no one knows how long an alien can live, could Valiant Thor still be alive today, in 2016, somewhere in - or under - our nation's capital?

This special reissue - an exact copy of the original book - features an actual introduction by Valiant Thor himself. A must-have for the serious paranormal researcher.

What listeners say about Stranger at the Pentagon

old and irrelevant! was expecting more but really disappointed. comes off as a very badly written scfi story with no imagination.

I really enjoy this book a bit slow at first, but get better so try it.

WASTE OF A BOOK CREDIT

I believe in Aliens and UFOs and have since I was a little girl. For 30 years I lived in Las Vegas, very close to Area 51 and made several trips there to show visitors all about it. I love the show "Ancient Aliens" and they talked a lot about this book so I was very excited to find it on Audible. It is only two CDs so I thought it would be a quick, fun listen. There was about 20 minutes of very interesting information on the first disc and about 10 minutes on the second disc. The rest of the disc space is dedicated to what seems to be commercials for all the things the author had done and also mini biographies of every one who has ever written or published anything about the subject. I was very disappointed and wanted to let others know before they waste a book credit like I did.

Id not waste your time. book was bad, really bad. its more about the bible and followings than what its advertised as. most likely written by a southern baptist democrat

They're saying that the planet Venus has an atmosphere like earth's. This is totally preposterous. We know it has an incompatible atmosphere for life forms like us. It would crush you if you stood on the surface. So that's what made me feel the story is total fiction. Interesting but, it's not a true story. So that being said, the story itself isn't very good.

The story with Valiant has raised some questions in my mind and would like to know more… sadly the rest just seem too much fluff. I am sure it is important to someone but I am not concerned with everyone’s credentials Mr. strange has come across. Still worth the $6

don't bother, written in 1967 and narrated as if it was today and promoting a movie. waste of time.

Good beginning but looses after that

The beginning was very good but the rest was just reading bio's of people. It got kinda boring during that. kept waiting for more story never came.

I was really enjoying it... Until early on in the second part (chapter?) with well over an hour and twenty minutes left to go and it shuts off completely. The time code says "NaN:00:NaN" ..... What the hell is that? Good way to ruin a good audio book! I restarted it a few times and it does the exact same thing at the exact same spot every single time, and leaves me no way to skip ahead. It's just stuck. So I guess I'll have to go buy the brick and motor version of the book and enjoy the rest of the story way. My review is in no way a reflection on this incredible and very interesting story - that's great and I love it. It's the audible execution of it that is terrible.

Thank you Audible for making sure that my first experience with your company will be my last. And I'm sure you won't even post my review due to your "please note" at the bottom of this page. Nice to know you also skew your reviews. Awesome! I'll screen shot mine and share it with everyone anyway.

Overall I would say it wasn't a bad book. I found the first few chapters very interesting and made me pay close attention. later on in the book, it sounded like it was just sighting sources like a research paper and then it ended. I would have liked to hear more about the visitor from Venus and maybe a follow up to now.

Stranger at Pentagon or movie promo?

started off well talking about the stranger at the Pentagon. Then moved into backgrounds for the people involved and then into the promo