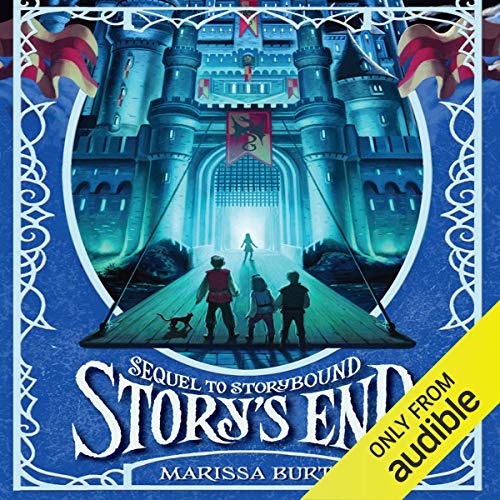 Long ago, a King ruled the land of Story.

During his reign, heroes, villains, and characters of all kinds lived out new tales filled with daring quests and epic struggles.

Then the King disappeared, and over the years, nearly everyone forgot that he had ever existed. Now an evil enemy has emerged, determined to write a new future for Story that he will control. And an ordinary girl named Una Fairchild is inextricably tangled up in his deadly plan.

Una and her friends Peter and Indy are desperate to find a way to defeat the enemy. But Una soon discovers that the real key may lie in her own mysterious ties to Story's past - and to the long-forgotten King, who could be Story's only hope for survival.

What listeners say about Story's End

Clever idea but not enough

This could have been fabulous except that it lacked depth It was simply boring. I did finish it but it was not worth the 15 hours of total listening time. Finally it did not resolve who all the characters were and how they fit together. I have absolutely no desire to find out anything more about any of them. This was too complicated to be a children's story and not meaningful enough to be an adult one.

I really enjoyed the plot of good against evil, and the thought that we can all write our own stories.

If you read the first half of this story in Storybound, then you're already sold. All I will say is: I LOVE HOW THIS TALE WRAPS UP!

If you could sum up Story's End in three words, what would they be?

What other book might you compare Story's End to and why?

Pennroyal Academy because it goes farther then most of the fairy tale remakes out there. Both series have their own very unique spin on retelling the stories in an adventurous way that grabs the reader.

Which character – as performed by Elizabeth Evans – was your favorite?

Una and Peter were on the top of my favorites list.

This book did make me laugh and at other moments hold my breath as I waited to see some of the big scenes unfold.

After. I listened and found there was nothing bad that I wouldn't let my younger children listen to, then I had them listen and they loved both books too (ages 6-11).

Awesome book for people who want a adventure.

I would recommend this book to everyone I know.

Not terrible, but there are others I like more

The story is a bit garbled and new characters seem to pop out of nowhere.

good, but only for older kids

It was fun and very entertaining and I love reading it over and over again and it also was funny and weird.

I haven't adequate time to expound properly on this book. The first was better for younger audiences but leaves you having to read this one. The somewhat zombie-esque taleless took this book into (in my personal opinion) a tween or older book... when it had such promise from book one of being something I'd share with my daughter sooner rather than later. But now... Later it is. Don't misunderstand though. I loved this book. It brought tears to my eyes at just the right moments, and was adventure through and through. Well done Mrs. Burt.