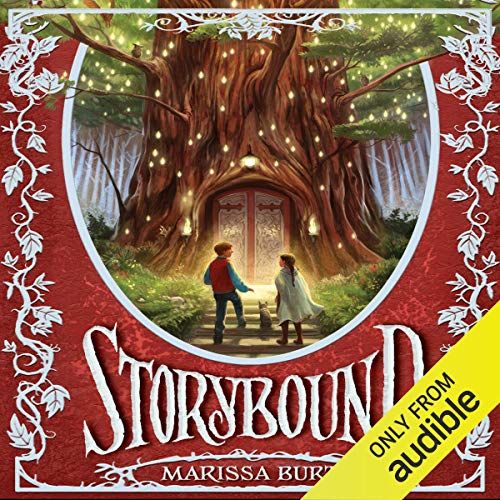 When Una Fairchild stumbles upon a mysterious book buried deep in the basement of her school library, she thinks nothing of opening the cover and diving in. But instead of paging through a regular novel, Una suddenly finds herself Written In to the land of Story - a world filled with Heroes and Villains and fairy-tale characters.

But not everything in Story is as magical as it seems. Una must figure out why she has been Written In - and fast - before anyone else discovers her secret. Together with her new friend Peter and a talking cat named Sam, Una digs deep into Story's shadowy past. She quickly realizes that she is tied to the world in ways she never could have imagined - and it might be up to her to save it.

Loved it. Best fantasy book, I have ever read. The start is a little harsh to get into, but after chapter three, I was begging for more. The audio was fantastic. The narrator read the story, exactly how, I would have imagined it. The story, was so great, I have dedicated myself, to read, the second book.

I like it, smooth pace of revealing action
enjoyable, the narrator is very good as well you can feel the characters

Okay story about wandering into a fairy tale

This is a story about a young girl who gets Written In (WI) to the Land of Story. There she has to figure out why she's a WI and who wrote her in.

This is really just the first half of the story. Nothing is resolved and the book ends right in the middle of the story.

I thought our heroine was extremely abrasive and obnoxious. I also thought the initial description of her as a quiet loner did not at all fit how she acted in Story. There were a few contradictions like that throughout the story.

I also just got kind of bored with it all about halfway through. In the end, even though it ends mid-story, I really wasn't all that curious about what will happen to these characters. As a result, I probably won't read Story's End which ties up this duology.

SO FUN. An ideal MG Fantasy. &amp; Part 2 even better!

Would you consider the audio edition of Storybound to be better than the print version?

I absolutely love this story. Fully. It is sweet and charming and playful throughout but with those important elements of intensity and drama as well. The idea is entertaining, and the execution is winsome.Some reviewers have complained that it is light on character development or is somewhat derivative (i.e., &quot;It reminded me of Harry Potter,&quot; etc.). To these people I would say, (A) it's a *middle grade* novel and (B) it is deeply embedded in the fantasy genre. In other words, if you want a middle grade fantasy, then this fully delivers exactly what it should. If you were hoping for Moby Dick, this isn't it.Also, it's worth noting that the second half of this story (Story's End) is AWESOME! I felt the conclusion (and the journey toward it) to be deeply satisfying!

Generally a fun read but not very compelling and also unoriginal. Describing this book as "The Never-ending Story meets Harry Potter" would not be inaccurate. A girl gets pulled into a book where she finds a school for fictional characters. The story is complete with a lost fabled enemy and even a lost king who must return. It also has a cliffhanger ending so if you don't want to get sucked into a series don't even read this. I will be abandoning the series at this first book.

Not just another fairytale story. Loved the creativity.

This was a great story but he warned you'll need the second book to finish it. It had me hooked, it was fun and I felt it was a completely new spin a retelling some of the old stories/fairy tales that we know. I would highly recommend this book and Story's End.

Wow!! What a way to start a two book series. Adventure, Mystery, an incredible Heroine, everything you could hope to have in an amazing fantasy series. Looking forward to the next book.

I love this book soo much📙 😍.filled with twists.

Such a fun book

I really enjoyed this book. I love the narrator which was the first draw to this book and the story second. I was drawn into the story within the first few chapters and I liked it. It's exciting, fun and full of twists. I will admit that there were some things that I was confused about involving the plot and think it should have been a little longer to better explain it but I think it will be better in book two. Overall I liked it and recommend it for fairy tale lovers

...and I love how she was "written in" and the fairytales are looked upon in a whole new light!
I wasn't crazy about the reader, I think her voice is just too high for my liking,,and I like it when folks use different voices for characters. But that's just me. Overall cute story!