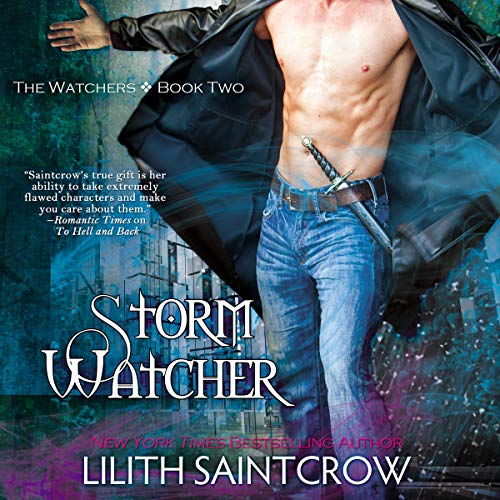 All Mariamne Niege wants is to finish her thesis and get a job. Unfortunately, she's a Guardian now, and her visions of the future have grown so intense, she's blind to the world while in their grip. Her Watcher, Hanson, is sleeping on her couch and scaring her roommates when he's not shepherding her through the visions and calming her worsening nightmares. Then the earthquakes start, warning of an even bigger disaster - a cataclysm that could level her beloved city and claim countless innocent lives. A disaster her visions say are triggered by Hanson, even though he's sworn to protect her....

Hanson joined the Watchers to atone for a life of lies, but the only way he can stay close enough to Mari to protect her is to use some of his less-than-honest talents. She is the only witch who can ease the agony of being a Watcher and the only woman in the world he wants. Then Mari's house is broken into and her roommates slaughtered, and in order to save his witch, Hanson is going to have to become more vicious than the Dark - even though it might mean losing her forever.

Bounced around the world as a military brat, Lilith Saintcrow fell in love with writing in second grade and never looked back. She currently resides in Vancouver, Washington, with two children, a menagerie, and books.

What listeners say about Storm Watcher

This is an emotional listen full of drama, action, adventure and romance. I haven't listened to book one but found I had no problem following this one. Although I feel if I had heard or read book one then this one would have been a bit better. The narration was done well. Both narrators, Rayna Cole and Jack Wayne, gave each character their own voice and emotions. They did help to bring the story to life and made the listen more enjoyable. Overall, a decent enough listen but I would recommend listening to book one before hearing this one but it's not necessary.

Dually narrated by Rayna Cole and Jack Wayne (this works surprisingly well!), there is a lot of action in this second tale of the saga. If you haven't read the first, you will not have the background explaining how the city status was modified and the coven's role changed (note how I'm avoiding spoilers here!), but will be able to enjoy a solid paranormal adventure with a great deal of violence. I suspect this plot format would be terrific for a role-playing game.

I loved this book! I loved the series! I loved the audiobook! The narrators were wonderful! I don’t think anyone could of done a better job. I hope the rest of the series will be in audiobook soon as well!

I thought this was a good follow up to the first book. Similarly, I enjoyed the narration between Jack Wayne and Rayna Cole. There has only been a handful of books with multiple narrators that I actually enjoyed. The transitions between them are often jarring. They did a great job of transitioning between them. As with the first book, there is definitely a heavy romance element to the story but it is balanced with a decent amount of paranormal content and action. All in all, this was very enjoyable book and I will look to continue this series.

I was voluntarily provided this free review copy audiobook by the author, narrator, or publisher and found it very entertaining. The second book in this series is as good as the first as we follow the tale of the Guardians and their Watchers. The spell that turned the Witches into Guardians must be completed, but the Dark doesn't want that happening. Again the two narrators enhances the experience, combined the fast paced plot and great characters, makes this is a great listen. Looking forward to book three.

A little slow in the beginning but it picks up late

I was given this book in exchange for a honest review.
The beginning of the book are mostly about the drama of emotions between the characters and it made it hard to really get into the book. Since that writing style really isn’t my cup of tea, I would probably not have finished it, if I hadn’t made the commitment.
It did pick up about half way through and became more interesting.
I think this is a book for people who likes emotional dramas, combined with romance and a bit of action.
The narrators did a good job at bringing life to the story.

Still troubles to work through, and bring to love.

Rayna and Jack voice the chapters based on POV - Jack for Hanson and Rayna for Mari. This is a lovely combo as we get to hear how they hear things said and how each feels on the receiving end. Things are always perceived differently by each person, and we see that here with their relationship as it grows. They both add feeling and tone differences for the characters we come across in the story to help differentiate them as we listen.

Mari is such a kind soul that there are people who tell her what to do and take advantage of her kindness to help. Mari starts to get bolder and braver through this book. She starts to stand up for herself.

Mari finds someone special in Hanson as they grow closer. She's afraid to show her feelings, and he's not wanting to show his because as a Watcher he has no right to touch or feel for her. Though, Mari is still a kind soul and can't help wanting to help people, no matter how bad because it's her nature as a Lightbringer and now the city's Guardian. Hanson wants to protect and help her with these people.

Hanson has his insecurities as well. He's lost a witch in the past and couldn't bear to lose Mari. He's afraid he'll lose her by making a mistake or not paying close attention. But his worse fear, that he scares Mari and he'll lose her because of that.

Mari has visions, and one particular vision has her off hinged. She's certain the vision will come true and she can't take the thought of it as she would lose a dear friend if it does. This nightmare haunts her at night and with lack of sleep or with broken sleep, she's not at her best during the day. She finds some peace but also is given another avenue to search and learn about things when a strange man gives her papers with notes from her teacher on it. The teacher who's gone and missed.

This is a romance read mixed with action and worry. We learn there is still trouble in the city that needs tending to yet Mari and Hanson are drawn to each other as they work through all the troubles. There are sensual moments along with a growth of trust and feelings between them. I love the blend of action and love in this story. This is an adult read with these special moments.

they finally hook up , thank the gods . sexual tension , magic , an combat