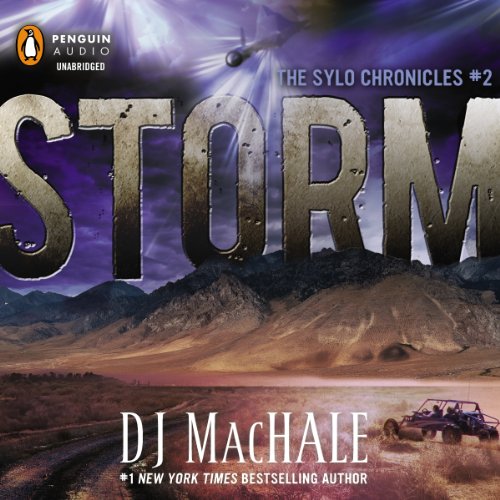 After a harrowing escape from the SYLO occupied Pemberwick Island, Tucker Pierce and his surviving friends have finally reached the mainland, only to find that no one is left. The once bustling seaport city is deserted.

From the bowels of a Portland hospital where they encounter their first fellow survivor to the abandoned stores they must raid for supplies, Tucker, Tori, and company set off on a quest for answers and, for Tucker, vengeance. But as one highway gives way to the next - and one death-defying escape precedes another - Tucker soon realizes that “trust no one” doesn’t just mean the U.S. military.

"If you're a fan of The Maze Runner and Alex Rider, you might want to pick up SYLO... A fast-paced read and a huge cliffhanger." (EW.com)

What listeners say about Storm

Great story line as we've come to expect from MacHale. The narrator however has few distinguishable male voices and maybe 2 female ones. All in all I enjoyed it greatly.

its was good book. thank you for such a great book

Storm contained a lot of what, I felt, SYLO lacked; that the would be fast-paced with lots of action. In retrospect, I realize that wasn't what was needed. There was a need for the slow build. Otherwise, you wouldn't really understand what Tucker lost -- his home, his friends, his identity, his world. I guess, as of fan of his other (and dare I say most excellent ) series, Pendragon, I was expecting action from the get-go. Which is what Storm delivered. So, I humbly take back a lot of the criticisms I gave SYLO and especially Tucker.

In SYLO, felt that Tucker had a reliable narrator, yes, but not a strong enough character to carry the story and step into the leadership role with his friends. Somewhere in the midst of it all, I forgot he was 1) only fourteen and 2) extremely traumatized. Sees a literal UFO in the sky, idyllic island home invaded by the military and turned into an internment camp, his best friend is killed, his parents turn against him, he's left with "friends" he doesn't really know, surrounded by a bunch of people he can't trust and two branches of the United State Military are duking it out against each other. That's a lot of plot, so sorry McHale, I was wrong.

In Storm, you see this gradual shift of Tucker going from puberty into adulthood. Doesn't matter anymore that he's 14 years of age; he's faced too much to be in his youth. In the beginning of the book, some of the things he does are still childish, but by the end of the book his actions are calculated and purposeful.

When it comes to his companions, I love how each of them doesn't necessarily do anything blatantly suspicious, but all of them could be a Retro infiltrator. I have to admit, I was suspicious of Olivia from the start. She just kept popping up at the right time and her personally shifted. Was she in the end, the bravest of them all as Tucker said or was she playing them from the start? Kent is just an idiotic, egotistical jerk -- or, is he a good actor? He was with Olivia from the beginning and his parents supply of the Ruby was. Even Tori's actions are questionable. With all her anger fueling her, were those little peaks of vulnerability. These characters are well crafted and keep me guessing.

I'm not going to dive deep into the plot, but at the end of this book which leads up to the trilogy's conclusion, I''m asking all the right questions. Who are the Retros and what is there agenda? What is SYLO really? What did Fithe mean he was like them? Those are questions I am really going to enjoy getting answers to.

FINAL THOUGHTS:: As the last words were spoken, a huge grin exploded on my face. Pretty much says it all.

RECOMMENDED FOR:: For those who love science fiction/adventure read.

Would you listen to Storm again? Why?

Perhaps with a different narrator.

I love that it's nonstop action from start to finish.

I wasn't thrilled with the voice of the narrator. It was too scratchy or something. I liked him imitation of the non American voices but that's all.

The first book in the series, SYLO, introduces us to the main characters and the problems erupting on Pemberwick Island in Maine. It's fast paced from jump and appeals to boys and girls. Its perfect for young teens who aren't quite ready for Divergent type books but might be a tad too old for standard middle grade novels.

More non stop action! Plus you get a tour of the US and I learned some things about Nevada and not just that Las Vegas is there. I cannot wait to get my hands on the last book. Trust no one, you hear so often in the book it makes you wonder.

I love that this series is head rushing from start to finish. I listened in my car through my Audible app on the phone so I couldn't wait to get in my car and drive!

Good follow-up to the first in the series. I know these are meant for 'younger' listeners but I enjoyed this one as much as the first. My only question is, when is the third in the series being released?