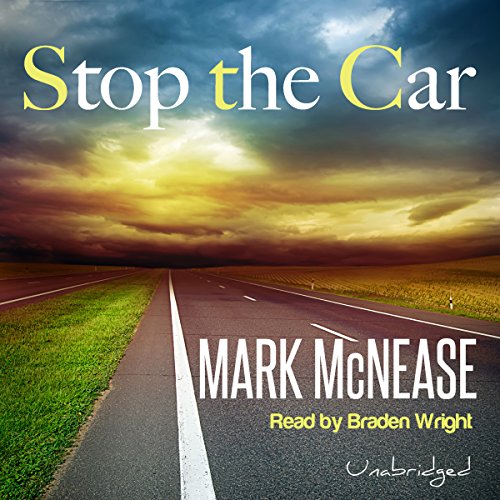 The year is 1977. Three teenagers drive along an Indiana back road, heading home away from the highway, away from prying eyes and traffic cops. One behind the driver's wheel, two in the back seat sampling the merchandise that could get them all jailed. And then, as the car careens beneath a black sky lit only by a million stars, they see it. Something in the sky, something large and close and beckoning with its strangeness.

The boys demand they stop the car. The driver refuses, terrified of what might happen if she listens to them. Whatever it is they see makes the decision for them and stops the car in its tracks. What happens next to them could be real or imagined, but it will never be forgotten.

Would you listen to Stop the Car again? Why?

I don't listen to audiobooks twice but I loved every second of this audiobook.

It made me feel like I was back home in America. There's something about Mark McNease's writing that makes me feel like I'm right in the middle of the book. Like I know the characters personally

Very good. He's an excellent narrator and I thoroughly enjoyed his performance.

The relationships in the book the nostalgic feeling there's an overall modd to this book that stays with you long after you put it down.

I was given this book as a gift in return for an honest review. I'm a big fan of Mark McNease's writing.

Whether or not you believe the main character’s account of things, you will enjoy the trip. This short fist-person psychological/sci-fi piece by Mark McNease follows the experience of a small crew of interesting characters whose counterbalancing exchanges push the story’s forward moving momentum. I loved the narrative’s casual but clever conversational feel: “Granville Indiana isn't the center of anything but itself… It's got a couple of malls that killed the downtown when…"

McNease delivers with surprises that are elegantly placed, and with an ending that left me wondering, but in a satisfied way. Because this piece was so nicely done, I am now interested in exploring McNease’s “Kyle Callahan Mysteries,” which are novel length works.

Narrator Braden Wright stole an already unstoppable show. Better put, he owned it. Braden reads the story as if he wrote it himself— Correction-— as if he LIVED it himself. His ability to combine outstanding articulation with a laid-back, “It’s just the two of us here” personalization is remarkable.

This audiobook was provided by the author, narrator, or publisher at no cost in exchange for an unbiased review. Thanks AudioBlast.

What made the experience of listening to Stop the Car the most enjoyable?

The build up of tension, the perfect pitch and perfect pace.

The blend of pathos and mystery, of the ordinary and the extraordinary.

His obvious connection with the subject matter.

I am a writer. When I listen to a story I hear when sentences falter and when they triumph. There were no false notes in this story, just beautiful, evocative writing. Listening to "Stop the Car" made me want to pick up my pen and start writing, to take part in the magic of creation. Bravo, Mark. I loved it.

You hear about alien encounters over the years and this book is similar to stories and movies about the subject. It was well narrated and an enjoyable short story.

Very short book for when you don't have a lot of time. Well written I liked it and think others will as well. You can't go wrong here if you quick reads.

The story is eerily familiar. I, too, attended college in Indiana in 1977, did drugs, and wondered what that point in life, the future, why we are here in a bigger sense was all about. Thanx for helping me reflect on those days and those thoughts that were and will always be a part of me. Very nice short story!


Reminds me of the kind of short story published in the New Yorker. It kind of rambles along like life at 19, the most memorable of which is spotting an alien ship amidst the farmland and losing three hours of life. I find it to be a fine think piece.

The audiobook is monologued by Braden Wright, who absolutely nails it!

An Eerie And Elegant, Must Read, Short Story

“Stop The Car” is a truly great short story that packs a lot of story in a small amount of time. Set in 1977 and told in a conversational style, this story fires on all cylinders while being a sort of eerie psychological exercise. You will probably find yourself reading/listening to this work more than once for the pleasure of the story and to let it absorb and marinate. “Stop The Car” is an experience that’s definitely worth your time. It will also make you an instant fan of author Mark McNease.

Finally, this audio book was provided by the author at no cost in exchange for an honest review, courtesy of Audio Book Blast.

Where does Stop the Car rank among all the audiobooks you’ve listened to so far?

It's a stop and think, I've also felt like that way before short story. A well chosen narrator with a easily understood voice

The autobiographical aspect of Mark McNease's writing that makes the listener recall feelings of "alienation" from parents, family, friends. Pardon the pun. I think many of the thoughts and feelings stay with us for a lifetime. They resonated with me anyway.

Have you listened to any of Braden Wright’s other performances before? How does this one compare?

I haven't but I would gladly listen to other audiobooks that feature Braden Wright.

Who was the most memorable character of Stop the Car and why?

The first person narrator. Was he ever named?

Thanks for providing this for review. This audiobook was provided by the author, at no cost in exchange for an unbiased review.

The author takes a turn from crime solving to the case book of the X-files in a smart short story brilliantly narrated.

A good short story on its own.

I found this story very interesting. I listened to it twice - once just to absorb the story and again to listen between the lines and kick in my English education. I liked it both times. If this is a lead-in to a book I would definitely get it but it stands on its own very well.
I was gifted this book in exchange for an honest review.