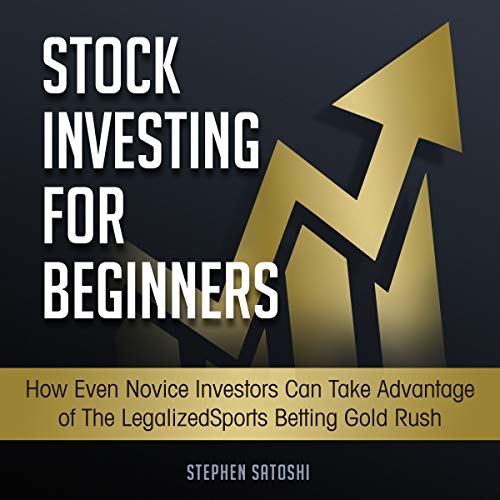 Why are so many regular investors getting rich off sports betting stocks? In May 2018, a Supreme Court ruling produced one of the best investment opportunities of the decade. They ruled a federal ban on sports betting (outside of Nevada) was against the constitution. Which means individual states can now legalize gambling on pro sports games. Thirty-three states in all are predicted to legalize sports betting by 2023. Which means certain casino and racetrack stocks are set to hit the jackpot! And analysts at Morgan Stanley have predicted some may even double by 2022.

Some speculators have stated buying these stocks now would be like buying Amazon stock in 2008. If you’re thinking that you missed the boom, then don’t worry. It’s not too late. In fact, the best is yet to come.

In this book, you will discover:

And no, these aren’t the same run of the mill casino companies the mainstream media has been talking about in every news cycle for the past two months (like Caesar’s or Wynn Resorts).

These are meticulously researched and feature both larger companies, as well as some stocks you may not have thought of.

But you must act fast because two states have already passsed legislation with another three set to do so by the end of the year.

So unless you want another “if only I’d invested back then...” story, don't wait to download today. The time is now. If 2017 was the year of cryptocurrency and marijuana stocks, 2018 is the year of sports betting stocks.

What listeners say about Stock Investing for Beginners

Very thorough jump start to understanding how to invest in the stock market. The presentation of different strategies along with a view of both sides of the coin helps provide a rounded perspective.

Simple, easy to follow, delivered exactly the information I needed to get started in the stock indices - no more, no less.

Break down of the basics in a simple and easy.

Break down of the basics in a simple and easy to follow method. I definitely will listen to more from this author!

I’m a novice investor and this book.

I’m a novice investor and this book had great information and is easy to follow. There are other core books he recommends which I will look into as well.

I enjoyed it, now I can start buying and selling.

I enjoyed it, now I can start buying and selling, instead of trying to beat all the technical analysis and fundamentals of this antique brain.

This is very good

I would highly recommend this to anyone looking to jump into the stock market for the first time. It will provide you with the fundamental grasp you need to limit your losses and maximize your gains.

Will recommend this for sure

Very informative, insightful, and easy to understand guide to intelligent investing. I’ll definitely recommend this to friends and relatives.

This is very helpful

This was an informative audio book that helps aid in stock selection for the do-it-yourself investor or person wanting to learn about investing.

A very great for starter

Great reference and starter especially for someone struggling to understand the stock market industry and terminologies associated with it.

I will recommend this

I recommend this audio book to anyone wanting to learn the Wall Street stock market game and build wealth from it.

This is very good

Great for anyone looking to develop a baseline understanding of stocks and investing. A very good audio book to have.

This is a perfect audio book

Perfect for those who have no understanding of all the complexities and jargon associated with the stock market.

I highly recommend this for people who are looking for books like this that is easy to comprehend and beginner friendly.

This audio book explained not only the basics but even some more advanced concepts in a very easy to understand manner. Good value for money. Kudos to the author.

Simple and easy to understand

Very simple, easy to understand explanations of investment terms and processes. The author lays out a plan to start investing in different financial products and emphasizes the importance of information.