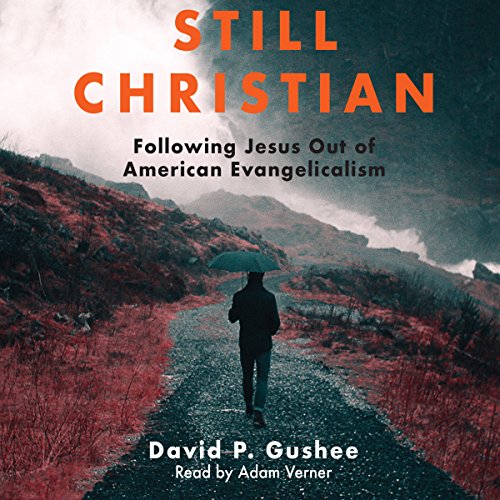 In this provocative tell-all, David Gushee gives an insider's look at the frictions and schisms of evangelical Christianity, based on his experiences that began with becoming a born-again Southern Baptist in 1978 to being kicked out of evangelicalism in 2014 for his stance on LGBT inclusion in the church.

But Gushee's religious pilgrimage proves even broader than that, as he leads his listener through his childhood experiences in Roman Catholicism, his difficult days at the liberal Union Seminary in New York, his encounters with the Christian Right, and more. In telling his story, Gushee speaks to the cultural divisions of a generation, as well as of today, and to those who have themselves been disillusioned by many battles within American Christianity.

As he describes his own struggles to find the right path at different stages of his journey, he highlights the turning points and decisions that we all face. When do we compromise, and when we do we stand our ground? Is holding to moral conviction worth sacrificing friendship, jobs, and security?

As he takes us through his sometimes-amusing, sometimes-heartbreaking, and always-stirring journey, Gushee shows us that we can retain our faith in Christ even when Christians disappoint us.

What listeners say about Still Christian

Important clues to rise of trump and populism

Re-read this recently and enjoyed it even more the second time. Listening to the story of the right wing takeover of American evangelicalism is scary, especially when you see how this made Trump's election, and the worldwide devastation it continues to cause, possible. Writing this review just hours after the fall of Afghanistan to the Taliban makes it clear that books like this are essential reading for global survival.

If you wondered how Evangelicalism has been hijacked by American Evangelicalism this book provides insights. I remember when a lot of what took place in the book was happening in the Christian community. Recently I was asking God what happened to the simple beautiful faith of my youth and how has it become so toxic? This book was a balm to my weary and battered Christian soul. It resonates with my journey. I am not alone, how refreshing.

I know much of this story personally

This book was a unique experience for me. I have a deeply personal connection to some of the story. I was a part of the first class of Ethics students that David taught at Union University. In fact, I think that I was the first to declare the major. It transformed my life. When I arrived at Union I was a proud Fundamentalist. I left a thoughtful moderate and have ultimate found my way to compassionate liberal. I took much of the same ideological journey that David did. Interestingly I arrived at the same destination that he did somewhat before him despite the fact that he was in large part the catalyst for my transformation.

If I can say one thing about David Gushee, it is that he at all times absolutely genuine. There is no pretense about him. His successes have not changed that fact about him. I love this man like I would love my own brother. I commend to you every word he has ever written. Read his work thoughtfully. Do not accept everything he says blindly. If you do you have missed the point. He would be the first I say the same!!

A stand for the Love of Jesus

A great in depth look at views that I have found myself standing for over the years.
David Gushee is a courageous leader in the battle to bring equality within the Christian Church.

David P. Gushee shares an excellent memoir and provides great insight to the ups and downs of over politicized American Christianity and yet leaves me feeling encouraged not to abandon it all. Thanks David for the hope to continue to look for and follow Jesus!