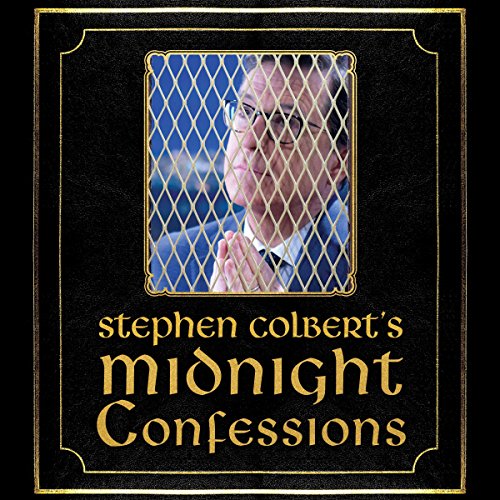 Forgive him, father, for Stephen Colbert has sinned. He knew it was wrong at the time. But he went ahead and did it anyway. Now he's begging for forgiveness.

Based on his popular segment from The Late Show, Stephen Colbert and his team of writers now reveal his most shameful secrets to millions (although, actually, he'd like you not to tell anyone). Midnight Confessions is a collection of Stephen Colbert at his most brilliant and irreverent.

I love this bit on the show, but this is just the whole bit that is on YouTube, bar a cupple of
confessions not shown on tv I will be checking out the review of the actual book before purchasing. still love colbert but this is just a cheap cbs cash grab.

Funny but way too short at 30 minutes! I want to only write as sort a review as this book was

35 minutes long. Makes me wonder if he even tried. Could have added some new content. Bought it to listen to on a short morning flight to Chicago. Bad buy on my part.

Used this as my first (only) free download. Colbert fan, looking for something light for post op recovery. I feel this is a way to make money (not mine) from his fan base. Mind numbing and stupid.

If you enjoy Stephen Colbert, you will enjoy his book. It told me that I need to leave a longer review before it would except my review. If you don't see any more than it is long enough to submit.

So funny! From Colbert Report's collection of True Confessions. 15 minutes or so in length.

Colbert is always funny, and this is no exception, short, but worth a listen if you have extra credits.

Brightened my day! Love Stephen Colbert and his Mignight Confessions on the show nice to hear them on the road

Was Ok for a short book

Could you see Stephen Colbert's Midnight Confessions being made into a movie or a TV series? Who should the stars be?

Book for short, parts were very funny, but most were already heard on his show

Favorite Skits Should Be Longer

Way too short. This is my favorite skit. I was laughing throughout the whole thing.

Too expensive for what provided

Too expensive for what provided. Only handful bursted out laughing. There should have been more material.