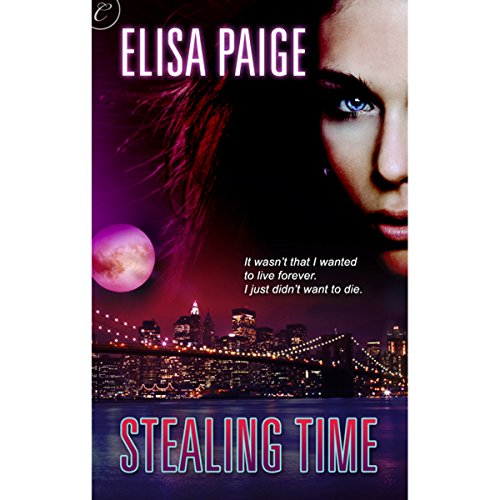 It wasn't that she wanted to live forever. She just didn't want to die.

When artist James Wesley realizes Evie Reed is dying, he is so moved by the beautiful reporter's determination to live that he makes her immortal—a vampire, like him. She's the woman he's been waiting over 150 years for. Though initially shocked by the change, Evie quickly embraces her second chance at life, and love.

Just as James and Evie begin to define eternity together, a zealot breaks an ancient treaty, threatening a peace between humans and vampires that has stood for a thousand years. And when he focuses his hatred on Evie, the immortal lovers find themselves swept up in a deadly supernatural war.

Evie is dying she has cancer, she wants to live and live she does, just not in the manner she's used to. An old world vampire called James comes to Evie's rescue, after all he has been stalking her for the past eight months, (i found this a bit creepy).
The vampire world which James comes from is brutal were Humans are definitely prey and the motif of 'survival of the fittest' applies.

The story did not fly with me as she calmly accepts her new predicament, also the romance angle was very quick and lastly please finish the actual story, you can leave loose threads hanging and teasers to get you to want to read the next book but not such a huge cliffhanger, not cool.

On the plus side it is written well just did not engage me personally, I have been spoilt by far better authors in this genre, and I like to have some sort of conclusion at the end of a book.

It seemed to jump right into the very interesting story which at first left me with lots of questions. But the back story was well woven into the plot and all of my questions were ultimately answered and everything came together as the story progressed. It is a wonderful love story with interesting characters. At times the dialogue seemed somewhat predictable but I almost feel saying that is being way too picky. I thoroughly enjoyed it and the only thing that disappointed me was the ending which left lots of opportunity for a second book. There WILL be a second book - won't there???

Even at 13+ hours it went quickly - I hated to put it down to go to bed. The narrator also did an excellent.job. I highly recommend this book - it's definitly worthy of a credit!

I really liked this book. It was very hard to put it down. The narration was very good too. This is a vampire book that show a group of vampires that struggles to maintain a piece of their humanity against the nature of the Vampire. They struggle against a set of Vampires who decide that humans are just cattle and they are going to rule the world. Yes this is a theme you see alot, but Ms. Paige has some interesting twists through out the book. I was amazed that this was her first book. Cannot wait for her next book.

Not All Vampire Books Are Created Equal...

I am not comparing this to any serious literature, but to a number of other vampire books and series that I have listened to and also read.

This book is so tame, and so mild as to have my eyes rolling at words like "carnal caress" and "butt" and "undies". I'm sorry, but there's absolutely nothing wrong with using the term "nipple", is there?

But, beyond the lack-of-lust wording are some things like the main character, Evie, seeming to think being a vampire and being linked forever to another vampire, James, is just fine,(he is, afterall, gorgeous) but god forbid she think of actually marrying him!

And Evie certainly adapts with grace and aplomb, quickly and easily to first having a terminal illness, then being in a critical car accident, almost dying, and then being transformed into a vampire.

Maybe this is meant as a vampire story for teens.

I almost made it through half the book and couldn't listen anymore. I kept listening and hoping it would get better but finally gave up. Didn't enjoy at all. Disappointing.