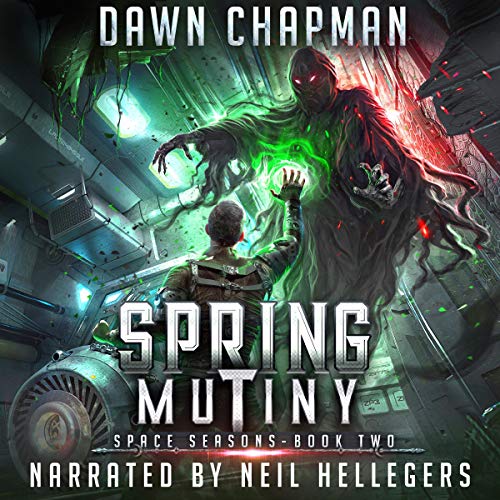 By: Dawn Chapman
Narrated by: Neil Hellegers
Try for £0.00

After escaping with the information they needed, Kyle and his team must plan their next move. While working hard to discover many things about himself, his shipmates, and his denti body, Kyle finds not one...but three stowaways.

An exotic female Kiain who helps him unlock his Kenosi potential, and a deadly Sitha mother protecting her young son. He doesn’t throw them out of the airlock, but pirate and monster infested space isn’t exactly the safest place to be raising a child.

Now fully exposed to their overlords, Kyle doesn’t hold back. He places a winning bid on several top tier Mechs in an obscure part of the galaxy. The final price leaves them with a mission they can’t afford to turn down: they need to rescue the daughter of the local Mech Lord.

Pitted against a heavily fortified base, they need to fight with everything they have to survive.

What listeners say about Spring Mutiny

I really liked this book, the characters where push in a good way to there goal and the space part of the book was fun. The characters friendships is fun even if it feels a bit rushed for how long the MC has been there.

The narrator has done a amazing job with the book and has made the world feel alive. I do recommend you give the series a chance you won't regret it

Compared to the first one this book started off a bit slow for me. Halfway in though...boy does it pick up! We are back on the emotional rollercoaster we started riding in the first book.

I loved some of the new editions to the crew and it was nice to see the character development of the old ones even if sometimes it is not in the direction I'd like to (looking at you Kyle!).

All in all would recommend.

Another season another good yarn

This dark future LitRPG continues with a larger cast to back up the protagonist. This is a loot light, stat heavy story. The focus changes somewhat from the first book with more space adventures rather than the planetary fun of the first.
The lead continues to push himself beyond the game boundaries in his journey to tight wrongs, makes a good few mistakes along the way, but continues to beat the odds.
Well worth a listen,

this is a straight continuation of book 1, so if you liked it, awesome, if not, probably not the series for you...

I actually think Niel upped his game from book 1 and I really like him in this book, great job man!

also, I really appreciate the short release schedule, it is nice not to wait years for the next book!

Kyle and the gang are back and looking to fill out the crew of their spaceship! With enemies on all sides and a ship in desperate need of parts and repairs, will they be able to level up and continue their mission?

Neil does an outstanding job with the narration!

I enjoyed this book even more than the first one!

I can't wait to find out what happens next!

Possible spoilers: The battles seem short to me but there's a lot of dialog between skirmishes. The I'll save everyone at any cost even my three sidekicks has got to stop. Just to unreal sorry. Now now don't do that or I take your points away. Please. My excitement is starting to wane but I still rated the book high because I was vested enough to get pissed at the continuing stupidity of the MC.

Great addition to the Series!

After book 1 I couldn't wait for book 2! Dawn was amazing and let me have a code for reviewing for the second book. Book 3 is already in my cart!
Anyways, I really like how the story continued. You learn a lot of important information about the war and characters. I'm really invested in the characters. I also love how the main character has two other people in his mind. I like how they visit the struggle of having two other people constantly seeing and hearing everything you do. On to the next!

Great Story!
Sitha is now my favorite... and the Narrator nailed it! Well done! I cannot wait to see what happens next!

Getting Harder To Stay Tuned In.

There is close to 2+ hours of stats (and that might be low balling it) and it needs to stop. I love stats, loot, XP, cultivation, all of it. I have over 200 LITRPG titles. Some authors do this well, others use it as a crutch to increase the length of the novel. In this series thus far, the author reads off the MC’s stats almost twice per chapter, and it takes 1.5 minutes to get through the stat sheet. 3 minutes per chapter!? It’s brutal. I hit the skip forward button three times EVERY TIME….If that was all, I might not say anything; however, you skip forward three times, only to hear a mech’s stats now, or another character’s stats. I have skipped up to 4 minutes of stats at one time. Is anybody listening to 4 minutes of stats all at once…? Probably not.

I love hearing the increases but there’s a way to do it that isn’t shoving it down the reader’s throat, particularly when there’s nothing new to report! Animal handling wasn’t relevant for most of this book, but you have to hear about that stat, and a bunch of other ones that are irrelevant at the time. I will reluctantly get the third book, but if this trend continues, I’m out. As of now, it feels like the author is cheating by filling 1/3 of the novel with statistics. Every time you have to skip past the ENORMOUS list of statistics, you get pulled out of the story. They’re important to story progression, but they shouldn’t be a “Get Out Writing Free” card.

Just tone it down a little…. You can write, “Taking another look at his sheet, he noticed both strength and dexterity increased from X to Z, and his Mechanical increased from A to B.” It's streamlined and doesn’t require the 90 seconds of stats every time one of them goes up. If you want to keep posting ALL the stats, just do one big listing at the end of every chapter that people can skip past quickly (along with the aforementioned streamlined increases).

I loved Spring Mutiny! And I think Neil Hellegers just narrated the hell outta' this one!!!
Kyle had a steep learning curve in the first book, Winter Harvest, but now that he's got his feet under him, he's hit the metaphorical ground running. I'm not saying that his stats are great, he still has a long way to go, but he's less likely to pancake and re-spawn! (And out in Space re-spawning isn't an option). Anyway Kyle's not afraid to think outside the box and he's always coming up with novel ideas and getting bonus points... which are always helpful when you're playing a game where losing is no longer an option, because now, your very life is at stake!
The best part is that Kyle's found allies. Allies that he can trust to watch his back, including a deadly Sitha boy that he's sworn aligence to!
Go on! Get the book and feed your inner gamer... but need I warn you yet again? Read the books in order. You have been Warned! ... again! 🤣

loved the book. great narration, danger, suspense, heroic nonsense galore! I also love the character development and seeing solo work taking less of a major roll. keeping so many personalities so well developed is a huge plus as well.

An exciting sequel from Dawn. Actually felt like she improved over the first book. Keep reading as a new book is coming out in 90 days.

Love this MC, man. Seems like a decent enough dude. Getting more credits to continue the story.

If you liked the first, you'll enjoy this one too.