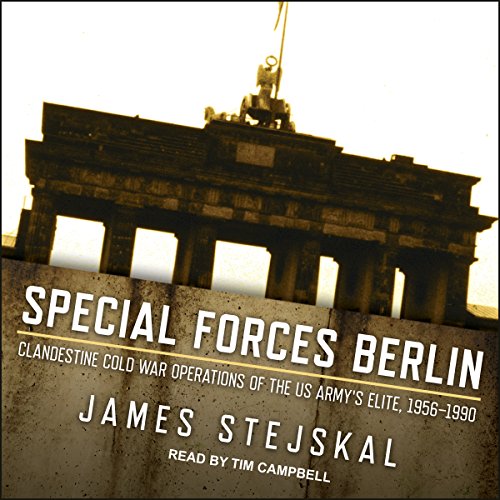 By: James Stejskal
Narrated by: Tim Campbell
Try for £0.00

The massive armies of the Soviet Union and its Warsaw Pact allies posed a huge threat to the nations of Western Europe. US military planners decided they needed a plan to slow the juggernaut they expected when and if a war began. The plan was Special Forces Berlin. Their mission, should hostilities commence, was to wreak havoc behind enemy lines and buy time for vastly outnumbered NATO forces to conduct a breakout from the city. In reality it was an ambitious and extremely dangerous mission, even suicidal. Highly trained and fluent in German, each man was allocated a specific area. They were skilled in clandestine operations, sabotage, and intelligence tradecraft and able to act as independent operators, blending into the local population and working unseen in a city awash with spies looking for information on their every move. Special Forces Berlin was a one of a kind unit that had no parallel. It left a legacy of a new type of soldier expert in unconventional warfare, one that was sought after for missions such as the attempted rescue of American hostages from Tehran in 1979. With the US government officially acknowledging their existence in 2014, their incredible story can now be told.

"Reads like a thriller for much of the time - a small, select force ready for action should the Soviets escalate their activities in Western Europe - nothing much has changed in the last sixty years or so!" ( Books Monthly)

What a fantastic account of another side to the Berlin Wall and the exploits of these fantastic men who lived a truly incredible life. Superb book, enjoyed throughout!!

An excellent introduction to an secret unit.

I enjoyed this insight into thhe US Army unit that was so secret that it's very existence was maintained beyond the end of thhe Cold War.

Although not in DET A. I had the very good fortune to serve with many of its Officer as they came across to serve in the 6th Infantry. To the man they were respected and provided value added to the Brigade. Later I served in a position that provided some visibility of DET A activities. My biggest disappointment with the book is it does not given credit to many of the activities the Detachment did well and routinely. Additionally there is little mention of the regional deterrent effect it had on our adversaries. Also, an irritant was the mispronunciation of USCOB by the narrator.

Great accuracy and attention to detail in this well written, and read book. If you were in the service during this time period this book is for you. This book answered several questions for me as I was stationed in Berlin both during and after the "Berlin Wall."

Basically an unclassified unit history naming commanders and timelines.
There are a few interesting stories.

Peek behind the scenes of the Top secret world of Special Missions Units. Before there was Delta Force or the CAG there was Detachment Alpha in Berlin. Before SEAL TEAM SIX or DEVGRU Special Forces Mission Berlin was already up and running. You learn about it's creation, training and missions and finally it's decommissioning.

Great book, narrator was off.

Fantastic telling of an often overlooked aspect of US special forces. could have used a better narrator.

This is very interesting material, not commonly available otherwise as far as I can find: the reader is unfortunately strangely robotic. I legitimately cannot tell if it’s a computer or not., but I lean towards a computer. The tone is good, pacing is good, but somehow the voice itself sounds very synthesized and I just can’t get over it now that I noticed.

Just awesome. Stories like this need to be taught in schools. Units like SF Berlin are suppose to be a secret but when they are unclassified it is great to learn about. You will not be disappointed!

What an amazing book.

If you're a student of history, especially Special Forces and Special Operations, do yourself a solid and get this.

For individuals who served in the military during the Cold War, this book provides an important context for understanding covert operations in Germany/Soviet Union at that time. The author has undertaken an exhaustive survey of all available sources and conducted interviews with soldiers from that special unit. Little of this is documented by the Army itself. My husband and I lived in Germany in the early 70’s while he was stationed there as a newly minted graduate of West Point. We were married 40 years before I learned he was transporting nuclear warheads during that period. At a dinner at our home two years ago we learned from a dear friend and classmate that he had been part of that special ops unit. Gives a great context for what we were doing there during the Cold War period.

Interesting stories but not compelling

Stories are clogged with military acronyms; the narrator sounds like a robot. But glad to know these soldiers were well trained and prepared to do difficult tasks if war ever broke out.