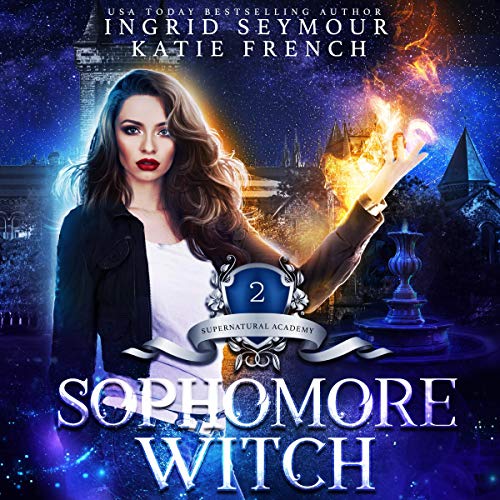 It all happened so fast. One minute Rowan was dying, the next he’d made the biggest mistake of his life.

The Supernatural Academy nearly killed me my freshman year, so when my sophomore year rolls around, I’m determined for things to be different. Sure, Rowan’s a mess, but he’s still studying magic and taking me on hot dates, and that’s all that matters. But what I don’t realize is how freaking obsessed he's become with finding a cure to reverse his new curse.

He wants magic back, and he’s willing to do anything to get it.

It’s not enough that I sign a blood pact with him, giving him access to my magic. And it’s not enough when he loses control. No, nothing will stop him from getting what he wants, which puts him and everyone in his path in danger.

The problem now is figuring out just how far I’m willing to go to save Rowan. And what will be left when it's over.

You will love the continuation of this magical academy series with kick-ass action, hot romance, and earth-shattering magic that will make you tingle in all the right places.

The exciting sequel to the Amazon best seller Freshman Witch. Get it now.

Loved this book. This book has everything: adventure, romance, and a wild goose chase. Charlie and Disha try to help Rowen on his hunt for a cure. I highly recommend this book if you enjoy PNR. Can't wait to see what happens in the next book!

These books keep on getting better and better! I am dying fir the next one

This continuation is heartbreaking from start to finish! The pain and experiences the characters go through, you can feel it with them! I can’t wait to listen to Junior Witch to see what happens next! Also on audio the narrator does a wonderful job!

A quest for a cure to Rowan’s new curse begins

Narrator did a perfect job. Always nice when they use different voices for each character. She also uses other tones for sarcasm, despair and such so this is a very good audiobook!

The story continues right where book 1 ends, no recap so it might be a rocky start for some and for others it just means they can get sucked into the story from the first page. I fell somewhere in the middle and opted to recap the last chapters of book 1 before diving into book 2.
After how the last year ended, the three friends are searching for a cure for Rowan’s new curse but not everything goes as planned. And with the new curse, which made Rowan a Lesser, as in a lesser supernatural being than the witches, there is a lot of tumult going on when the school has decreed that starting this new school year even lesser supernaturals are allowed to attend Supernatural Academy. Although that requires them to have a blood pact, seeing as they can’t draw magic from within themselves and well, they would be going to a school that teaches magic, they need a witch willing to bind themselves with the blood pact. Only after a blood pact will those lesser supernaturals be able to use magic each day, drawing/gaining an amount of their blood pact partner (doesn’t have to be romantic).
After Rowan’s turn, his father changed his mind on the matter of no lessers in Supernatural Academy and so, as of this year, all Supernaturals are allowed to atend the school, as long as they have their source of magic, meaning that they need to have a blood pact.
For Rowan it’s a huge disgrace to have to rely on someone else from now on so when he get’s wind of a myth that might be a cure for his current curse, the three friends follow the breadcrumbs towards salvation. Rowan gets obsessed as time goes by. I imagine he hates his predicament more and more each day, after having his own magic all his life, the loss of that and the disgrace to have to rely on someone else’s is sort of like missing a limb, I guess.
But his obsession leads the team to some dire circumstances and some new revelations.

This book is defintely an intriguing continuation to the storyline but I did begin to wonder that, if those three teenagers had only used their minds more and trusted some of their peers more, they wouldn’t have found themselves in all those predicaments but it wasn’t dumb behavior or annoying. Teenagers still have to learn the longterm consequences of their choices so I do believe it is typical behavior. But in the end they just might have learned that lesson a bit too well... the hard way.

Sophomore year picks up right where the first one left off. Loved the continuation of the story. It was full of action from the start. Can’t wait for book 3

What a hell of a ride!! This is a continuation of book 1. We see the journey that Charlie follows as well as Rowan. Omgeee so hard not to give out spoilers. Know that this is a hell of ride and things happen that I’m still reeling from!!

I really enjoyed this book it was fun and entertaining had a interesting story can't wait to hear the rest of the series.

I received this audiobook free in exchange for an honest review.

Charlie continues to try to learn about her magic and also Rowan is trying to learn about being a vampire. They are bonded together now so Rowan can still use magic and yet he hates what he is. Charlie and her friends are trying to help but disaster just keeps happening. Charlie started to grow more in this book and actually stand up for herself more no matter what. She makes a very hard choice and yet it was one she had to make. The ending has a cliffhanger and I was not seeing that coming. I really want to know what is going on and what actually happened.

This was amazing, the ending I never saw it coming! The narrator is very well talented and kept me engage throughout the audio, she brought all the characters to life! I cant wait for the next book in the series!

I enjoyed this continuation, If Charlie thought freshman year was bad she finds that her sophomore year is something else.