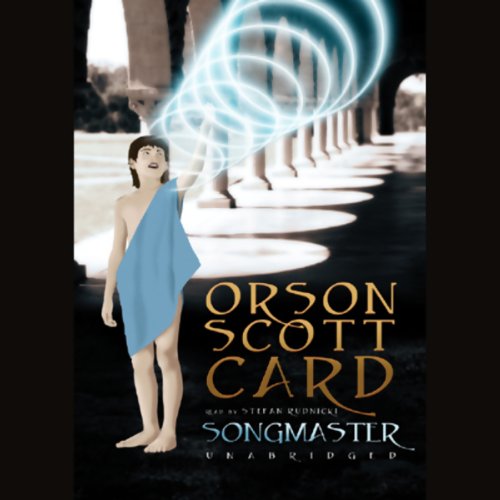 By: Orson Scott Card
Narrated by: Stefan Rudnicki
Try for £0.00

Kidnapped at an early age, Ansset has been raised in isolation at a mystical retreat called the Songhouse. His life is filled with music, and having only songs for companions, he develops a voice that is unlike any other. But Ansset's voice is both a blessing and a curse, for it reflects all the hopes and fears of his audience, and, by magnifying their emotions, can be used either to heal or to destroy.

When it is discovered that his is the voice that the Emperor has waited decades for, Ansset is summoned to the Imperial Palace on Old Earth. Many fates rest in Ansset's hands, and his songs will soon be put to the test: either to salve the troubled conscience of a conqueror or drive him, and the universe, into mad chaos.

"Orson Scott Card is a fine writer with great insight, great idealism, and love." (Science Fiction Review)
"Card understands the human condition and has things of real value to say about it. He tells the truth well, ultimately the only criterion of greatness." (Gene Wolfe)

What listeners say about Songmaster

I also always loved Narcissus and Goldmund by Herman Hesse.

so, really this epic tale must be loved.
and the narration though a little dry to my taste, is superb. its like pairing a good merlot with garlic bread and onion soup. it works.

This is an amazingly deep and sincere book, performed beautifully. The narrator did a wonderful job, one of the best audiobooks I’ve heard from Audible.

I thoroughly enjoyed every aspect of this narration. A story that might have been difficult to read was rendered by the narrator into a story/song that captured my imagination, my emotions, and all my attention. Thank you...

SONGMASTER is a wonderful audio book. Card revisits some familiar themes, including the morality of indoctrinating children to do terrible things, and the high cost of power. He creates an empire of a hundred thousand worlds, but focuses on the intertwined lives of a few individuals. The focus is on a young singer named Ansset. He is a gifted child, blessed and coveted by all who hear him sing. He is an innocent tossed into a royal court seething with Byzantine intrigue. The book constantly returns to the idea that all there is a price to be paid for any gift, whether it is one given by nature or by another human being. Card?s story sucks you into a world that seems too idealistic to be true, but is nonetheless compelling. The psychological dimensions of the novel suggest that Card may be in desperate need of therapy, or that his books are a cathartic release that unflinchingly looks at what innocence means and how love and intent determine how an action should be judged. Only Card knows for sure, and maybe he is still sorting it out. He creates characters you care about and the narrative tension comes from the threat that seems to loom over every decent person in his books. We get to watch his characters grow and change. Most of the characters evolve from one-note beings into people with demons and angels lurking in the deepest recesses of their minds. The pleasure in the book is watching the interplay of these opposing forces and seeing the consequences of the character?s actions. Definitely worth the time and a credit.

There is violence love and various adult situations, but is beautiful, and as most of us know there is good and evil in this world, it's just how we deal with it. This story takes in a life time of one remarkable individual who changes many lives by his existence. If you are turned off by homosexuality in even the slightest form don't get this book. However the story is about strength and overcoming barriers life puts in front of us.
I truly enjoyed this book, even though I have read several of OSC's books, I loved "Enders Game" and "Enchantment" I have read several others and really didn't care much for them. This is the third OSC book I can say I truly loved.

At the finish of the audio book I was shocked to learn this book was written 30 years ago. I feel this is a testament to the authors ability to write compelling stories that are not dated to the times he/she wrote them. Enjoyable work, as I have found all his work I've encountered so far to have been. Worth the time and the credits..

I am a great fan of Orson Scott Card, and have read most of his fantasy and science fiction works, many of them several times. I love his style and voice and will usually buy any book that has his name on it.

This novel is definitely not the best of Card. It is long-winded and chatty in places, and still some central questions go unanswered, especially when it comes to the geography, technology and culture of the world(s) where this story takes place. Card is a true master of storytelling, but this story is alas not told very well. The story itself is interesting enough, though I would like to know more about what a songbird is and how songbirds became so culturally important, and I could do with a lot less of how they are educated. The whole first half of this novel could probably be shortened down to a chapter or two. It feels like Card is trying to re-write The Silmarillion before presenting the actual storyline.

There is a lot of very graphic violence in this book, including brutal murders, suicide and child-molestation. These scenes do all feel necessary to the story, but I'd expect younger readers to be scared by them. There are also a couple of scenes where the reader is led to understand that characters are engaging in (consensual) sex, but these are not very detailed, and there is no mention of what is actually going on under the sheets. The book also treats the subject of homosexuality and homophobia, and there are descriptions of romance and jalousy involving several males and one female. Interestingly, the cultural setting of this story seems to be accepting of pedophilia, which I find very disturbing. I would expect that some readers may take offence from the attitudes expressed by some characters.

I can't recommend this book unless you've already read most of Orson Scott Card's works and are curious about the less excellent of his writings.

I couldn't put it down!

It is unfortunate that those who are objecting to the one consensual gay love scene (NON Graphic) miss the whole point of the scene altogether! Card doesn't explore gay sex as much as he explores violent hatred of gay men. There is another scene where a man who is doing a body search leaves Ansett feeling a bit violated - however the description is only offensive to the extent that pedophilia is offensive.

The greater social and moral statements of this story are far more memorable than these two short scenes in a 12+ hour book. Card has never been afraid of showing us how society shapes us. In the case of songmaster, we explore several different situations where Ansset is changed by the prevailing cultural themes.

It is a powerful and moving book that does not disappoint in any way. It is classic Card - young boy, thrown into a situation where he impacts the world or universe and how those pressures weigh on that boy as he grows up. I loved it!

if you love pederasty...

I'm a big OSC fan, but you need to know going in that this book has heavy man/boy love themes. most of the men in this book spend their time trying to bed a pre pubescent boy. Card himself goes into loving detail regarding the protagonists soft skin and beautiful body.

I'm fairly open minded and liberal, so homoerotic themes don't bother me in and of themselves. however, I found them extremely distracting to an otherwise fascinating idea... a group of people who can use song as a superseding form of communication.

This was my first Card book I read back in the mid 80's, forgot many of the details, enjoyed listening to the audiobook. Some of the reviews say there are some gay parts but I believe they misinterpreted what was happening.

A great, world building story. Anset is a Songbird sent into a world he is not ready for. Great narration.

Interesting world. Card comes up with some crazy sci-fi/fantasy worlds and this definitely falls in that category. This world has pretty dark and dystopian. The story was a little over sexualized but yet it was captivating. The narration was very well done.