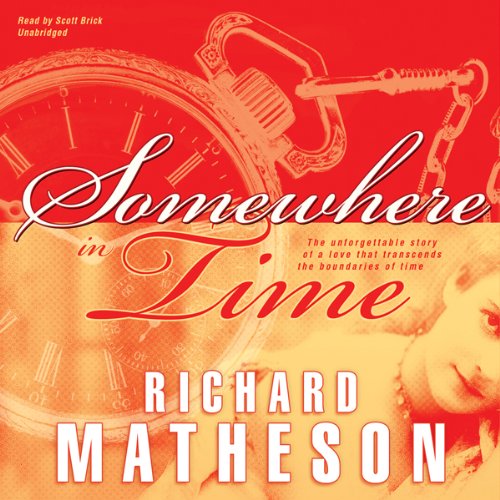 By: Richard Matheson
Narrated by: Scott Brick
Try for £0.00

Written by one of the grand masters of modern fantasy, Somewhere in Time is the moving, romantic story of a modern man whose powerful love for a woman he has never met allows him to literally transcend time.

A dying young playwright staying in a turn-of-the-century hotel becomes captivated by a painting of a beautiful stage actress from the previous century. Obsessed, he begins to study everything he can about the woman and her time and becomes convinced he belongs with her. Through self-hypnosis, he transports himself to 1896, where he finds the soul mate he was fated to meet. But will he be able to stay?

Somewhere in Time won the World Fantasy Award for Best Novel and was the basis for the 1980 cult classic movie starring Christopher Reeve and Jane Seymour.

“The author who influenced me the most as a writer was Richard Matheson.” (Stephen King)
“Stylish and gripping, [Richard Matheson’s] stories not only entertain but touch the mind and heart.” (Dean Koontz)
“Richard Matheson is one of the most respected living American fantasy/science fiction/horror writers…Matheson could not write a bad book if he tried.” (Hartford Courant)

What listeners say about Somewhere in Time

An interesting story let down by its narrator

The story is fine, it's not that. For those of you that don't know, it involves a young writer willing himself to go back in time after he falls in love with the picture of a woman who died decades previously. The fact that he is dying of a brain tumour adds to the conceit that he may be imagining the whole thing. I certainly know which side of the coin I ended up on.

The problem with this adaptation of Matheson's story is that the narrator, Scott Brick, reads the whole thing in a breathy, affected tone throughout the novel. It becomes so irritating that if it hadn't been for the fact that I was so interested in the plot, that I would have stopped listening, although it was a grind. Honestly, I kind of wanted to throttle him. His voice fades down the end of most words, and intonates inappropriately at every opportunity.

For an example of unaffected, trained and solid audiobook acting, try Jake Gyllenhaal's reading of The Great Gatsby. There you'll find an actor comfortable to let the text do the work. I'm afraid that Mr Brick seems to want to put too much of his own stamp on the text, which is a shame.

From researching him, I can see that Mr Brick is an experienced audiobook actor, however, after this experience with his work I will be thinking twice before purchasing any book he narrates.

I saw and enjoyed the film many years ago, and have since become a Richard Matheson fan, so when this book became available, I leapt at it. The book does not disappoint and the film did the book justice. It is a touching love story told in the first person, like so many of RM's books, although the story is in the form of diary memoirs discovered by the protagonists brother. The brother regards the story as the wishful or deluded writings of a dying man, and I suppose this poses the possibility to the reader too. It is a beautifully narrated love story at heart and I would highly recommend it.

The best audio book that I have ever listened to.

For those that have seen the movie (which is fantastic), the book is so much better. The Author and the Narrator were both equally amazing. The descriptions and narration made me feel like I was there, experiencing and feeling everything. I was captivated all the way through and thinking at the end of the story did this really happen? I was left feeling that I have travelled through time whilst listening to this. A-M-A-Z-I-N-G-!

This book is the top of my list, I will be looking out for more books from that Narrator, he made this audiobook Perfect.

Worth Returning To Again and Again

Bid Time Return (the original title of this book) has been one of my favorite books for over 3 decades. I first read it when it was published in 1975 and I've read it many times since. In fact, I own 3 tattered paperback copies and treasure them all. Apparently after the lovely Christopher Reeve/Jane Seymour movie, Somewhere In Time, was released it was decided to change the book title to match the movie for future editions. That's okay. If familiarity with the movie title will get more people to read this very moving, gentle story, it gets my vote.

It is the story of a young man, terminally ill, who takes one last road-trip. He has no real destination in mind. He's just driving. On a whim, he stops at the Hotel Del Coronado for the night. While there he explores the hotel. In 'The Hall of History," he falls in love/becomes obssessed with the photographic portrait of an actress, Elise McKenna, from the late 19th century...and there the tale truly begins.

I am always hesitant to listen to a book I already love in the print edition. Seldom do they meet my expectations of how the voices should sound or words be delivered. However, Scott Brick gets 5 stars all his own for his narration. Somewhere in Time is a first-person story. It is utterly dependent on the reader/listener believing the narrator *is* the speaker. Don't believe the narrator, the story, no matter how well written, will fail. So you can only imagine how stunned I was when I started listening and realized I was actually hearing Richard Collier's voice the way I had imagined it for over 30 years. It took my breath away. Mr. Brick isn't narrating the book, he *is* Richard Collier.

I know that I will listen to this book again and again, once I stop crying over the ending. According to Scott Brick, he had to re-record the last 3 pages because he was crying, too. What more can you ask of a beautiful, romantic story than to be carried away by the emotions it invokes.

This has to be the most beautiful story I have ever read. I enjoyed every moment of it.

If you are looking for a book about time travel you must listen to this book. It is in my opinion one of the best along with Time And Again by Jack Finney. This book has it all, and the narration was outstanding. Scott Brick is one of the best.

Would you try another book from Richard Matheson and/or Scott Brick?

Would you be willing to try another one of Scott Brick’s performances?

No more Scott brick books ever. He kills the Harlan Coben books and every other book he narrates. Why is this guy so highly thought of?! He is boring and mononone.

This is the first I've heard the story that one of my favorite movies was based on. I LOVE this story but I didn't enjoy it as much as I could have. The narrator read every sentence as if it was the end of the story- with a question mark at the end. It's rather difficult to explain but it soured my listening.

Possibly Worst Narrator EVER, Bar None

What is this guy going for?

I keep listening to his overly wrought narrative and can't imagine ANY woman ever being attracted to him, so it makes it hard to believe the female lead character would be. There's no charm, just overwrought histrionics in reading the simplest of sentences.

How does he get work in this field? This book was ruined. I had to stop and get a refund, even thought i was interested in the story.

This is one I will READ rather than listen to, and absolutely no more Scott Brick-narrated books for me.

love in its most awesome form

Even though it is a work of fiction it is told with such dedication that one wishes it were real and that love could transcend time itself.

Would you try another book from Richard Matheson and/or Scott Brick?

The book was good. The narration was hideous! I don't tend to care overmuch for Scott Brick but this was just syrupy misery.

Would you be willing to try another one of Scott Brick’s performances?

Sometimes I force myself to if. I really want the book.

Another great one from Richard Matheson

I've never seen the movie that was spawned from this novel, but I remember my mother enjoying it when I was a child. I've always been a fan of Matheson's sci-fi and horror work, and given my mother's love of the film's version of this story decided to give this a try. I'm so glad that I did. Its not a page turner, its more of a slow boil that heats up gradually, and is a wonderful story of love at first sight. I'd recommend this for someone looking for a slow romance from the man's point of view, which is drastically different than the normal female perspective that we usually get in romance novels.

Not a good listen. Shame for a Matheson novel.

Where does Somewhere in Time rank among all the audiobooks you’ve listened to so far?

Writing was good. Narration bad. Probably falls in the middle to low. Strange because I've only gotten a couple bad reads.

I looked forward to listening to this novel for quite some time. Somewhere In Time was one of my favorite movies. I even pestered Audible for about a year to get it (under the novel's name of Bid Time Return). Why not, since they already had I am Legend, The Shrinking Man, Hell House, What Dreams May Come, and quite a few others. I had finally given up when I ran the author's name and saw the book listed as Somewhere in Time. I've listened to the whole book. Over all, I'd say I liked it. The only part I objected to was the way it was read. He was good at male and female voices, but the constant tremulous voice of the protagonist was really irritating. It came across as a small, fearful person. And maybe my recollection of Christopher Reeve in the roll made me think that this was not the way it should be. But I also don't think that a person portrayed in that manner could attract a strong, female character like Elise McKenna. I don't think you can talk like that for so many hours in real life. I understand that the protagonist was worried; but not to that degree.

I think they already did that. :)

Beyond the problem listed above, the writing was good so it was still a pleasurable listen.