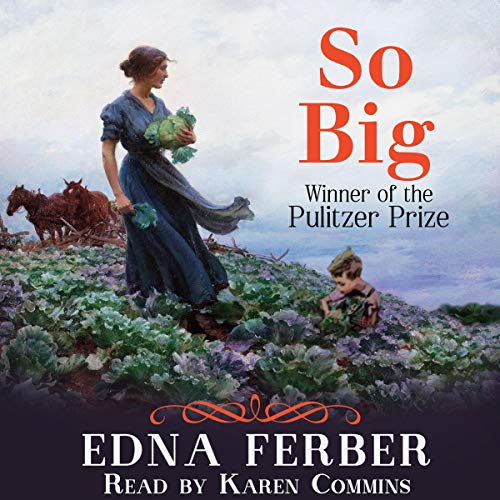 By: Edna Ferber
Narrated by: Karen Commins
Try for £0.00

Author Edna Ferber described the story of So Big as being about a "material man, son of his earth-grubbing, idealistic mother". Left an orphan at 19 years old in the late 1880s, Selina Peake needs to support herself. She leaves the city life she has known to become a teacher in the farming community of High Prairie, IL. Her father had told her that life is an adventure, and one should make the most of it.

Selina sees beauty everywhere, including in the fields of cabbages. She has a natural curiosity about farming and oversteps the woman's traditional role by having the audacity to ask the men questions. She soon marries Pervus DeJong, a farmer. Selina eagerly offers suggestions for operational improvements, but Pervus ignores her, preferring to use the unprofitable farming methods employed by his father.

Though she suffers many hardships, Selina always remembers the importance of beauty, and she admires those who exercise their creative talents. She tries to instill these views in her son Dirk and fights with her husband over the need for their child to get a full education. Once Dirk finishes college and starts work, will he retain Selina's values?

So Big was the first book to have the rare distinction of being the best-selling book of the year and win the Pulitzer Prize for fiction.

What listeners say about So Big

Poor performance but better than nothing

I’ve been looking for An audio versions of the Pulitzer Prize winners. Some have five or six versions. Others, like this one had none. So I was glad to find an audio version. That being said, the audio reader is ok, not great. The sample will probably illustrate my point and if that’s OK with you, I recommend the book. It’s bearable and I finished the book but the reader did nothing to enhance it

This was an exceptionally good book. I enjoy reading books written by authors whose perspective is different from my own and this book certainly had that. I also enjoy books which contain at least a little that is familiar, and this book had that as well. It was written by a woman in the 1920s which gave it a unique perspective. The main characters in the books lived in the Chicago region so that gave me some familiarity with the geography. The book started out OK as it described Selena’s early life. It then became wonderful when it described the hardships she overcame while growing to maturity. It ended out kind of flat as it switched to following the life of her son. The book was well written throughout and really made me feel like I was on a farm in the Midwest in the winter or in the vegetable market in Chicago in the 1920s.