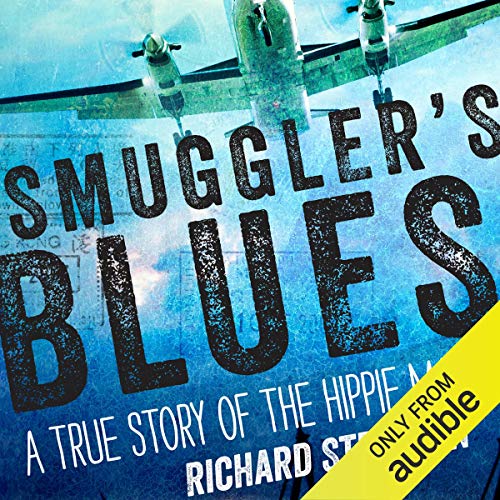 Goodfellas meets Savages meets Catch Me If You Can in this true tale of high-stakes smuggling from pot's outlaw years.

Richard Stratton was the unlikeliest of kingpins. A clean-cut Wellesley boy who entered outlaw culture on a trip to Mexico, he saw his search for a joint morph into a thrill-filled dope run, smuggling two kilos across the border in his car door. He became a member of the Hippie Mafia, traveling the world to keep America high, living the underground life while embracing the hippie credo, rejecting hard drugs in favor of marijuana and hashish.

With cameos by Whitey Bulger and Norman Mailer, Smuggler's Blues tells Stratton's adventure while centering on his last years as he travels from New York to Lebanon's Bekaa Valley to source and smuggle high-grade hash in the midst of civil war, from the Caribbean to the backwoods of Maine, and from the Chelsea Hotel to the Plaza as his fortunes rise and fall. All the while he is being pursued by his nemesis, a philosophical DEA agent who respects him for his good business practices.

A true-crime story that sounds like fiction, Smuggler's Blues is a psychedelic road trip through international drug smuggling, the hippie underground, and the war on weed. As Big Marijuana emerges, it brings to vivid life an important chapter in pot's cultural history.

What listeners say about Smuggler's Blues

Awesome insight into another time. Many thanks Richard - I hope you have found peace

MANY MANY AND TOO MANY NAMES DROPPED

Started off really good, sounded like a true story but half way thru started to feel like I was listening too some sort of fiction. Shame really as I was enjoying it.
Don’t let me put you off tho, narration was good.
DEANO

I really liked it, I couldn't sleep one night and started to listen to this book and it just gripped me. I just like listening to people who live life on their own terms and the perils and pitfalls, lessons and of course rewards they experience from living their own lives, and not a life borrowed from another. This is what attracted me to the book, I don't so much care for the 9-5 life myself to be fair so maybe this is one reason I was drawn to this mans story. It also fascinates me as a psychology graduate what is behind such extremes of human behaviour and such high levels of risk taking. What drives people like this? I think the author does a good job of revealing this inner 'angst' so to speak, to shed light on what drove him forwards each day. The story was more than enough to amuse and entertain me for 8 hours anyhow! Great listening. Bravo sir! Bravo!

Like a bad Mills and Boon novel at times

To say this story is about a hard nosed drug smuggler some of the flowery language involved made me nauseous at times. Why use five words when 45 will do?
The story itself is quite good but it should have just stuck to the facts rather than the self-indulgent words used.

What could Richard Stratton have done to make this a more enjoyable book for you?

Just not a very good audio book to listen to or follow. But the intro sounded good.

I think the story could have been good but the author/voice artist was not good. It pays to hire a professional in some cases and this is defineltly one that would have benefited from that

nothing the story was good

It sounded like he was reading word for word

What character would you cut from Smuggler's Blues?

authors should pay a voice actor

What could Richard Stratton have done to make this a more enjoyable book for you?

Not much. He has no self-awareness of his own hypocrisy and cluelessness. Apparently the rest of the world cannot measure up to the "high" moral standards of a drug demented criminal.

What character would you cut from Smuggler's Blues?

Unintentionally funny in an ironic way.

what is going on with the sequel!

audible get this man's other books on the service asap! come on! how are we not able to finish the story!

Anyone who can write and perform a real life story like this true life tale of hubris and imagination deserves his place in literary history along side his personal friend Norman Mailer.
A story that takes off like a bullet and never slows down for a moment!

The author keeps up a fantastic pace. It didn't get bogged down with minutia while giving you everything you need to know.

If you’re looking for 8 hours of a self loathing hippies confessions wrapped in a mildly entertaining story you might like this book. Perhaps if he stuck more to the story than his mindless ramblings using every adjective in the dictionary it would been better.

An awesome book!!! A word of warning, though... once your start listening, it grips you entirely. Hard to put down.

If you could sum up Smuggler's Blues in three words, what would they be?
An exciting read if regarded as only partially true.

What three words best describe Richard Stratton’s performance?
Stratton is quite articulate in his narration of the book. Easy to listen to.

Any additional comments?
A pretty good book if you can overlook the far-fetched claims made in the first few pages. A DC-6 abandoned on Fox's airport in April (when there are no leaves) would have been noticed by everyone travelling on the opposite side of the Sandy River on Davenport Flat. I certainly don't remember anything of the sort, and can't seem to find anyone to substantiate this claim-even Stratton's "carpenter". Kinda spoiled the rest of the book for me.