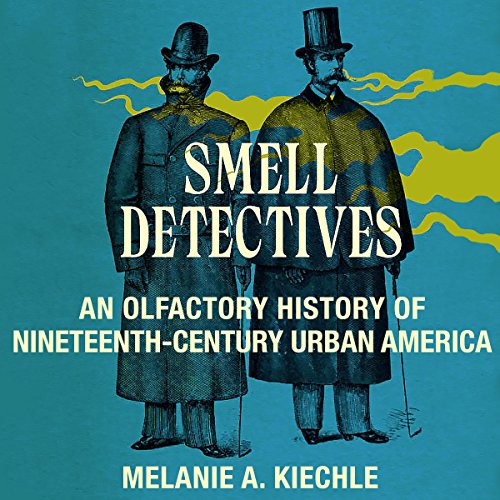 By: Melanie A. Kiechle
Narrated by: Dana Brewer Harris

What did 19th-century cities smell like? And how did odors matter in the formation of a modern environmental consciousness? Smell Detectives follows the 19th-century Americans who used their noses to make sense of the sanitary challenges caused by rapid urban and industrial growth. Melanie Kiechle examines nuisance complaints, medical writings, domestic advice, and myriad discussions of what constituted fresh air, and argues that 19th-century city dwellers, anxious about the air they breathed, attempted to create healthier cities by detecting and then mitigating the most menacing odors.

Medical theories in the 19th century assumed that foul odors caused disease and that overcrowded cities, filled with new and stronger stinks, were synonymous with disease and danger. But the sources of offending odors proved difficult to pinpoint. The creation of city health boards introduced new conflicts between complaining citizens and the officials in charge of the air. Smell Detectives looks at the relationship between the construction of scientific expertise, on the one hand, and "common sense" - the olfactory experiences of common people - on the other. Although the rise of germ theory revolutionized medical knowledge and ultimately undid this form of sensory knowing, Smell Detectives recovers how city residents used their sense of smell and their health concerns about foul odors to understand, adjust to, and fight against urban environmental changes.

The book is published by University of Washington Press.

"Extends the field of environmental history in new and fascinating directions." (Michael Rawson, author of Eden on the Charles: The Making of Boston)

"A bottom-up history that is necessary to truly grasp the evolution of cities." (Martin V. Melosi, author of The Sanitary City: Urban Infrastructure in America from Colonial Times to the Present)

What listeners say about Smell Detectives

Kiechle quite rightly proclaims that she is helping to pioneer a new branch of history: sensory history. Sensory history focuses on how stimuli affect people’s senses. It is a form of cultural history, in that it explores the everyday influences on the lives of ordinary people and their responses to those stimuli. In the process, sensory history helps us understand better the culture and environment of the period studied.

Kiechle has started with the most difficult sense to study—that of smell. By their nature, most smells are evanescent, and everyday smells tend not to be mentioned or recorded. Even unpleasant smells, unless they become extreme, are rarely discussed.

Kiechle also points out that we have fewer words to describe smells than we do for our other sensory perceptions. In addition, smells are very difficult to measure and almost impossible to preserve. Therefore, to detect and track down a bad smell, time is of the essence. Public involvement is required at the time and in the vicinity of the smell.

For a historian to track down smells from two centuries past is a daunting job. Kiechle, however, has done a great job researching how and what people smelled and how they reacted to those smells. She has used sources such as official complaints, letters to the editor and court records to reveal the general, public reaction to stenches—what, at the time, was men’s domain. She has also ingeniously used depictions of everyday life in novels and home advice manuals to illustrate how women coped with smells in the home.

At the start of the period covered by the book, the prevailing wisdom, called miasma theory, was that foul odors actually caused diseases. Therefore, smells could be more than annoyances; they could be life-threatening. People responded to these smells by wearing nosegays or smoking cigars to try to mask the odors and by building parks and using ventilation to try to clean the air.

The Civil War, with its stenches of both battlefields and military encampments, brought urban smells to masses of people not previously exposed to them. This exposure, combined with the intensity of the smells, helped bring discussion of the dangers of smells, and the means to mitigate them, more into the open.

After the Civil War, rapid industrialization brought new and stronger smells, as well as the concentration of foul odors in industrial neighborhoods. Dealing with these new threats elicited the efforts of experts, and these experts struggled to get the authority to regulate smell producers.

The last half of the 19th century also saw the general acceptance of germ theory—that diseases are caused by microbes, not smells. That acceptance accelerated the importance of experts, and it also led to smells being more of a social, rather than a health, concern. Given improvements in transportation, the upper and middle classes were able to move away from smell producers and still commute to work. The neighborhoods around the industrial production of foul odors were left to the poor and racial and ethnic minorities. Kiechle calls this smell segregation.

The increasing importance of experts diminished everyday public involvement in combatting odors, a trend that Kiechle decries. While experts may be needed to identify the specifics of smells, on-the-spot sensing of odors is just as vital today as it was in the 18th century.

Therefore, cooperation between the public and the experts, rather than antagonism, is needed. Lack of public involvement can lead to odors being missed. Lack of respect for expertise can lead to science deniers, a phenomenon all too common these days.

Kiechle has done an admirable job both in breaking new ground in the study of history and in explaining the everyday worlds of the 19th century, much of which still pertains today.