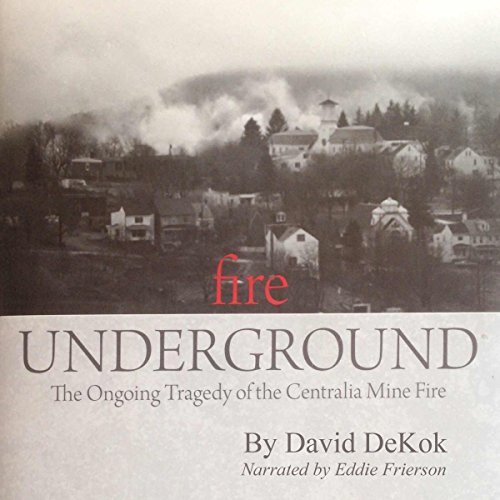 How an underground fire turned a Pennsylvania community into a ghost town. On May 27, 1962, a fire set to clean up the town dump outside Centralia, Pennsylvania, spread by accident into abandoned coal mines beneath the small town. This spawned the environmental disaster known around the world today as the Centralia Mine Fire.

Journalist David DeKok, the author of this book, reported on the mine fire from 1976-86, when the fire was at its peak. Clouds of steam rose from the earth and the ground could collapse without warning, as it did on Valentine's Day of 1981, nearly killing a 12-year-old boy, Todd Domboski.

That the fire reached this critical mass was due to years of government incompetence. The early projects by the state of Pennsylvania in 1962-63 to stop the fire all ran out of money before the job could be done. The U.S. Bureau of Mines built an underground barrier in the late 1960s to keep the fire out of Centralia, but it began failing by the mid-1970s. A misguided decision by the federal government in 1978 to close a vent pit left open by the state in 1963 to pull the fire away from Centralia sealed the town's doom.

As the fire worsened, Centralia's people - some of whose families had been there for five generations - struggled with the daily reality of clanging gas alarms and sick children. They began to fight among themselves over what to do. In 1983, as the world watched, they voted 2-1 to accept a federal government offer to relocate all of them. By 2000, all but a half dozen of the thousand who had lived there in 1980 were gone, along with their homes and churches.

Centralia exists mainly in memory today. Nature is reclaiming the blocks where homes once stood. Tourists come from around the world to see the town with the underground fire and especially the wrecked highway, split open by that fire. It was a tragedy that did not have to happen.

What listeners say about Fire Underground

Truth is stranger than fiction!!!

It was a story that I knew nothing about before listening to the audio book.

I love the narrator, Eddie Frierson who makes the book come alive.

The tragedy of the entire situation moved me throughout the book.

A town slams its head against the wall for 30 year

The story of a poor town and 30 years worth of ineffectual government officials not having the courage to tell the people of Centralia, "yes, you are correct. No one gives a sh*t about your town."

I gave this book 4 stars, because DeKok does a nice job, but really, it's not 4-star story. It's page after page of people slamming their head against the wall; white entitlement; government ineptitude; a pinch of greed and a dash of mental illness and a slice of high drama.

How does something moderately horrible simmer for 30 years? This is that story.