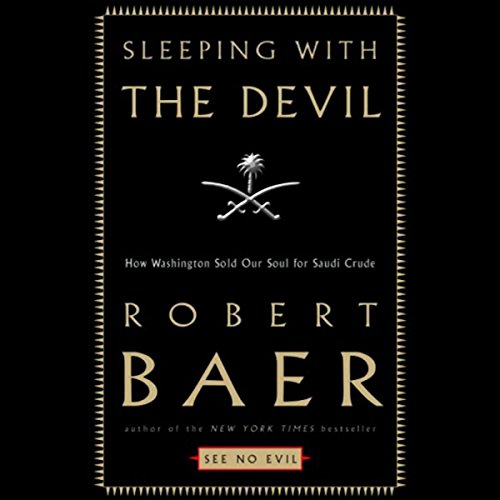 Sleeping with the Devil

How Washington Sold Our Soul For Saudi Crude
By: Robert Baer
Narrated by: Robert O'Keefe
Length: 5 hrs and 59 mins
Categories: History, World
4 out of 5 stars 4.2 (5 ratings)

Sleeping with the Devil

The United States' addiction to oil has meant that the country has to remain good friends with the Kingdom of Saudi Arabia - regardless of how the Arabs behave. The Kingdom has been proved to be bankrolling terrorist organisations, distributing enormous amounts to an indolent extended royal family so that they can enjoy a lavish lifestyle, buying up western industry, and of course, maintaining numerous Swiss bank accounts. So explains ex-CIA operative Robert Baer in his latest work, Sleeping With The Devil.

Saudi Arabia is sitting on the world's largest reserve of crude oil, and that oil is much easier to extract in that country than anywhere else in the world. The Petrodollars pouring into the economy has seen massive investment in infrastructure, hospitals, schools, and of course - mosques. Yet in these holy places, the populace is exhorted to hate the United States, the western world, and non-Muslims. Some of the terrorists who carried out the 9/11 atrocity were from Saudi Arabia. But the United States, says Mr. Baer, desperately dependent on the flow of gasoline, still bows and scrapes...

Robert O'Keefe provides the narration, which totals just over six hours. This was another book that I listened to in one sitting, and thoroughly enjoyed. Mr. O'Keefe has a rich-voiced American accent, making for an easy listen despite, at times, being a difficult subject. The audio quality is superb, particularly at Audible Format 4, quite obviously a direct digital recording. This book is an interesting and enlightening way to spend six hours!

In his powerful new audio book, Robert Baer, author of See No Evil, turns his attention to Saudi Arabia, revealing how our government's cynical relationship with our Middle Eastern ally and America's dependence on Saudi oil make us increasingly vulnerable to economic disaster and put us at risk for further acts of terrorism.

For decades, the United States and Saudi Arabia have been locked in a "harmony of interests." America counted on the Saudis for cheap oil, political stability in the Middle East, and lucrative business relationships for the United States, while providing a voracious market for the kingdom's vast oil reserves. With money and oil flowing freely between Washington and Riyadh, the United States has felt secure in its relationship with the Saudis and the ruling Al Sa'ud family. But the rot at the core of our "friendship" with the Saudis was dramatically revealed when it became apparent that fifteen of the nineteen September 11 hijackers proved to be Saudi citizens.

In Sleeping with the Devil, Baer documents with chilling clarity how our addiction to cheap oil and Saudi petrodollars caused us to turn a blind eye to the Al Sa'ud's culture of bribery, its abysmal human rights record, and its financial support of fundamentalist Islamic groups that have been directly linked to international acts of terror, including those against the United States. Drawing on his experience as a field operative who was on the ground in the Middle East for much of his twenty years with the agency, as well as the large network of sources he has cultivated in the region and in the U.S. intelligence community, Baer vividly portrays our decades-old relationship with the increasingly dysfunctional and corrupt Al Sa'ud family, the fierce anti-Western sentiment that is sweeping the kingdom, and the desperate link between the two.

A real eye opener. Why the hell don't the politicians know all this? And why have the media not told us? fascinating, essential reading.

The Saudis, who I remember were touted as our "friends" during Gulf War I, are revealed for the corrupt kleptocrats that they really are, with all of their funny money deals and blatant interference with the machines of American politics. What's worse is, they support our terrorist enemies... and our government is left apologizing for the Saudis, because there is little else that we can do without risking the largess that comes from their oil coffers. This book is another key to unlocking the mysteries of the War on Terror. I highly recommend it.

55 of 58 people found this review helpful

oh, what a tangled web we weave...

This is a historical context style audiobook on current affairs like no other. Writen by an ex-CIA agent, the perspective is unique and provocative. I found myself reading the world press with new eyes. Baer convincingly illustrates how inextricatively tied we are to the corrupt House of Sa'aud. He shows how fragile their hold on power in the kingdom really is, and as a result why they support the Muslim extremists so lavishly. Baer also hypothosizes a bit on what our future may hold if the kingdom should collapse. The audiobook is read by the author whose style is that of an information gatherer, not an actor, which adds to the tone of the work.

This book was chock-full of fascinating facts and linkages between the US Government, the Saudi royals and the confusing web of Mid-East governments and Islamic extremist terror organizations that the American public is only just beginning to become familiar with in the aftermath of 9/11.
Baer includes a bit more emotional rhetoric and "conspiracy theory" than I am comfortable with in a non-fiction work, but he provides a solid primer on the tangled web of US/Saudi/Mid-East relations nevertheless.

20 of 21 people found this review helpful

An interesting primer on the Saudis and their ties to our government. A real wake-up call that I hope is heard by both parties.

a time, effort and money saver

This book is a delight to read. I heard it twice and had two dozen of my friends buy the book. It is about 75% accurate with good analysis. I can say with a great deal of certainty - having lived in the Middle East for 20 years - the balance 25% of comments and observations were quite superficial and lacked an in-depth analysis or investigation. It is a must read for those who are considering doing business in Saudi Arabia. It would be a time, effort and money saver. I wish I read it ten years ago!!

A confirmation of your worst fears from the ineptness and impotency of the CIA and the El Saoud, to the complete undermining of the West by a few plastic explosives in the primary oil production region of Saudi Arabia, to a clear intelligence of the use of militant Islamic Fundamentalism to parley this vast reservoir of dynamite.

I loved this book and really thought it was well laid out and presented. I am however curious to why Robert Baer never once mentions the infamous "Torricelli Principle" which restricted the informants CIA agents could pay. Throughout the book Baer constantly complains the CIA did not have informants in a number of terrorist organizations and also doesn't hold back on naming names at the highest levels but for some odd reason, Senator Torricelli is completely ignored.

I found Baer's facts fascinating. He was obviously a dedicated CIA operative and was able to learn in-depth information on his subject through tenacity and endless curiosity. Although the story was sensored to ensure no security leaks occured, the facts that remained told the story of corruption between Saudi Arabia and the US well.

I would be fascinated to read more work by Baer that delves into the specific areas in more detail on terrorist groups and how they were created, funded, trained and supported by various governments.

It appears that our country is run by the Sauds

This is an eye opener. With all the partisan argument going on, we hear nothing of the money that finds its way to our politicians on both sides. Given the recent OPEC increase in oil prices, I suspect that Bush is not bending to their money. This is quite disturbing since he appears to be receiving fire from all sides. I would be willing to bet that there is Saudi money behind these attacks, but apparently we will never hear about it. Very distrubing.

I have the utmost respect for Robert Baer as a person and loved "See No Evil" recommended it to many because the book was not only illuminating but you could feel his passion and patriotism unfolding as the book progressed. This book had none of that. I hope he has not become bitter or he needs a paycheck. He is better than that.