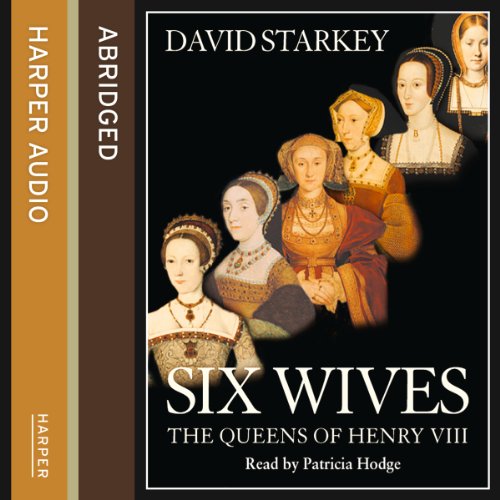 By: David Starkey
Narrated by: Patricia Hodge
Try for £0.00

The first of Henry VIII's wives was Catherine of Aragon, the pious Catholic princess who suffered years of miscarriages and still births and yet failed to produce a male heir.

As Henry VIII's interest shifted from her powerful Hapsburg relations and drifted towards France, so began his obsession with the pretty Lutheran Anne Boleyn.

Jane Seymour's submissiveness was in contrast to Anne's vampish style, and Henry married her on the day of Anne's execution. Jane died soon after giving birth to the longed-for son.

There followed a farcical "beauty contest" which ended in the short marriage of the now grossly overweight Henry to "the mare of Flanders", Anne of Cleves.

The final part of Six Wives contrasts the two Catherines; Catherine Howard, the flirty child whose adulteries made a fool of the ageing King, and Catherine Parr, the shrewd, religiously radical bluestocking.

What listeners say about Six Wives

I now know a lot more!

I have always known Henry VIII had six wives, but my knowledge ended there. I could not remember their order, who was beheaded, or who suvived, let alone how long each marriage lasted. Thanks to this book all is now a lot clearer, and my desire to learn more 'history' has been wetted. Not that it is an easy book, it assumes some knowledge of historical terms and dates and names fly at you with amazing and sometimes bewildering regularity. I found regular visits to a well known on-line encyclopaedia, both necessary and helpful and was in need of family trees to keep track of everyone as well! My only minor concern is that quotes are taken from still existing letters from the period written obviously in 'old' english, the author also uses this 'old' english to reconstruct conversations and I could not therefore always tell what was factual and what was supposition. Overall an enjoyable and educational read..........now what did happen to Mary and Edward?

Good but too short

It is well-written and well narrated, but I'd have preferred an unabridged version - there didn't seem to be enough detail and the time period was sped through.

All six wives brought to life

Immensely enjoyed this book. The background political stories got a bit heavy for me at times, but I just let that wash over me and was carried along by the story. It's very interesting to find out why each queen was "ended". Some queens appeared to be players themselves, while others were only puppets in a game.

Enjoyable history of the lives of Henry VIII's long suffering wives. It was interesting to get the historical truth about the lives of these famous queens, who have featured so much in novels and films recently.
Facinating story, which is just as extraordinary as the Hollywood versions and which was riveting listening. Beautifully read.
Highly recommended.

nice comprehensive study of the six wives; if not abridged.
very well read and enjoyable.

Unlike most historical books on Henry VIII wives, Starkey's book focuses proportionately on each wife. Most people who study Henry, often know about the first three wives in some detail. I was particularly impressed with the detail of the last three. oh, and of course, David Starkey's subtle British humour appears too.

This Henry the eighth book

This Henry the eighth book was very interesting and informative.
Anyone who is interested in Henry it is worth a iisten I enjoyed it very much

An absolutely riveting text. I was ignorant of King Henry and his wives but now am able to think outside the box. This text gives emoyional, psychological, historical contexts to events.

As always even abridged David Starkey's words are a good combination of informed without being patronising. The only issue I had with this recording is the insitence of mispronouncing the name Wriothesley. I kept shouting Risley at the recording.