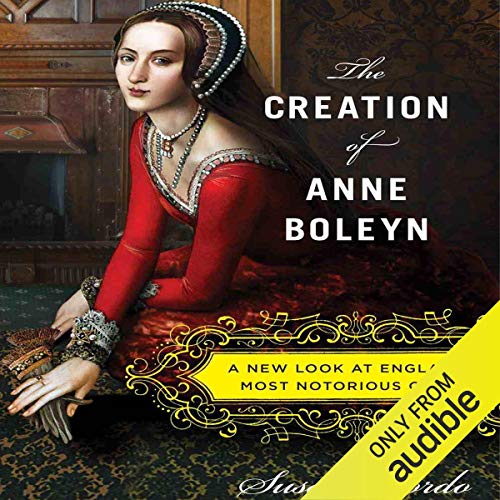 The Creation of Anne Boleyn

By: Susan Bordo
Narrated by: Barbara Rosenblat
Try for £0.00

Part biography, part cultural history, The Creation of Anne Boleyn is a fascinating reconstruction of Anne’s life and an illuminating look at her afterlife in the popular imagination. Why is Anne so compelling? Why has she inspired such extreme reactions? What did she really look like? Was she the flaxen-haired martyr of Romantic paintings or the raven-haired seductress of twenty-first-century portrayals? (Answer: Neither.) And perhaps the most provocative questions concern Anne’s death more than her life. How could Henry order the execution of a once beloved wife? Drawing on scholarship and critical analysis, Bordo probes the complexities of one of history’s most infamous relationships.

Bordo also shows how generations of polemicists, biographers, novelists, and filmmakers imagined and re-imagined Anne: Whore, martyr, cautionary tale, proto “mean girl,” feminist icon, and everything in between. In this lively audiobook, Bordo steps off the well-trodden paths of Tudoriana to expertly tease out the human being behind the competing mythologies.

What listeners say about The Creation of Anne Boleyn

Loved this, as I always enjoy Susan Bordo's work. She is one of the few academics whose writing engages me right from the start, and keeps me glued to the page - or headset, in this case.

I was taught during a Catholic upbringing that Anne Boleyn was a six-fingered whore and scheming monster, who single-handedly forced Henry VIII to abandon the Church. Even as a teenager I thought that was a bit much, but never took the trouble to find out for myself who this fascinating woman had really been. No-one has made it clearer that we actually have very little real information to go on!

I love Susan Bordo's clarity and the way she helps me learn how better to approach a topic - history, and historical fiction are two of my favourites; I doubt that I will look at either in exactly the same way again.

WOW. This book has convinced me ( not that I need much convincing) a largish historical fiction writers do very little, if any research into their chosen topic. This will not stop me reading them but I will use more than a pinch of salt with them. Susan Bordo seems to be a woman after my own heart, with a wonderful narrator who reads the text putting the best inflection in her voice and incredulity where needed. Super book and narration.

Particularly enjoyed the look at cultural impact of different narratives of Anne Boleyn. I haven't seen much of the referenced material, and was unaware of many of the myths debunked in the first place, but Susan Bordo's excellent storytelling meant this didn't matter. Definitely recommend to anyone interested in history, feminism, sociology, and media. Narrator also did a fantastic job!

Very interesting historical exploration of how the image Anne Boleyn was shaped and reshaped through the years.

A new Insight on a thoroughly investigated Anne

loved it, took a little while to warm up at first. but afterwards it was thoroughly compelling. I have yet to read an historical book that compares and contrast so much other historians, pieces of pop fiction and tv. I would recommend this read to those who wants to hear something else about Anne Boleyn, other than the 'wanton vixen'

The title says it all

I stumbled on this as I had just listened to another book narrated by Barbara Rosenblat (and loved her voice) and I am also interested in Anne Boleyn as a historical figure. I was surprised to realize that this really is about the "creation" of Anne Boleyn, specifically as she is portrayed in literature, plays and movies. I have never watched the Showtime series "The Tudors" which was referenced a lot and so I didn't have a good vantage point at times to truly understand what the author was speaking about. It was illuminating to hear the evolution of Anne which has been taking place since the early 1800's and to see that there is still a roaring debate even up to this day about who Anne was "really". Anyone who has watched movies or read historical fiction about Anne will no doubt enjoy this book.

Would you consider the audio edition of The Creation of Anne Boleyn to be better than the print version?

YES! Barbara Rosenblat added so much to the text. She read it with the wit and sarcasm the book is intended to be read with. I admit (and I don't do so lightly), I could have never have matched Rosenblat's mastery and enthusiasm in my own mind. Rosenblat's style is fun and simply delicious!

What other book might you compare The Creation of Anne Boleyn to and why?

Hmmm, I can't think of any. This book had so much going on. It's written in that contemporary way that women (especially feminist) are writing today (like in "American's Women: 400 Years of Dolls, Drudges, Helpmates and Heroines" by Gail Collins to give an idea and that too is another great read). You know, it's sorta like talking with your girlfriends. That is one of the most charming things about this book. When you read this, it's as if Bordo is poring you a glass of wine saying "now, about that sixth finger..." She goes into the TV series, films and books on Henry and Anne and shakes out a lot of the BS. She does this in a scholarly academic way that allows the reader to trust her with her piles of research, references and historical documentation.

Have you listened to any of Barbara Rosenblat’s other performances before? How does this one compare?

I haven't. I did look her up on Audible but nothing else she has done looks compelling to me. I will just keep re-reading this one, ha!

You know, I really did. Bordo asks one question I never thought of before and that is simply why. Why in the hell did he do it. I mean he was a known cheat, (having already had at least one son out of wedlock by this point) so why would he kill her. Granted her allegations (all false of course) that she had slept with George and countless others is gripping but still, why didn't he just send her to a nunnery or lock her in the tower. The horror of it really gets you like being bitten--he chopped off her head. One day he was making love to her, and another legally ordering her beheading. It hits you as you pour over this text. She writes on why Henry might have done it in great detail...so I won't spoil it here on what she suggests!

Long before I saw The Tudors I loved Elizabeth I and Anne Boleyn. I would childishly stomp my feet at the back covers of Philippa Gregory's novels because I was looking for good, realistic, Tudor fiction.

Susan Bordo did a marvelous job portraying Anne as accurately as she could, acknowledging the lack of impartial historical documents (of course no such thing exists, much less for such a decisive lady). She was fair to other accounts of Anne, fiction and non, screen and print, to a fault. Ms. Rosenblat was a fantastic narrator, giving the biography the right twist of sarcasm and wit at their obvious parts.

Overall, this was quite an enjoyable listen.

When Anne’s head came off, her words and images, and even friendships were erased, so every image we get of Anne says more about the person writing about her than it does about the subject.

Susan Bordo gives you all the angles, all the trashy viper-pit details of royal life, and still separates the facts from speculation. Her chatty, dry, deadly wit make this audiobook addictive.

Barbera Rosenblat brought so much sensibility and sharp-tongued knowing humor to the reading. She’s a perfect match.

Where does The Creation of Anne Boleyn rank among all the audiobooks you’ve listened to so far?

This is a very well written and researched novel. It presents a more balanced perspective of Anne Boleyn as well as how her legacy has been shaped by the culture not only of her time but of those that came after.

Anne Boleyn as seen through the years

Susan Bardo compares the view of Anne Boleyn by courtiers who lived when she lived to older biographies including those in the eighteen hundreds, and more modern views of her, including historical fiction by Margaret George, P. Gregory, and Alison Weir. Bardo even includes the mini-series the Tudors. I don't think as it could be concluded that she was being particularly critical of these authors. They are fiction, regardless of the academic credentials of the author.

She is harder on writers of popular history, (like this one) who repeat rumors that cannot be substantiated by anything concrete. Even the famous letters King Henry sent her, were not found in England but in the vatican.

The book is interesting. Barbara Rosenblat is great as always.

loved all the information. I have need listened to a book like this! huge fan.

a fresh look at a real feminist hero!

an informative look at the real woman behind the ideology, told by a woman with a clear and sharp voice. long live this, the true Anne ❤👑

I have been obsessed since I randomly selected Anne Boleyn as the subject of my sophomore English term paper. I love everything about the Tudor period and read anything I can get my hands on. This audio book was amazing and drew me right in Wonderful narration compliments the engrossing story in the best way. Highly recommended

Anne Boleyn is a historical figure who has inspired a massive amount of fascination over the last few centuies since her death. In this piece, Bordo examines not only Anne Boleyn as a person, but also the four centuries worth of analysis and media representations dedicated to her. This study is incredibly engaging as it examines the change in the perspective of Boleyn as the times and culture progresses. This is book is well put together, informative and entertaining.