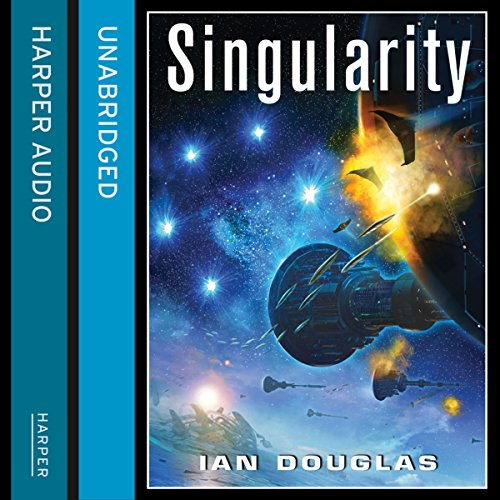 By: Ian Douglas
Narrated by: Nick Sullivan
Try for £0.00

The third book in the epic saga of humankind's war of transcendence.

There is an unseen power in the universe - a terrible force that was dominating the galaxy tens of thousands of years before the warlike Sh'daar were even aware of the existence of Sol and its planets.

As humankind approaches the Singularity, when transcendence will be achieved through technology, contact will be made.

In the wake of the near destruction of the solar system, the political powers on Earth seek a separate peace with an inscrutable alien life form that no one has ever seen. But Admiral Alexander Koenig, the hero of Alphekka, has gone rogue, launching his fabled battlegroup beyond the boundaries of Human Space against all orders. With Confederation warships in hot pursuit, Koenig is taking the war for humankind's survival directly to a mysterious omnipotent enemy.

What listeners say about Singularity

Thoroughly enjoyed listening to this book. wonderfully narrated. I definitely recommend this book. It does what a good book does. It transport you into the story.

not as great as the previous books, the performance was good but story was subpar

Give it a miss

Series started off very well, however by book 3 i getting very very tired of the constant repetition/ explanations of techno/ social and alien aspect. It's not just every book but goes on and on throughout book 3. The basic plot is sound but the constant catch ups are a turn off.