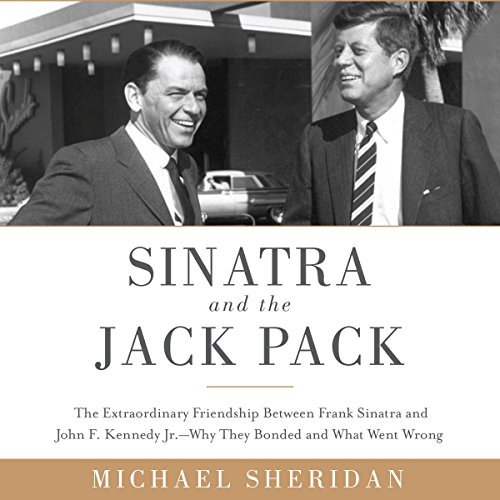 Sinatra and the Jack Pack

By: Michael Sheridan,David Harvey
Narrated by: Sean Runnette
Try for £0.00

Frank Sinatra desperately wanted to be part of John F. Kennedy, Jr.'s gang. He had his own famed "Rat Pack", made up of hard drinking, womanizing individuals like himself - guys like Dean Martin, Sammy Davis, Jr., and Peter Lawford - but the guy "Ol' Blue Eyes" really wanted to hang with was Lawford's brother-in-law, the real chairman of the board, John F. Kennedy.

In Sinatra and the Jack Pack, Michael Sheridan delves deep into the acclaimed singer's relationship with the former president. He shares how Sinatra emerged from a working class Italian family and carved out a unique place for himself in American culture, and how Kennedy, also of immigrant stock, came from a privileged background of which the young Frank could only have dreamed.

By the time the men met in the 1950s, both were thriving - and both liked the good life. They bonded over their mutual ability to attract beautiful women, male admirers, and adoring acolytes. They also shared a scandalous secret: each had dubious relationships with the mafia. It had promoted Frank's career and helped Kennedy buy votes. FBI Director J. Edgar Hoover had, over two decades, compiled detailed and damning dossiers on their activities.

From all accounts the friendship thrived. Then, suddenly, in March 1962, Frank was abruptly ejected from JFK's gang. This unique volume tells why. It will release shortly after a television documentary inspired by the book airs, is filled with a beloved cast of characters, and is the compelling, untold story of a tumultuous relationship between two American icons.

Skyhorse Publishing, as well as our Arcade imprint, are proud to publish a broad range of books for listeners interested in history - books about World War II, the Third Reich, Hitler and his henchmen, the JFK assassination, conspiracies, the American Civil War, the American Revolution, gladiators, Vikings, ancient Rome, medieval times, the old West, and much more. While not every title we publish becomes a New York Times best seller or a national best seller, we are committed to books on subjects that are sometimes overlooked and to authors whose work might not otherwise find a home.

What listeners say about Sinatra and the Jack Pack

I'm blown away by my naïvety.

The story takes you to both beginnings and how they come together. I am disheartened by the truth but it was really well done. It's opened my eyes to fame and politics.
I really recommend this and the narrator is perfect. Five stars all the way