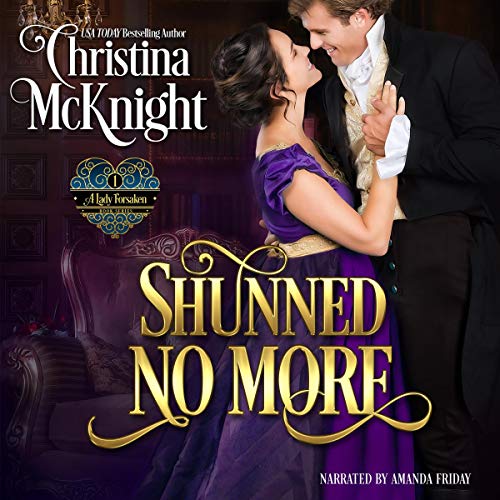 Lady Viola Oberbrook only wanted to forget the ill-fated early morning duel that took the lives of two young, wealthy, promising men of the ton and sent her fleeing for her father's country estate. Eight years later, she has her life in order: a fulfilling business, a few trusted friends, and no plans to return to London society. What she doesn't expect is to come face to face with her past.

Brock Spencer, Earl of Haversham, only wants vengeance. Recently returned from his military service to the king, his plans include repairing his family estate, finding a bride, and destroying the girl responsible for the untimely death of his twin brothers. What he doesn't anticipate is falling in love with the only woman who should never be part of his future.

What listeners say about Shunned No More

Don't waste your money like I did. Still trying to decide whether its a person reading this book or a computer generated voice. What ever it is it has only one tone with no inflections what so ever. Wish I knew how to get my money back. I will be deleting this book. If I could give it no stars I would.

This was more a reading than a performance. Given proper expectations for the presentation style, I found the reading to be well paced and clearly voiced. Amanda Friday provides an expressive reading with well moderated tone and pleasant inflection.

I love the book and I love how Amanda Friday reads it. Her voice is almost magical the way I can see everything play out before my eyes. I cannot wait to hear the rest of the series!!!!

this was a great story, the narration was wonderful. I think it's a must read

Loved the story - a great story!

I absolutely love historical romances and this was perfection! I cannot wait for the other books in the series!

Excellent narration! I got hooked into the story from the start.

I feel the author could have done much more with the story. I kept predicting plot twists that were never realized. There is never a climactic reconciliation between the main characters or with society. it just plods along with several villainous characters lurking on the side lines, but never used effectively in the story. I kept waiting for a reveal that never happened.

I found the initial premise of twins killing each other hard to accept just because they were infatuated with the same girl. I kept thinking surely the greedy cousin tampered with the guns or caused some serious misunderstanding betwwen them to result in all this misery to so many characters. I was sadly disappointed.

The wrting on whole is fine. If you are looking for an uninspired story with a happy ending, here it is.