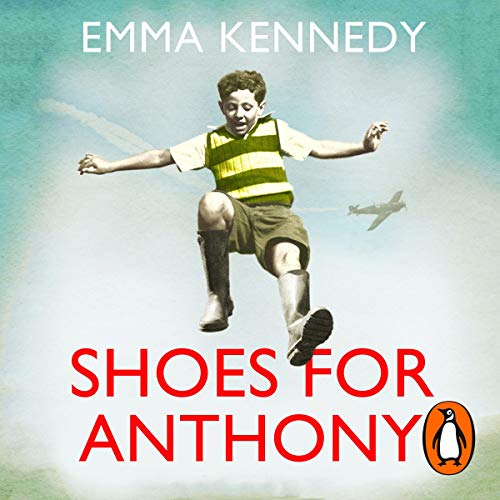 The idea of the war coming to their small, impoverished Welsh mining village always seemed remote, but with one explosive event and the arrival of the Americans preparing for the invasion of France, the people of Treherbert find their world turned upside down.

But war brings distrust, lies, and danger. And as the villagers find themselves hopelessly divided, Anthony, an 11-year-old who hasn’t had a pair of shoes in years, is going to have to choose between what is popular and what is right.

Joyous, thrilling and nostalgic, Emma Kennedy’s Shoes For Anthony will have you wiping your eyes one moment and beaming from ear to ear the next.

What listeners say about Shoes for Anthony

After reading Emma's other 2 books I wasn't sure I would enjoy this one as much so glad I was proved wrong it was excellent and Emma has the ability to keep you engaged please write some more !

I really enjoyed this book. It's a lovely story and I had tears rolling down my face at the end. Emma Kennedy is a fantastic writer and narrator and I would recommend this book. It will make you laugh out loud and cry.

Emma Kennedy is fantastic
I was addicted to this book and didn't want it to end. I've listened to and loved all her books but this is my favourite!

Reminiscent of a boys childhood during the war years. Excellent narration by the author herself.

Shoes of Anthony - loved this book

Shoes of Anthony - loved this book
The book was brill, loved the characters & everything about this book.
Good narration

One of the best I have downloaded and listened to
Thankyou Emma Kennedy!!
Can't wait to download and listen to more of your books. Don't have much time to read but always have time to listen

Having listened to two of Emma's travel books and loved them I was intrigued by her first foray into fiction. I was transfixed from the off. Shoes for Anthony is both incredibly moving but also hilariously entertaining. The story of Anthony's summer in a small mining town during the second world war is fraught with tragedy and triumph told through Anthony's own eyes. Emma's own narration is perfect. Can't recommend it highly enough.

Anything written and narrrated by Emma Kennedy is always good but in this case the story from about half way through became very predictable.

I laughed and cried in equal measure. The story takes you through a roller coaster of a ride. The narration is outstandjng and makes the story even mord powerful. I cannot recommend this book too highly. It is a must listen to.

So very good! A must listen audiobook. Wonderful characters, story and narration by Emma Kennedy!

Great story with nicely developed characters. I was caught up with the main characters almost immediately.
The narrator did a remarkable job portraying each character.
Definitely a thumbs up from me.