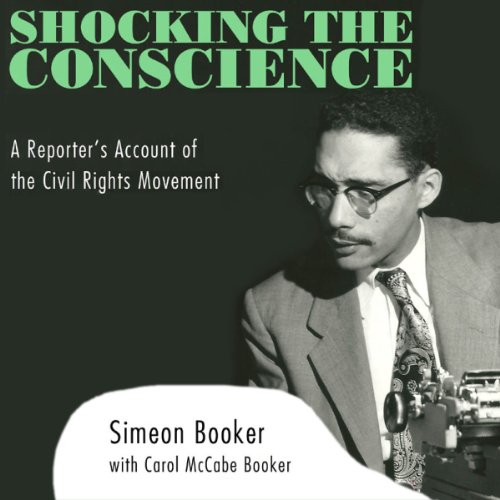 Within a few years of its first issue in 1951, Jet, a pocket-sized magazine, became the "bible" for news of the civil rights movement. It was said, only half-jokingly, "If it wasn't in Jet, it didn't happen." Writing for the magazine and its glossy, big sister Ebony, for 53 years, longer than any other journalist, Washington bureau chief Simeon Booker was on the front lines of virtually every major event of the revolution that transformed America.

Rather than tracking the freedom struggle from the usually cited ignition points, Shocking the Conscience begins with a massive voting rights rally in the Mississippi Delta town of Mound Bayou in 1955. It's the first rally since the Supreme Court's Brown decision struck fear in the hearts of segregationists across the former Confederacy. It was also Booker's first assignment in the Deep South, and before the next run of the weekly magazine, the killings would begin.

Booker vowed that lynchings would no longer be ignored beyond the Black press. Jet was reaching into households across America, and he was determined to cover the next murder like none before. He had only a few weeks to wait. A small item on the AP wire reported that a Chicago boy vacationing in Mississippi was missing. Booker was on it, and stayed on it, through one of the most infamous murder trials in US history. His coverage of Emmett Till's death lit a fire that would galvanize the movement, while a succession of US presidents wished it would go away.

This is the story of the century that changed everything about journalism, politics, and more in America, as only Simeon Booker, the dean of the Black press, could tell it.

"Simeon Booker has immersed himself in a history that many researchers have missed; he keeps opening up doors that other historians seem to have walked past. If history is a tapestry of stories, then the bright new thread running through accepted civil rights history and giving it new dimension is Simeon Booker's fresh narrative." (Hank Klibanoff, coauthor, Pulitzer Prize-winner, The Race Beat)
"During his fifty-three years as Washington, D.C., bureau chief for Jet magazine, [Booker] earned the distinction of being called 'the dean of Black journalists in the Nation's Capital.'" ( Jet)

What listeners say about Shocking the Conscience

Truly heart wrenching story of the civil rights movement,from the grotesque slaying of Emmitt till to the triumphant inauguration of the first coloured president,simeone bookers story is unique and inspiring.

Yes, learned a lot of history and Booker offered a unique perspective

What was one of the most memorable moments of Shocking the Conscience?

Definitely the story of the freedom rides

possibly... would be hard to cover all of this history in 1 movie

Not as an audiobook, because the reader was terrible.


The reader, Ronald Clarkson, was awful. He has a lovely bass voice, but his delivery seriously detracted from my enjoyment and even understanding of the text. First of all, in every sentence where it occurs, he gives primary emphasis to the word "and". That is, he not only says it louder than the rest of the sentence, he pauses significantly before it and slightly after it. Even a cliche like "wheeling and dealing" becomes "Wheeling. AND, dealing." This may sound trivial, but imagine how many times the word "and" occurs in a book, and you'll see that it's really distracting. He also gives strong emphasis to "but", so that "He went outside, but he forgot his hat," becomes "He went outside. BUT. He forgot his hat." A series of three items (and Booker is no stranger to the rule of three) becomes "Men. Women, AND, children." I always initially thought the end of the sentence had been reached after the first item. There are other similar foibles. "Such as" is always "SUCH. As..." And so on.

Booker was a reporter for Jet magazine for many years, and he covered stories like Emmet Till's murder and the integration of Little Rock Central High School. The book has a lot of fascinating detail about key events of the civil rights movement. However, it is foremost a memoir of Booker's career, rather than a civil rights history. If that's your expectation, you won't be disappointed, as he had a long and interesting career. When the book gets into later events, say after 1970 or so, it loses focus and at times degenerates into sort of highly developed name-dropping. Still, for the first two-thirds or so, it's a worthwhile read.