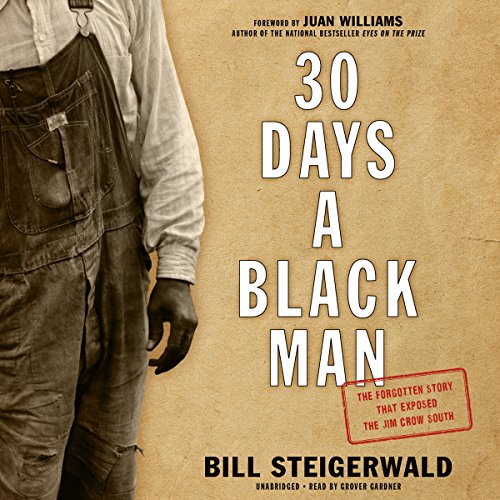 In 1948 most white people in the North had no idea how unjust and unequal daily life was for the 10 million African Americans living in the South. But that suddenly changed after Ray Sprigle, a famous white journalist from Pittsburgh, went undercover and lived as a black man in the Jim Crow South.

Escorted through the South's parallel black society by John Wesley Dobbs, a historic black civil rights pioneer from Atlanta, Sprigle met with sharecroppers, local black leaders, and families of lynching victims. He visited ramshackle black schools and slept at the homes of prosperous black farmers and doctors. The Pittsburgh Post-Gazette reporter's series was syndicated coast to coast in white newspapers and carried into the South only by the Pittsburgh Courier, the country's leading black paper. His vivid descriptions and undisguised outrage at "the iniquitous Jim Crow system" shocked the North, enraged the South, and ignited the first national debate in the media about ending America's system of apartheid.

Six years before Brown v. Board of Education, seven before the murder of Emmett Till, and 13 years before John Howard Griffin's similar experiment became the best seller Black Like Me, Sprigle's intrepid journalism blasted into the American consciousness the grim reality of black lives in the South.

old fashion journalism at its best

not the exact newspaper story more the high lights and back ground story about a white journalist who pretends to be a black man to show the deprivation black people lived with under jim crows segregation. what make it a bit depressing is that it was only 70 years ago...
well worth the time spent listening to fill in an important part of history

The truth be told

loved this book. A white man seeing and experiencing for himself, the deprivation and segregation of black people living in Jim Crows South, and revealed his experience to the world.

No value to be found

What would have made 30 Days a Black Man better?

The book had nothing. No drama, surprise, action or result. The test had far too many prefaces to what was going to be addressed and little else.

What could Bill Steigerwald and Juan Williams - foreword have done to make this a more enjoyable book for you?

Not much. This book had so little content that if the time and other references were taken away the pages would be half empty.

Not much, it is difficult to present so little. Much like a new reporter on a "no news" day.

No, if I knew how I would ask for my credit back. First book I have delegated from my download library.

No, it is not worth the effort to comment more about this book except to say I feel cheated.