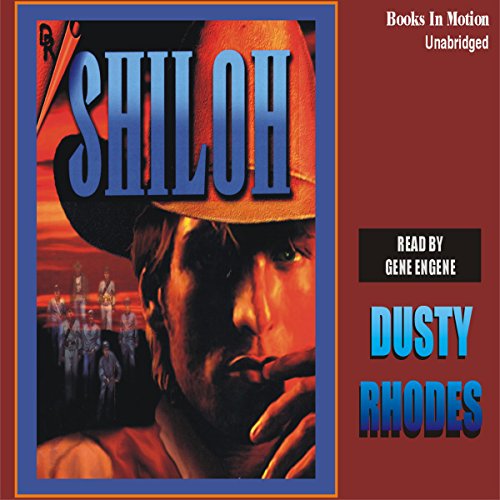 The Civil War made him a man. The battle of Shiloh made him a hero and gave him a nickname that stuck. The notorious Union prisoner of war camp made him a killer of his fellow prisoners in "Gladiator" contests in order to survive. But the killings brought haunting nightmares that wouldn't end until he settled an old score with a Union Colonel determined to see Shiloh dead.
©2002 Dusty Rhodes (P)2005 Books in Motion

End of the Civil War

This story starts in a Union run POW camp in Illinois and Shiloh is forced to fight another prisoner to the death to entertain the Union Colonel and his men. The war ends and Shiloh goes home to a town with under currents and corruption. Some one gave the Union troops the names of the boys that joined the South and their families were killed, including Shiloh's parents. Dealing with that, Shiloh, also has to deal with the Union Colonel. Lots of action and suspense and generally a good western story. Gene Engene does a great job narrating western stories. If you enjoy a good western you will enjoy this book.

Where does Shiloh rank among all the audiobooks you’ve listened to so far?

Liked everything about this book..Narration was excellent Mr. Engene always makes it interesting and the story just kept moving along at a good pace..I am kinda partial to Westerns and this one fit the bill perfectly with good characters and a good story..

Would you listen to Shiloh again? Why?

Absolutely. I enjoy Dusty Rhodes writing style and have most of his audio books. I think it takes listening to his books more than once to glean the most from his stories.

Shiloh. He was a boy with everything to look forward to when he joined the army at age 19. Everything was taken from him; primarily by the heartless Union Colonel who ran Camp Douglas, the prisoner of war death camp Shiloh was sent to. He was subjected to untold mental and physical suffering as the Colonel tried to get him killed in the gladiator games, but they couldn't kill him nor break his spirit. Even being forced to kill or be killed did not destroy his compassion nature.

Have you listened to any of Gene Engene’s other performances before? How does this one compare?

Many times, and enjoyed each performance. His performance in Shiloh was perfect. The voices fit the characters being portrayed.

If you could rename Shiloh, what would you call it?

The man who refused to die!

The supporting characters make the story even more interesting. There's the Confederate field doctor who treated Shiloh's injuries received from the barbaric gladiator games he was forced to participate in, and Lester, one of only a few fellow prisoners Shiloh counts as friend. Shiloh, still injured from his last fight, was told he had another fight the next day with an experienced knife fighter. Lester comes up with an ingenious plan to help the injured Shiloh beat the Cajun knife fighter. As well as an array of other characters.