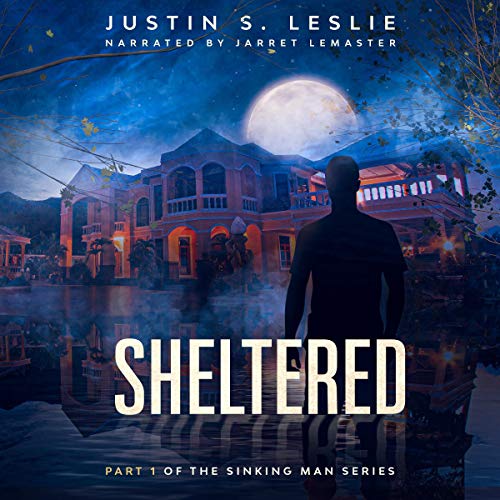 Sheltered follows Ben’s journey in Northeast Florida to reunite with his wife, Sarah, and survive a world full of zombies. This limited-run series is set to be released as novella shorts. Yes, the zombies are the problem, not everyone you run into. The Sinking Man series is written to have several short novellas released throughout the year and is geared toward TV adaptation.

Ben and his wife, Sarah, had a front-row seat for the apocalypse. Unfortunately, they were from different sides of the country. Separated by a ravaging virus, the couple finds themselves struggling to reunite during a time that feels like the end of days.

While Ben sat in his secluded upscale riverside house, infected people ravaged the countryside. The plan was simple. If either of them ever got separated, they would make their way home.

Fans of Keith C. Blackmore, Robert Kirkman, and Max Brooks, will want to listen to this series!

What listeners say about Sheltered

Waiting on the TV Series!

Enjoyed this spin on current events with a sci-fi fiction twist! Ready the next installment!

whens the next one?

not much of a zombie kind of person but gave this book a try and wow. can't wait for the next one.

Give it a listen!

The story is about Ben, who has been in isolation since the zombie apocalypse started, finally going out into the world again when he gets a message from his wife after not hearing from her for months. Once he finally gets out, he realizes that he has been living in a bubble, and that there are dangers out there that his wife Sarah is going to have to get through.


Can't wait to know what happens next!

Very promising start to the series!

I really enjoyed this story! If you follow my reviews, you have probably noticed that I am a rather eclectic reader. There just aren't a lot of genres that I won't read but there are a few that I tend to enjoy more than others and I cannot resist a good end of the world story. Throw in some zombies and I am even happier. I was really excited to read this novella-length piece and I ended up having a fantastic time with it.

Ben has spent the past year in his house in a wealthy neighborhood. Ben and his wife were prepared for an apocalypse with a nice cache of supplies and an extensive solar power set up. Ben has been alone this whole time as his wife, Sarah, was needed to help with the outbreak. Ben decides that he needs to leave his isolated safety and leave a message for his wife whom he thinks is on her way back home.

I really liked the setup of this story. Instead of a desperate person with no supplies, Ben is a well-prepared man whose biggest problem during the apocalypse has been a case of loneliness. When he heads out, he does not know what he is going to find. He has encountered zombies in his neighborhood but in a limited number. Ben was a great character and I thought that he was more than capable. There were a couple of additional characters introduced and I found them to be very likable as well.

Jarret Lemaster did a wonderful job with this story. I don't believe that I have had the opportunity to listen to this narrator before but I really liked what he did with this story. I thought that he was able to bring Ben to life quite well and that he added a lot of excitement to the story. He had a very pleasant voice and I believe that his narration added to my enjoyment of the story.

I would recommend this book to others. This was a great start to a very promising series. I thought that this book had great characters with enough action (and zombies) to keep things very interesting. I cannot wait to see what happens to this group of characters in the next installment.

I received a review copy of this audiobook from the author.