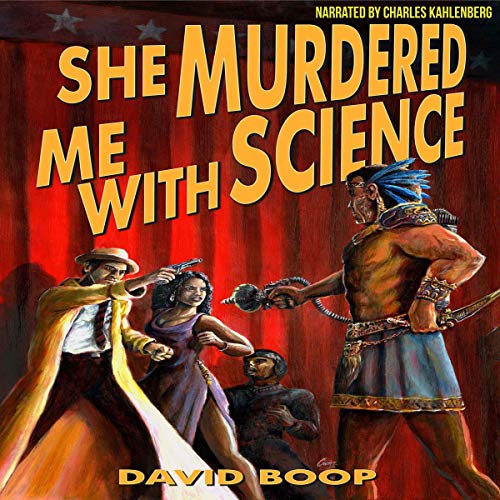 She Murdered Me with Science

She Murdered Me with Science

It's 1953, and disgraced scientist Noel Glass works as a PI to redeem himself for a deadly experiment that cost the lives of six people, including his fiancée's. In walks a rich recluse who offers information that Glass was framed for the deadly accident. As Glass struggles to clear his name, he uncovers an evil organization bent on using his own invention for world domination.

Who can Glass trust when everyone is keeping secrets? His mysterious Japanese sidekick - Wan Lee? The sultry blues singer - Merlot Sterling? The man-mountain bodyguard - Vincent Richmond?

From the desolate streets of Industry City, Colorado, to a showdown in Chi-town, Glass encounters death at every turn. As he's pursued by two Mayan hit men determined to make him history, Glass must rediscover the self he lost years ago and face off against the one ghost he swore he laid to rest.

She Murdered Me with Science blends detective noir with the pulp science fiction of the '40s and '50s. A child science prodigy, Glass uses forensics to solve crimes long before it was considered a legitimate resource for the police. He's part Sherlock Holmes - part Mike Hammer. Through his quest, Glass interacts with historical figures like J. Edgar Hoover, DNA scientist James Watson, and photojournalist Art Shay. The story interweaves true events from the beginnings of the Cold War era with a fictional Armageddon.

Glass also gets drawn into the growing racial tensions of the times, including the Trumple Park Riots, because of his femme fatale, the chanteuse Merlot. Cut from classic females of the era, Merlot takes no prisoners on stage or in the bedroom.

She Murdered Me with Science is laced with the blues, packed with action, and armed to kill.

She murdered me with Science.

I enjoyed reading this book.
I like the noire feel to it.
Keep writing David Boop.