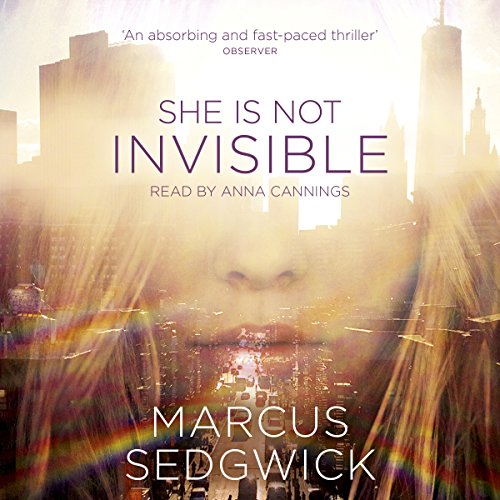 She Is Not Invisible

She Is Not Invisible

Prize-winning author Marcus Sedgwick explores obsession, trust and coincidence in this gripping thriller. Sixteen-year-old Laureth Peak's mission is to find her missing father. A mission made all the more difficult by one fact: Laureth Peak is blind.

Laureth's father is a writer. For years he's been trying, and failing, to write a novel about coincidence. His wife thinks he's obsessed. Laureth thinks he's on the verge of a breakdown. He's supposed to be doing research in Austria, so when his notebook shows up in New York, Laureth knows something is wrong.

On impulse, she steals her mother's credit card and heads for the States, taking her little brother Benjamin with her. Reunited with the notebook, they follow clues to find their wayward father. But the challenges and threats that lie ahead are even tougher for Laureth than they would be for any other teenager - because Laureth has no vision to guide her.

Read from braille by Anna Cannings, featuring an author's note read by Marcus Sedgwick and a bonus conversation between the author and reader.

What listeners say about She Is Not Invisible

As a partially sighted person I could identify with a lot of what Laureth was experiencing. The author seems to have really done his research and this wasn’t another book where the blind person is the victim. It shows her strength of character and how she adapts and copes and at the same time how cruel people can be. It was great that it was read from Braille. The only reason I didn’t give the reader 5 stars was I felt she babied Laureth a bit who is supposed to be 16. Otherwise she did a fantastic job

Outstanding in every way

This is so good - it had me gripped throughout! It is full of surprises and the characters are just wonderful. I am missing it already ...

Loved this story. Beautifully read. My 12 year old son didn't want me to buy this but absolutely loved it once we started listening. Beautifully written. Would recommend. Great story. LOVED IT

A very enjoyable insightful story on lots of different levels. Enjoyed the maths, enjoyed the coincidences and most of all the insight into the world of the visually impaired.

I had heard a lot about this book and everyone said it was great. I really enjoyed it and will be recommending it to lots of people 👌👌

What made the experience of listening to She Is Not Invisible the most enjoyable?

What was one of the most memorable moments of She Is Not Invisible?

The last line - it's interactive!

I'm not sure! It was all good!

It made me quite happy, and proud of the character!

If you could sum up She Is Not Invisible in three words, what would they be?

What other book might you compare She Is Not Invisible to, and why?

Difficult, as I've not read anything quite like it! It is similar in some ways to Haddon's 'The Curious Incident of the Dog in the Night Time' in that the story follows two unusual children on a quest to solve a mystery, but they are certainly more charming than poor old Christopher Boone!

Have you listened to any of Anna Cannings’s other performances? How does this one compare?

I haven't, but she read this ABSOLUTELY BEAUTIFULLY! Perfect pace, tone and expression, and she had me giggling at the funny moments and crying during the more emotional scenes. Bravo!

If I had the time, I certainly would have! I think I managed it in 4.

For a more in-depth review, have a look at my blog: http://literary-loves.blogspot.co.uk/2014/07/book-review-she-is-not-invisible-by.html